The Center of Who We Are 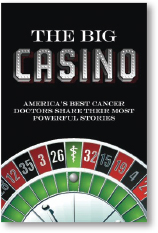 The following essay by Eric M. Genden, MD, is adapted from The Big Casino: America’s Best Cancer Doctors Share Their Most Powerful Stories, which was coedited by Stan Winokur, MD, and Vincent Coppola and published in May 2014. The book is available on Amazon.com and thebigcasino.org.

There’s nothing more terrifying than having a cancer in the head and neck region—it’s the core and center of who we are—and to understand that it has to be removed or radiated or burned.

No one marches for head and neck cancer. Unlike the pink-clad legions of breast cancer survivors, head and neck cancer patients often dwell in the shadows, dreading the workplace and avoiding the favorite restaurant or the friendly gin rummy game that was so much a part of their lives.

My specialty, otolaryngology, is arguably different from every other type of surgery—particularly when it encompasses oncology—because there is no place you can do surgery on the human body that more affects the center of who we are. We express ourselves by speech and articulation, by the movement of our eyes and facial expressions. When we socialize with family and friends, we eat, we get a cup of coffee or something to drink; we break bread. Unfortunate as it is, much of how we do in life is based on our physical presentation.

Head and neck cancer surgery almost always impacts all these things. Whether it’s a surgical procedure on the tongue, the upper jaw, or the skull base, the ability to speak, socialize, move the face—to self-express—is affected, which is a reason suicide and depression rank high among head and neck cancer patients. Unlike breast or abdominal surgery, you can’t put a shirt on and make these scars or this deformity disappear. There’s no way to hide it.

During the past decade, minimally invasive surgical approaches and methods of reconstruction have become critically important in addressing these terrible challenges. Probably most significant has been the introduction of robotic surgery.

In the past, if someone had a cancer in the back of the throat, to get back there and remove it safely we had to undertake a 15-hour surgery: cutting through the lip, the mandible (jaw), and the muscles of the floor of the mouth to open up and swing the jaw, much the way you’d open a book. The patient would be hospitalized for 15 days, with a 10% to 20% possibility of a permanent feeding tube or breathing tube. All this to resect a tumor no larger than a walnut.

About 7 years ago, we introduced an approach in which a surgical robot (Intuitive’s daVinci™ system) is inserted through the mouth, and a laser is used to resect and remove the tumor. Instead of 14 hours, it’s a 2.5-hour surgery; the patient is hospitalized for 1 or 2 nights and is eating and drinking the next day. Most remarkably, it obviates the need for a potentially deforming facial incision. As a surgeon, when you don’t have to essentially decouple a patient’s jaw and face, you become a believer [in this technology] very, very quickly.

The first two institutions in the world to adapt this technology—which was originally designed for cardiac, abdominal, and urologic applications—were Mount Sinai (where I serve as Chairman of the Department of Otolaryngology) and the University of Pennsylvania (Penn Medicine).

We can’t do robotic surgery in every case, but there just happens to be an epidemic of human papillomavirus (HPV)–induced cancers in people ranging in age from 35 to 70. In the next 5 years, these cancers will surpass cervical cancer in women in terms of prevalence.

For 100 years, patients who developed throat cancers have typically been smokers and drinkers, genetically predisposed to cancer and unable to repair the ravages of tobacco and alcohol. Such squamous cell carcinomas are aggressive and can afflict multiple areas, so the treatment needs to be equally aggressive—big surgeries with chemotherapy and radiation therapy.

Most cancers in the head and neck are classified as squamous cell carcinoma, but they are more than one disease. Unfortunately, most oncologists are treating patients with HPV-induced cancer with the regimens designed for smokers and drinkers with aggressive squamous cell carcinoma. In many cases, the side effects of these treatments dramatically impair a patient’s quality of life.

HPV-induced squamous cell cancers are focal. The virus inoculates an area of the tonsil and creates a chronic infection that leads to a cancer, but, typically, the whole upper aerodigestive tract is not afflicted. These cancers are amenable to surgical removal with the robot. As a result, 20% of HPV-induced cancer patients will not require any radiation; 40% require radiotherapy—but in a reduced dose that significantly reduces acute toxicity and long-term chronic toxicity.

How does this play out in terms of quality of life? I’ve seen a well-known chef with HPV-induced throat cancer who was scheduled to undergo high-dose radiation and chemotherapy. He was 47 years old, a guy whose entire life revolved around his ability to taste the finest changes in food. Without question, chemotherapy and radiation would have destroyed his career. It’s no different from removing the vocal cords of a singer or amputating a surgeon’s hand. Since his procedure, he’s been cancer-free for 4 years and has opened two more successful restaurants. (See “It Sounds Crazy, but Cancer Has Made Me a Better Chef,” in the December 1, 2013, issue of The ASCO Post.)

Medicine Is Who I Am

Ultimately, our patients become mirrors on which our own lives and careers are reflected. My father was a Navy fighter pilot who served three tours during the Vietnam War. Like the character in the movie The Great Santini, he was a perfectionist who insisted I follow in his footsteps. When I told him it just wasn’t in the cards, he said, “Well, if you have to go into medicine, for God’s sake, be a surgeon! On the flight deck, the only people we respect are the flight surgeons!”

And so I did. I like to think I inherited my father’s passion and focus.

Like flying Phantom jets, medicine is not a job but a way of life. It becomes who you are. Some people go to work and leave work and can put it all behind them; then there are others whose work, life, and family all intersect. There is no division. It’s not a thing you can face or misinterpret. It is the essence of who we are as doctors.

Coming Face to Face With the Unknowable

As I’ve grown older, I find myself staring more deeply into the mirror. When I was a young surgeon, the challenge was to get patients to survive, to beat the cancer, and to get them reconstructed. My questions were, “Are you swallowing food? Are you able to eat without difficulty? Is there much pain?”

Now I’m more focused on the deeper quality of life. Do they go out in public and feel good about themselves? Are they interacting with their family? Do they wake up every morning and say, “Boy, I’m glad I’m alive! Life is good for me and better than I had expected!”?

Fulfillment comes with putting people back into society. With head and neck cancer, you can cure a lot of people, but that doesn’t mean you’re putting them back in the workforce. At Mount Sinai, we’ve been able to do that. We have a strong belief that quality of life and the ability to function are as important as removing the cancer.

Finally, in the mirror, we come face to face with the unknowable: things that seemingly defy the hard and fast dictates of science and medicine and carry us to some higher plane, where courage and determination, and yes, love are all that matter.

Early in my career, an Indian woman with a horrible oral cancer came to see me. She’d had about six or seven operations. Now the tumor had come back in quite an extensive way. These were the days when we first started removing pieces of the jaw and the tongue and rebuilding them by transplanting tissue. We didn’t have a good way to do it. It would leave people so badly deformed they couldn’t eat or drink.

She’d been to all the local places and had been turned away. I said, “Look, your tumor is too advanced. You need to have palliative care and pain control because there’s not much we can do.”

She begged and begged me to help her. “Why don’t you come back next week, and we’ll align you with our oncologists,” I finally said. “They’ll give you palliative chemotherapy.” When she came back, she brought her 7-year-old daughter with her. At one point, the patient stepped away for a moment and the little girl essentially said to me, “You have to help her. You have to operate on her because if you don’t, nobody else will.”

It was the first time, in fact, the only time, this has ever happened to me. I told her there was probably a 5% chance she’d actually beat this cancer, but we’d give it a try. We took out her jaw and half her tongue and rebuilt the jaw and tongue using the bone and skin from her lower leg.

Now, it’s 15 years later, and I still get cards from her and her daughter. The little girl has graduated from college. And she still has her mom with her. I can see them in the mirror. ■