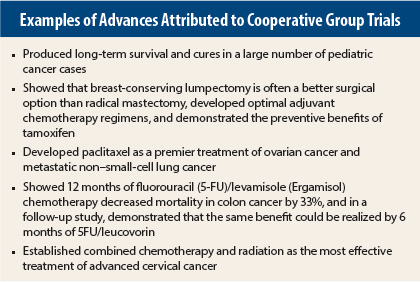 We owe it to our cancer patients to make sure that the transition [to the National Clinical Trials Network] does not erode the unique spirit of sheer scientific pursuit, volunteerism, and camaraderie that characterized the cooperative groups’ successes.

I have told the leadership of SWOG that their group’s $120 million per year budget is a lot of money.… Spend the $120 million more wisely, and make the benefit of the trials more obvious. The groups can do this without turning to the pharmaceutical industry for money.

Over the past 5 decades, National Cancer Institute (NCI) Clinical Trials Cooperative Groups have played an enormous role in the fight against cancer, tackling a broad social agenda, including cancer prevention, quality-of-life issues for patients with cancer, and comparison of benefits among different treatment combinations. Given a steady decrease in government funding, however, more institutions are turning toward industry-funded trials, which are much less likely to spend resources on important public health issues addressed by the NCI-funded Cooperative Groups. It has become clear that to remain competitive in our challenging fiscal climate, the Cooperative Groups need to rethink their strategy.

After World War II, scientific and medical research increased exponentially in the United States. In 1950, funding for medical research stood at $161 million. The National Institutes of Health (NIH) opened its clinical center in Bethesda, Maryland, as a research hospital in 1952. With the aid of the emerging science of biostatistics, regulators began to appreciate and interpret the various nuanced components of trial design and their effect on how data are analyzed.

The concept of cooperative group trials was conceived in 1955 by individuals including Sidney Farber, MD, Mary Lasker, and others who sought increased funding from Congress to support new studies of cancer chemotherapy. As a result, the NCI formed a Clinical Studies Panel, and during one of its meetings, it concluded that leukemia research could move ahead more quickly if they worked together on a “cooperative group.” This method had already been used successfully in Veterans Administration hospitals in the study of tuberculosis.

In 1955, Congress appropriated $5 million for the NCI, which established the Chemotherapy National Service Center. Several cooperative groups were organized, including the Southwest Cancer Chemotherapy Study Group, which was funded in 1956 as a pediatric oncology group. By 1958, 17 institutional networks had been organized under NCI grants, and this system evolved and matured over the ensuing years to become the NCI Clinical Trials Cooperative Group Program, with funding provided through cooperative agreements.

Today, the NCI actually sponsors and coordinates two key areas of trials: the Cooperative Group Program that administers clinical trials focused on cancer treatment, and the Community Clinical Oncology Program Network (designed in 1983), which primarily conducts trials centered on cancer prevention and control. Now, the very system that was the catalyst for paradigm-changing clinical trials is at a crossroads.

“Cancer institutions increasingly cannot afford to conduct public NCI-funded research, and that forces investigators toward drug industry studies. Many of these decisions are now being made on economic grounds,” said Laurence H. Baker, DO, former Chair of the Southwest Oncology Group (SWOG).

For the past 50 or so years, the NCI’s Clinical Trials Cooperative Group Program has played a central role in improving cancer care. In 1971, Bernard Fisher, MD, the founding Director of the National Surgical Adjuvant Breast and Bowel Project (NSABP), led the NSABP B-04 trial comparing radical mastectomy vs total mastectomy with or without radiation. The trial confirmed Dr. Fisher’s daring hypothesis that breast cancer was not necessarily limited to the breast and surrounding tissue, but was potentially a systemic disease that infiltrates distant organs in the body.

The groundbreaking NSABP trial demonstrated that the standard-of-care Halsted radical mastectomy had no therapeutic advantage in breast cancer. At the time, challenging the Halsted radical mastectomy was tantamount to medical heresy, yet a cooperative group trial led by Dr. Fisher did just that, and in the process, forever changed for the better our approach to breast cancer surgery. This famous example of an NCI-funded group trial underscores why the cooperative group model is vital to developing and refining new cancer treatments and disseminating results to the medical community and the general public.

In 2010, the Institute of Medicine (IOM) released a report, “A National Cancer Clinical Trials System for the 21st Century: Reinvigorating the NCI Cooperative Group Program.” The goals of the report were largely oriented toward improving the speed and efficiency of the design, launch, and conduct of clinical trials. ASCO Chief Medical Officier Richard L. Schilsky, MD, FASCO, served on the IOM’s committee that wrote the report on cooperative group programs.

“It’s important to understand that the cooperative groups don’t operate in a vacuum. They are in partnership with the NCI, and they also interface with other agencies such as the [U.S. Food and Drug Administration (FDA)] and NIH, as well as with pharmaceutical companies. The groups have largely met the IOM report metrics set out by an NCI group called the Operational Efficiency Working Group. One concrete improvement set out by the IOM report is a drastic reduction in the time to launch a study,” said Dr. Schilsky.

He noted that the most significant outcome of the IOM report was the wholesale consolidation of the cooperative groups program. “The IOM report only recommended that various common functions within the groups should be harmonized, but the NCI actually forced group consolidation by declaring that the agency was only going to fund four adult cooperative groups,” said Dr. Schilsky. “The choice the groups faced was to compete against each other for funding or align themselves to optimize their chances at getting as much funding as possible.”

He explained that the NCI’s primary goal was to create a network, the National Clinical Trials Network (NCTN), which would comprise the four remaining adult cooperative groups and the Children’s Oncology Group and would function in a highly organized way to conduct a new generation of trials evaluating targeted therapies. “Not surprisingly, the merger process was complicated, taking away valuable time needed to initiate studies. That issue, coupled with NCI’s budget cuts, has greatly reduced the number of studies launched by the cooperative groups over the past few years. The accrual rate is only about 60% of what it was during the groups’ most productive years,” said Dr. Schilsky.

“For many years, the criticism faced by the cooperative groups could be traced to a couple of core issues. One is chronic underfunding and the other is excessive oversight, and neither of these problematic issues has been remedied in the wake of the IOM report. The funding is worse than it’s ever been, and the oversight is more suppressive than ever,” said Dr Schilsky. He stressed that if those core issues are not addressed in a meaningful way, it will not be possible for the cooperative groups to meet their full potential.

Asked about the pharmaceutical industry’s increasing leverage in cancer clinical trials, Dr. Schilsky said, “There are an increasing number of collaborative studies between the cooperative groups and commercial industry, and this is driven largely because most of the interesting drugs are coming out of the pharmaceutical labs. These public-industry partnerships have been going on for years, and one can access an NCI list of successful new drug indications that were directly related to this collaboration,” said Dr. Schilsky. He noted that the cooperative groups conducted all of the trials that have established the effective combined-modality therapies that have become standard of care in oncology.

“Moreover,” added Dr. Schilsky, “all of the prevention strategies that are known to be effective are a result of cooperative group studies—and the list goes on and on [see sidebar]. If the country feels that these kinds of studies are important, they will only happen through public funding.”

“The IOM report indicted several flaws within the cooperative groups as well as in its partner, the NCI. I’d posit that prior to the report, SWOG recognized those flaws and was working on ways to address and remedy those issues,” said Dr. Baker, referring to his tenure as SWOG Chair.

Problems identified by the IOM aside, Dr. Baker said it is vital to consider what the alternative is to the clinical trials network. “Without a robust cooperative group system, we would revert to a Pharma-sponsored clinical trial system, which in my opinion is too often illustrative of having the bar set too low. The result is having drugs with marginally modest benefit getting FDA approval, passing on exorbitant costs to our health-care system,” remarked Dr. Baker. “Moreover, there is no government oversight of drug pricing in accordance with efficacy. The FDA contends pricing is not the Agency’s mandate, but of course it could be.”

He continued, “While I was Chair of SWOG, I told the leadership and members that they were addicted to new drug development. I believe that this cultural addiction to new agents runs across all the groups, not just SWOG. The cooperative groups have world-class expertise in conducting randomized prospective clinical trials, the gold standard of evidence.  But in my opinion, over the years the groups have shifted their interest in using models to improve patient outcome, and are far more interested in drug development.”

Lack of NCI-funding is the principal reason cited for the increasing shift toward industry-funded clinical trials. To that, Dr. Baker responded, “I have told the leadership of SWOG that their group’s $120 million per year budget is a lot of money. We should tap into the volunteerism of the American physician networks that are leading these groups. Spend the $120 million more wisely, and make the benefit of the trials more obvious. The groups can do this without turning to the pharmaceutical industry for money.”

Is Change for the Better?

Dr. Schilsky said that the cooperative groups’ traditional model that began 50 years ago was based on investigator-initiated clinical trial networks, whereby the ideas percolated up from the researchers inside the groups, with the best ideas being implemented into clinical trials. “However, NCI’s creation of the NCTN will revert the power to a small number of individuals on steering committees within the NCI. They will decide what clinical trials will be done. It’s a very different model with a narrower vision, and I’m not confident that it will produce the same kind of very successful public health studies that the cooperative groups have.”

Recalling his time as Chair of the CALGB, Dr. Schilsky said, “It was a great experience because it gave me the opportunity to lead an enterprise that could accomplish practice-changing research that improved outcomes for patients. All of my predecessors felt the same way. But we wouldn’t have had the same intense drive if we were burdened by today’s unneeded paper-shuffling and having protocols imposed on us from outside entities,” said Dr. Schilsky.

Under the principal mandate of public health, the cooperative group model has bettered the quality of life for American cancer patients. The system is not perfect, and its most ardent defenders understand that well-reasoned modifications would improve the groups’ performance. But as Dr. Schilsky pointed out, the groups’ evolution to the NCTN is not without peril. “We owe it to our cancer patients to make sure that the transition does not erode the unique spirit of sheer scientific pursuit, volunteerism, and camaraderie that characterized the cooperative groups’ successes,” stressed Dr. Schilsky. ■