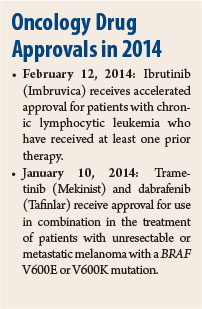 The U.S. Food and Drug Administration (FDA) has granted full approval to omacetaxine mepesuccinate (Synribo) for injection. The full approval was based on the final analysis of two phase II trials that evaluated the efficacy and tolerability data of omacetaxine. The agent received an accelerated approval in October 2012 for adult patients with chronic-phase or accelerated-phase chronic myeloid leukemia (CML) with resistance or intolerance to two or more tyrosine kinase inhibitors.

The original approval of omacetaxine mepesuccinate was based on an analysis of combined data subsets from two phase II, open-label, multicenter studies. The pooled analysis included patients who had received two or more approved tyrosine kinase inhibitors and, at a minimum, had evidence of resistance or intolerance to dasatinib (Sprycel) and/or nilotinib (Tasigna). Treatment with imatinib (Gleevec), dasatinib, and nilotinib had failed in 47% of chronic-phase patients and 63% of accelerated-phase patients; the majority of patients had also received other treatments including hydroxyurea, interferon, and cytarabine.

February 12, 2014: Ibrutinib (Imbruvica) receives accelerated approval for patients with chronic lymphocytic leukemia who have received at least one prior therapy.

January 10, 2014: Trametinib (Mekinist) and dabrafenib ­(Tafinlar) receive approval for use in combination in the treatment of...