Minimal Residual Disease Before and After Transplant: What Does It Mean? 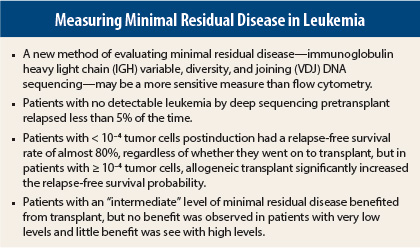 Detection of any tumor in the first 90 days after transplant by this method is also highly predictive of relapse and survival.

In patients with acute leukemia, outcomes after hematopoietic stem cell transplantation are negatively impacted by the presence of minimal residual disease. However, transplant can prolong survival in patients with minimal residual disease after consolidation, according to two studies presented at the American Society of Hematology (ASH) Annual Meeting, and further discussed at the ASH Highlights of North America meeting in Miami.

A new method of evaluating for minimal residual disease—immunoglobulin heavy light chain (IGH) variable, diversity, and joining (VDJ) DNA sequencing—was used in the ASCT0431 study of the Children’s Oncology Group/Pediatric Blood and Marrow Transplant Consortium. The study involved patients aged 1 to 21 years undergoing stem cell transplantation for high-risk acute lymphoblastic leukemia (ALL) in first complete remission or second. Bone marrow samples were taken within 2 weeks of the preparative regimen and at 1 month, 3 months, and 9 to 12 months after transplant, and were subjected to IGH VDJ sequencing.

Deep-sequencing techniques were able to define clones in more than 95% of patients. Detection of blasts at any level, either pre- or post-transplant, predicted for worse event-free survival.

“With any tumor present, there was a high risk of relapse,” Dr. Chao reported.

The authors of the study concluded, “Patients with no detectable leukemia by deep sequencing pretransplant relapsed less than 5% of the time, a striking improvement compared to our previous ability to predict relapse.… Detection of any tumor in the first 90 days after transplant by this method is also highly predictive of relapse and survival.”

Dr. Wieduwilt also included this study in his “highlights” in ALL. He noted that event-free survival at 2 years was only 28% for patients with minimal residual disease.

Studies in Adults With ALL

French investigators reported the results of a large study in 522 high-risk patients in first complete remission, of whom approximately half went on to stem cell transplantation and half did not.2 They assessed the impact of transplant according to level of minimal residual disease at complete remission, and concluded that residual tumor could be “a powerful tool” to select patients who might benefit from the procedure.

In a study from China, the amount of minimal residual disease was important.3 The study included 107 adult patients, of whom 62 underwent transplant and 45 had chemotherapy only; all received induction and consolidation and had minimal residual disease evaluated by flow cytometry. In chemotherapy-only patients, the researchers used the time point of first complete remission, while patients undergoing transplant were also evaluated just prior to the procedure.