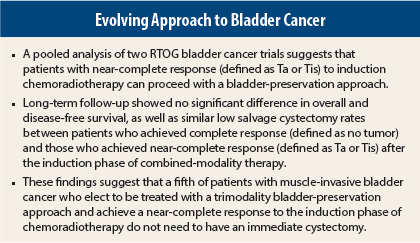 Organ preservation is a hallmark of progress in the world of cancer management. For patients with muscle-invasive bladder cancer, the bladder-sparing approach is a well-established alternative to radical cystectomy. Patients undergo cystoscopic evaluation between the induction and consolidation phases of chemoradiation, and patients with an incomplete response to the induction phase are promptly offered cystectomy. A retrospective pooled analysis of two multi-institutional trials found no difference in disease-specific, bladder-intact, and overall survival between patients with a complete response or near-complete response to induction chemoradiation.1

“These results suggest that it is appropriate to recommend that patients with near-complete response to induction chemoradiation be continued on bladder-preserving therapy,” said lead author Timur Mitin, MD, PhD, of the Department of Radiation Medicine at the Oregon Health and Science University, Portland.

The study was based on a pooled analysis of two Radiation Therapy Oncology Group (RTOG) trials (9906 and 0233) to determine long-term outcomes among patients with muscle-invasive bladder cancer who achieve either complete or a near-complete response after induction chemoradiotherapy. Results were presented at the 2014 Genitourinary Cancers Symposium in San Francisco.

Bladder-conservation therapy has been around in Europe and North America for about 4 decades, but the current backbone of the trimodality bladder-preservation approach, used in the United States, includes maximal transurethral resection of bladder tumor (TURBT), followed by radiation with concurrent chemotherapy, Dr. Mitin explained. Patients undergo cystoscopic evaluation with biopsies after the first phase of chemoradiation induction. Patients with complete response go on to receive a consolidation phase of chemoradiotherapy. Otherwise patients undergo radical cystectomy, he said.

“Historically, complete response after cystoscopic evaluation has been defined as T0 (no tumor), but many physicians have been reluctant to offer radical cystectomy to patients with only a small amount of noninvasive tumor (Ta) or carcinoma in situ (Tis), following induction chemoradiation,” Dr. ­Mitin told the audience.

Both trials had relaxed criteria for requiring salvage cystectomy and allowed patients with Ta or Tis after the induction to continue with consolidation chemoradiation. RTOG 9906 was a single-arm trial of 80 patients who received paclitaxel/cisplatin plus twice-daily radiation following transurethral resection of bladder tumor. RTOG 0233 was a phase II trial that randomly assigned 97 patients post–transurethral resection of bladder tumor to twice-daily radiation with either paclitaxel/cisplatin or fluorouracil/cisplatin. The radiation dose and techniques were the same in the two trials.

“Although this is a small retrospective analysis, there is no apparent difference in bladder recurrence and salvage cystectomy rates between complete responders and near-complete responders as judged at the time of cystoscopic evaluation after the induction phase of bladder-preserving trimodality therapy,” Dr. Mitin emphasized. n

This study has the potential to expand the number of patients who can benefit from organ-sparing therapy,” said Thomas W. Flaig, MD, Associate Professor in the Division of Medical Oncology at the University of Colorado Denver, commenting on the pooled analysis of RTOG 9906 and 0233 presented at the ...