In the ongoing debate over how to control rising cancer care costs, it is vital to identify usage patterns of expensive new technologies. A recent study examined the relationship between Medicare reimbursement and the increasing use of intensity-modulated radiation therapy (IMRT).1 The ASCO Post spoke with the study’s lead author, Benjamin D. Smith, MD, Assistant Professor, Department of Radiation Oncology, The University of Texas MD Anderson Cancer Center. 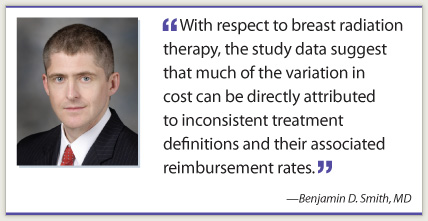 Over the past decade, the use of advanced radiation technologies has risen rapidly in the management of many solid cancers. For breast cancer, radiation practice patterns have shifted from conventional two-dimensional therapy to a more refined three-dimensional approach using computed tomography planning. The ultimate goal in the development of new radiation therapies is to eradicate tumor cells and do as little harm as possible to healthy tissue.

“Two randomized trials have compared intensity-modulated radiation therapy with conventional radiation therapy in women with breast cancer who had lumpectomy,” said Dr. Smith. “Both trials showed a significant improvement in side-effect profile in the IMRT arms, especially in long-term cosmesis of the breast.”

The important question, however, is whether the benefits from IMRT are justified by the cost of this technology, particularly when less expensive alternatives that yield similar target dose coverage and normal organ-sparing are readily available.

Using Surveillance, Epidemiology and End Results (SEER)-Medicare data, the researchers looked at 26,163 women with localized breast cancer who had undergone surgery and radiation from 2001 to 2005.  They found that Medicare billing for IMRT increased from 0.9% of patients diagnosed in 2001 to 11.2% of women whose breast cancer was diagnosed in 2005.

The average cost for radiation treatment during the first year was $7,179 for non-IMRT and $15,230 with IMRT. Moreover, billing for IMRT was more than five times higher in regions across the nation where the local Medicare coverage determinations were favorable to IMRT compared to regions where coverage was unfavorable.

Dr. Smith explained that although IMRT has been shown to lower toxic effects for patients receiving whole-breast irradiation, less expensive, relatively simple techniques might suffice. “Inverse planning—optimizing treatment configurations by calculating backwards from the prescribed dose, rather than through trial and error—is a prerequisite to IMRT billing; however, it is more expensive because of the increased physician and treatment planning time involved. Moreover, the less expensive field-in-field planning is likely to have similar outcomes,” said Dr. Smith.

Dr. Smith concluded, “With respect to breast radiation therapy, the study data suggest that much of the variation in cost can be directly attributed to inconsistent treatment definitions and their associated reimbursement rates authorized by the Medicare program and its intermediaries.”

Past President of the American Society for Radiation Oncology (ASTRO) and Director of the Radiation Oncology Residency Program at Massachusetts General Hospital, Anthony L. Zietman, MBBS, MD, weighed in on radiation therapy practices in prostate cancer that also drive up costs.

According to Dr. Zietman, prostate cancer is unlike most other malignancies in that a significant amount of the cancers detected on screening do not need treatment simply because they will not prove fatal during the course of the man’s lifetime. “As clinicians, we need to learn to use restraint and understand that not all men presenting with prostate cancer need treatment, especially older men. Most of the major cancer organizations are getting that message out; however, many of us are not practicing what we preach,” said Dr. Zietman.

He cited several reasons for the overtreatment phenomenon in prostate cancer. “It is much easier to treat a patient and be a hero than it is to make the decision not to treat. It pays much better to treat than to follow a patient and do periodic biopsies. And of course we have the legal aspect: In the United States we are afraid of giving fewer medical services for fear of a malpractice suit, so in turn we end up, in many instances, giving too many services,” said Dr. Zietman. “Of course, our diagnostic systems are not perfect. Just because I think a prostate cancer is small and mild, sometimes I’m wrong and there is more cancer lurking around than I thought. It is a complicated issue,” he added.

“That said, in radiation oncology, our first question should be, not how should I treat this patient, but whether I should be treating this patient at all. Just as medical oncologists are drawn to new biologics, we in radiation are seductively drawn to the most sophisticated new technologies out there, many of which do not have proven value over standard treatments,” stressed Dr. Zietman.

In 1992, Medicare significantly changed the way it pays for physicians’ services. Instead of basing payments on charges, the federal government established a standardized physician payment schedule based on a resource-based relative value scale; payments for services are determined by the resource costs needed to provide them. To ensure that physician services across all specialties are well represented, the American Medical Association (AMA) established the AMA/Specialty Society Relative Value Scale Update Committee.

Dr. Zietman explained that the committee makes annual recommendations regarding new and revised physician services to the Centers for Medicare & Medicaid Services (CMS) and performs broad reviews of the relative value scale every 5 years. “However, as far as IMRT, the valuation code in 1999 was particularly generous, especially since at that time we really did not have data to prove its clinical value—certainly not whether it was cost-effective,” said Dr. Zietman.

On a broader scale, Dr. Zietman stressed that our current payment system is a larger part of the problem. “In the United States we currently have what I call ‘code-driven’ clinical practice. In other words, the practice follows the most lucrative reimbursement codes. It’s simply human nature. So our coding structure is certainly one area in which we could save money and, in some instances, deliver more appropriate care. ”

Dr. Zietman pointed out that a shift in government policy—empowering CMS to use cost-effectiveness metrics—could substantially reduce rising health-care costs. “The British have the National Institute of Clinical Effectiveness (NICE), which rigorously evaluates cost-effectiveness of new drugs and technologies. In the United States, we have our own quasi ‘national health service,’ CMS, and if the agency would flex its very large muscles and begin reexamining its reimbursement policies, all the insurance companies would follow suit,” said Dr. Zietman.

Dr. Zietman offered NICE’s methodology as a model of how cost-effectiveness research works in the real world. “After NICE does a rigorous independent evaluation of a drug or technology, the agency says, ‘This is valuable, but it only has X amount of value. So we’ll pay a certain amount but you go out and negotiate with the drugs or technology companies for a better price to make up the difference.’ With NICE, it is not an all-or-nothing reimbursement schema.”

Dr. Zietman used sorafenib (Nexavar) in kidney cancer as an example. “NICE evaluated sorafenib as it was indicated for kidney cancer and determined that it indeed had value, but not $80,000 per year’s worth. The agency said that it would reimburse one-third of the total cost, and if the drug company wants to market their product to 60 million British citizens, they will need to be price flexible,” said Dr. Zietman.

Dr. Zietman stressed that although in the United States we have been loath to bring costs of cancer care into the clinical discussion, we have reached a critical time that behooves providers and policymakers to make solid changes in our system. “It will entail a sea change, but we need to institute better evidence review and evidence-based payments,” concluded Dr. Zietman. ■