Controlling for imbalances at baseline yielded a 38% reduction in risk of progression.

A re-analysis of the RADIANT-2 trial, which evaluated everolimus (Afinitor) in patients with advanced nonpancreatic neuroendocrine tumors, has yielded prognostic factors that identify a group of patients who are not only at high risk for recurrence but who may derive benefit from treatment with everolimus plus octreotide.1 The results were presented at the 2012 Gastrointestinal Cancers Symposium by James C. Yao, MD, of The University of Texas MD Anderson Cancer Center, Houston.

Everolimus is approved for the treatment of advanced pancreatic neuroendocrine tumors based on a 65% reduction in the risk of progression or death (P < .001),2,3 but is not indicated for neuroendocrine tumors originating outside of the pancreas—ie, carcinoid—where its benefit has been less certain.

There were randomization imbalances in the study, largely because appropriate prognostic factors needed to stratify patients had not been well defined at the start of the study, Dr. Yao explained.

These included performance status, primary tumor site, and percentage of patients with biomarkers deemed important in neuroendocrine tumors, which are chromogranin A (CgA) and 5-hydroxyindoleacetic acid (5-HIAA). 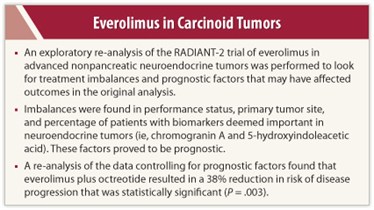 In the current study, Dr. Yao and colleagues reexamined the original phase III results to both identify prognostic factors and adjust for randomization imbalances.

“We performed this analysis to identify prognostic factors that showed which patients with neuroendocrine tumors are at risk for disease progression and to adjust for these imbalances,” Dr. Yao said.

Patients with bone metastases had a 1.52 times greater risk for progression than those without bone metastases, while those with lung as the primary site had a 1.55 times greater risk, compared with other sites of origin. Elevated CgA at baseline was another factor for poor prognosis, with a 53% lower risk observed in patients with normal CgA levels. Performance status of 0 was associated with a 31% reduced risk, and treatment with everolimus carried a 38% reduced risk. All these factors were statistically significant in the multivariate analysis.

In an exploratory analysis that adjusted for these prognostic factors, a persistent significant benefit for everolimus and octreotide therapy was observed, compared with placebo and octreotide, with a hazard ratio of 0.62 (P = .003), Dr. Yao reported.

“When we adjusted for the potential prognostic factors, the treatment effect led to a 38% reduction in the risk of progression with everolimus,” he said, noting the marked improvement over the 23% risk reduction seen in the first analysis.

In other words, he emphasized, the original study data may have underestimated the benefit of everolimus, which is likely “a little more active than previously thought,” said Dr. Yao at a press briefing.

Chromogranin A has been shown to be prognostic for both progression-free and overall survival, but this was the first evaluation of CgA as a biomarker in a randomized placebo-controlled study.

“We found a significant imbalance in the baseline distribution of CgA. The mean and median CgA levels were significantly higher in the group receiving everolimus, suggesting this is a worse prognosis group,” Dr. Yao reported.

“The hazard ratio for CgA was 0.47, suggesting this is a very significant predictor of the risk of progression,” Dr. Yao noted.

In the placebo arm, median progression-free survival was approximately 20 months for patients with low CgA levels but 8 months for those with elevated CgA. In the everolimus arm, median progression-free survival was 31 and 14 months, respectively. The study, therefore, identified a group of patients likely to rapidly progress and who most warrant treatment, he said.

“The data should be interpreted as exploratory,” Dr. Yao acknowledged. “Whether the magnitude of the treatment effect is greater than we initially estimated needs to be confirmed.”

The phase III RADIANT-4 trial will seek to obtain that confirmation in advanced nonfunctional neuroendocrine tumors of gastrointestinal or lung origin. ■

Disclosure: Dr. Yao has received consulting or advisory fees from Endo Pharmaceuticals, Ipsen, Novartis, and Pfizer and research funding from Genentech and Novartis.

Expert Point of View: Re-analysis of RADIANT-2 Finds Benefit for Everolimus in Patients with Carcinoid Tumors

Timothy J. Hobday, MD, of the Mayo Clinic in Rochester, Minnesota, discussed the findings of the RADIANT-2 re-analysis at the 2012 Gastrointestinal Cancers Symposium.

Speaking from the perspective of a clinical researcher, he said, “the conclusions of the study are reasonable” and provide...