At least in the research arena, genotypes are beginning to guide treatment.

The startling molecular heterogeneity of metastatic triple-negative breast cancer is now obvious and helps to explain the poor outcomes observed in this patient subset. Comprehensive genomic and transcriptomic interrogation of metastatic triple-negative breast cancer is elucidating the molecular biology of these tumors and resulting in treatment that takes “personalized medicine” to the next level.

Work performed at the Translational Genomics Research Institute, Phoenix, in collaboration with US Oncology/Texas Oncology and Life Technologies, Carlsbad, California, was described at the 2011 San Antonio Breast Cancer Symposium by Joyce O’Shaughnessy, MD, of the Baylor Sammons Cancer Center, Dallas.1

“Our team of genome scientists and clinical oncologists is evaluating the sequencing findings and prioritizing investigational therapeutic options for each patient,” Dr. O’Shaughnessy said.

The investigators are sequencing germline and tumor DNA to a depth that is sufficient for identifying somatic genomic alterations, including point mutations, indels, and structural events such as translocations. Furthermore, RNA sequencing is performed on the tumors, along with tissue from age- and ethnicity-matched normal breast controls, to obtain deep differential expression analysis, isoform expression analysis, and fusion transcript detection.

The study has revealed numerous known and novel mutations in metastatic triple-negative breast cancer. All patients’ cancers analyzed to date have alterations that would activate the MAPK and PI3K/AKT pathways, but through various mechanisms in different patients. This finding supports the concept that combination targeted therapy will be most effective in the treatment of this cancer, Dr. O’Shaughnessy said.

“Every tumor is genomically unique,” she emphasized. “Some of the cancers have numerous translocations and a high degree of genomic instability. Others have simpler genomes.”

An analysis of known cancer genes revealed p53 mutations in the majority of the patients. Other abnormalities were inactivating deletions in RB1, PTEN, CTNNA1, ERBB4, and NF1. Focal high-level amplifications were observed in BRAF, WT1, WHSC1L1, FGFR1, KRAS, ARAF, and MYB.

At the San Antonio meeting, Dr. O’Shaughnessy described how the unique genetic profiles of 12 patients with metastatic triple-negative breast cancer might explain their disease recurrence, and how the clinicians used the information to guide treatment for metastatic disease (see sidebar, Genotype and Treatment Outcomes).

Putting It All Together 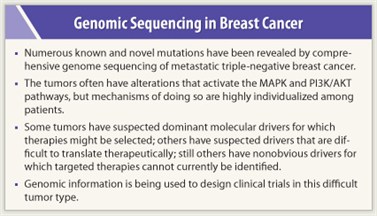 “Whole genome and transcriptome sequencing of 12 patients with metastatic triple-negative breast cancer corroborated the heterogeneous biology of this cancer and identified a subset that may be driven by dominant mutations,” she summarized. “RAS/RAF/MEK and PI3K/AKT/mTOR pathway mutations and their possible coactivation occur by multiple mechanisms and are common in metastatic triple-negative breast cancer.”

Based on the frequency of this genomic context, patients are being offered treatment with combined MEK (trametinib) plus AKT (GSK2110183) inhibitors on a phase I study,

“Some metastatic triple-negative breast cancers have suspected dominant molecular drivers for which therapies might be selected,” she said. These include PTEN/NF1 deletions; BRAF, KRAS, and ARAF amplification; and FBXW7/FGFR1 alterations.

“Other metastatic triple-negative breast cancers have suspected drivers that are difficult to translate therapeutically,” she continued. These include WT1 and WHSC1L1 amplifications. “Still others have nonobvious drivers for which targeted therapies cannot currently be identified,” she said, though efforts are now underway to distinguish driver mutations within this dataset.

“We are beginning to use these insights to prioritize therapeutic targeting,” she said. They have observed, for example, that one chemotherapy-refractory patient, with a high level BRAF amplification/overexpression along with downregulation of PTEN and INPP4B, had a major response to combined MEK plus AKT inhibitors on a phase I study at the START phase I program in San Antonio. Other sequenced patients are also being offered treatment on a phase I study of MEK plus AKT inhibitors. ■

Disclosure: Dr. O’Shaughnessy has served as a consultant for sanifi-aventis.

At the 2011 San Antonio Breast Cancer Symposium, Joyce O’Shaughnessy, MD, described how the genetic profiles of 12 patients with metastatic triple-negative breast were used to guide treatment for metastatic disease

Patient #10 was a 59-year-old African-American woman with primary...

Hope Rugo, MD, of the University of California, San Francisco, commented on Dr. O’Shaughnessy’s presentation on molecular pathways in triple-negative breast cancer at the 2011 San Antonio Breast Cancer Symposium. “The really exciting thing is that we have moved from intrinsic subtyping of breast...

Oncologists on the Front Lines of the COVID-19 Pandemic: A Conversation With Miriam A. Knoll, MD

Francis P. Worden, MD, on the Role of Induction Chemotherapy in Laryngeal Preservation