The benefit of maintenance therapy in newly diagnosed multiple myeloma patients ineligible for stem cell transplant, such as the elderly, is still debated, though value appears to be emerging, according to studies presented at the 2011 American Society of Hematology (ASH) Annual Meeting.

Italian investigators evaluated lenalidomide in 459 elderly, transplant-ineligible patients, with a median age of 71 years. The final results of the phase III MM-015 trial were presented by Antonio Palumbo, MD, of the University of Turin, Italy.1

“What is really changing in the treatment paradigm is the concept of continuing treatment, moving from a fixed treatment to one incorporating continuous therapy,” Dr. Palumbo said. “Continuous treatment adds about 10 months of remission duration in elderly patients, and while no survival advantage has been shown, 3-year overall survival projected at 70% is certainly a good outcome.”

MM-015 tested three treatment regimens. Two groups received induction therapy consisting of melphalan, prednisone, and lenalidomide (MPR). Half this group (n = 152) was placed on maintenance therapy with lenalidomide (MPR-R) given on days 1 to 21 every 28 days until progression, while the other half (n = 153) received no continuous therapy (MPR). A third group (n = 154) received only melphalan and prednisone as induction therapy and no maintenance (MP).

The three-drug combination led to significantly more responses, “so MPR is better than MP when toxicity is not a problem…. But maintenance therapy provides the major difference,” Dr. Palumbo said.

“The advantage of maintenance was present in all patients, independent of age, grade, prognosis and so forth,” he noted.

At 41 months median follow-up, however, no impact had been seen on overall survival. At 4 years, overall survival rates were 59% for MPR-R, 58% for MPR, and 58% for MP. These rates are significantly better than the typical 3-year average survival time, he noted, pointing out that a trend toward a survival benefit was observed in the 65- to 75-year-old age group.

But Dr. Palumbo argued that this slight risk (about 5%) was far outweighed by lenalidomide’s benefit in delaying progression (about 75%), an opinion seconded by many specialists at the meeting. 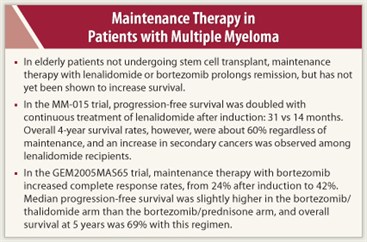 Bortezomib-based maintenance regimens may also optimize myeloma treatment in this group of patients, according to Maria-Victoria Mateos, MD, of the University Hospital of Salamanca, Spain.

Maintenance therapy was bortezomib at 1.3 mg/m2 administered on days 1, 4, 8, and 11 every 3 months plus thalidomide at 50 mg/d (VT) or prednisone at 50 mg (VP) every 2 days up to 3 years. The study did not evaluate outcomes in patients who did not receive maintenance.

Response rates were about 80% with either regimen. The current study determined whether maintenance therapy would upgrade these responses and confer a benefit in terms of progression-free and overall survival.

“Toxicity was very low with maintenance,” Dr. Mateos noted. VT was associated with more peripheral neuropathy (9% vs 3%), but in all but one patient this was worsening—not emergent—neuropathy.

At 46 months follow-up, median progression-free survival was slightly higher with VT maintenance—39 vs 32 months with VP—and this was not influenced by the induction regimen. Overall survival has not been reached with VT maintenance, with 69% of patients alive at 5 years and 60% alive after treatment with VP.

But for patients with high-risk cytogenetics (20% of the population), neither maintenance regimen could overcome the poor prognosis. Median progression-free survival was 26 months and median overall survival was 50 months, with no differences seen between the regimens. ■

Expert Point of View: Maintenance with Lenalidomide or Bortezomib in Multiple Myeloma

David S. Siegel, MD, PhD, of the John Theurer Cancer Center at Hackensack University Medical Center in New Jersey, commented to The ASCO Post that essentially all patients with multiple myeloma could be candidates for maintenance therapy. “But I don’t know that we have established that maintenance...

Oncologists on the Front Lines of the COVID-19 Pandemic: A Conversation With Miriam A. Knoll, MD

Francis P. Worden, MD, on the Role of Induction Chemotherapy in Laryngeal Preservation