Keratoacanthomas and cutaneous squamous cell carcinomas are frequently observed in patients receiving the RAF inhibitor vemurafenib (Zelboraf) for treatment of BRAF-mutated melanoma. As discussed by Lacouture and colleagues in a recent Journal of Clinical Oncology article, these effects appear to result from accelerated growth of lesions with HRAS mutations, and this accelerated growth appears to be inhibited by cotreatment with mitogen-activated protein kinase/extracellular signal-regulated kinase (MAPK/ERK, or MEK) inhibitors.1 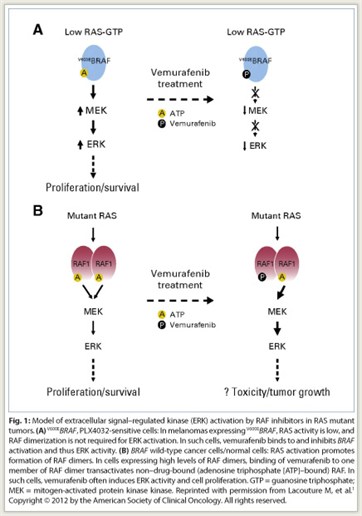 Vemurafenib is approved for the treatment of patients with unresectable or metastatic melanoma with the BRAF V600E mutation as detected by an FDA-approved test. Highly selective RAF inhibitors, such as vemurafenib and sorafenib (Nexavar), inhibit RAF activation of ERK only in tumors expressing mutant BRAF; paradoxically, these inhibitors activate this pathway in tumors with wild-type BRAF and in normal cells (Fig. 1). This signaling appears to account for the skin toxicity and cutaneous squamous cell carcinomas associated with vemurafenib treatment.

Approximately one-third of patients treated with vemurafenib develop a keratosis pilaris-like rash, and up to one-third develop keratoacanthomas or cutaneous squamous cell carcinomas. These adverse effects are not a major deterrent to use of vemurafenib in advanced melanoma; the keratoacanthomas and cutaneous squamous cell carcinomas are of low metastatic potential and are easily treated by such methods as surgical resection and cryotherapy. However, there is concern over the use of vemurafenib or other RAF inhibitors in earlier disease, as it remains unknown whether these agents might promote growth of tumors at other sites.

Su and colleagues reported in The New England Journal of Medicine that 60% of 35 lesions from patients receiving vemurafenib harbored HRAS mutations, with the most prevalent being HRAS Q61L.3 Increased proliferation of HRAS Q61L–mutant cell lines exposed to vemurafenib was associated with MAPK-pathway signaling and activation of ERK-mediated transcription. These investigators then showed that a vemurafenib analog accelerated growth of lesions with HRAS mutations in a mouse model of HRAS Q61L–mediated skin carcinogenesis, but did not initiate or promote carcinogenesis. The growth promoted by the vemurafenib analog was blocked by concomitant treatment with a MEK inhibitor.

Thus, the emerging picture of vemurafenib-associated cutaneous squamous cell carcinoma is that induction of RAF signaling by the agent promotes the hyperproliferation of preexistent dormant RAS-mutant cancer cells—hence the concern that use of selective RAF inhibitors in patients with early cancer could be associated with risk of promoting growth of such dormant tumors in other sites.

“The development of nonmelanoma skin cancers secondary to RAF inhibitor treatment has been recognized since 2005, having been seen initially with sorafenib (Nexavar),” noted Mario E. Lacouture, MD, of Memorial Sloan-Kettering Cancer Center. Commenting on recently published studies in this setting,...