Adolescents and Young Adults with Cancer: A Distinct Population of Patients Who Need to Be Treated Differently

Cancer among adolescents and young adults has been in the news lately for a number of reasons. These include reports on the CBS Evening News and elsewhere that survival rates have not improved for cancer patients in the 15 to 39 age group and several segments on the PBS NewsHour on cancer in teens.

The PBS blog, The Rundown,1 noted that as former Chair of the Children’s Cancer Group, Archie Bleyer, MD, was “one of the first to sound the alarm that teens were being ‘left behind’ in the research and medical oncology community at a critical time in their lives.” In an interview with The ASCO Post, Dr. Bleyer explained that in 1970s, when the War on Cancer was declared in the United States, survival was poorer among older patients and in children. “So we concentrated on their cancers, and there’s been tremendous progress. But as we concentrated on the youngest of our patients and older adults, we left behind the adolescents and the young adults,” Dr. Bleyer said.

“It’s starting to turn around, but it’s still got a long way to go,” he added. Dr. Bleyer is currently Clinical Research Professor at Oregon Health and Science University (OHSU) in Portland and a consultant and Chair of the Institutional Review Board at St. Charles Health System in Bend, Oregon.

“A major turning point in the idea of focusing on these patients under 40,” according to Brandon Hayes-Lattin, MD, was the Report of the Adolescent and Young Adult Oncology Progress Review Group, published by the NCI in 2006.2  That report identified several factors limiting progress against cancer in adolescents and young adults (AYA), including restricted access to care, delayed diagnosis, and inconsistency in treatment and follow-up care.

Last year, ASCO launched its Focus Under Forty™ program to address disparities in survival rates and focus on specific challenges of diagnosing and treating adolescents and young adults with cancer. Dr. Hayes-Lattin is a member of the task force that planned the curriculum for Focus Under Forty and Senior Medical Advisor for LIVESTRONG, which helped develop the program. A bone marrow transplant physician, Dr. Hayes is also Medical Director of the Adolescent and Young Adults Oncology Program and Associate Professor, Division of Hematology and Oncology, at the OHSU Knight Cancer Institute.

“What we have seen in the past year are major strides in awareness of the unique cancers and the unique issues that young adults face. The opportunity that is before us now is how to organize and institutionalize that interest and that awareness,” Dr. Hayes-Lattin said. The Teenage Cancer Trust Units in the United Kingdom have given a home for where to act on these issues,” he added. “In the United States, we have made great progress in awareness and now we would really like to step it up and make progress in creating a home for this [adolescent and young adult] work to happen.”

The Teenage Cancer Trust operates teen cancer centers in the United Kingdom that have benefited from the promotion and fundraising efforts of Roger Daltrey and Pete Townsend of the rock group, The Who. These efforts were highlighted by the PBS NewsHour, which noted that the Daltrey/Townsend Teen and Young Adult Cancer Program is expanding to the United States, with the first site scheduled to open in California as part of the UCLA Health Systems.

“There is great interest in creating these unique young adult spaces,” Dr. Hayes-Lattin said. “We have space within our inpatient cancer ward that is an AYA room,” and includes a Wii gaming device and treadmill. OHSU also has a consult service that reaches out to identify AYA patients with cancer being treated in the pediatric or adult facilities there, and then offers them medical consults and resources specific to adolescents and young adults.

“Increasingly, although still sparingly, centers are developing their own adolescent and young adult programs,” Dr. Bleyer said. “There are still too few of them, but there are areas of the country that are well served.” 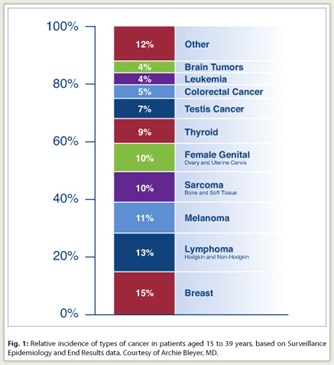 Adolescents and young adults have a different set of cancers, not necessarily those that have benefited most from research advances (see Fig.1). Dr. Bleyer identified the types of cancers mostly likely to affect AYAs as breast, lymphoma, melanoma, sarcoma, thyroid cancer, and gonadal cancer (testicular for males and cervical carcinoma and ovarian stromal cell tumors for females).

Specific types of cancers may present differently in adolescents and young adults than they do in younger or older patients. “The best example in terms of cancer in an older person that affects a young person differently might be breast cancer,” Dr. Hayes-Lattin said. “A young woman with breast cancer is more likely than an older woman to have a breast cancer that does not have hormone receptors, that is estrogen receptor– and progesterone receptor–negative. And that has direct implications. It means that hormonal therapy really doesn’t have a role in treatment and maintenance for those women.”

Because the cancers are different, the signs and symptoms can be different and overlooked by physicians, who may have a low index of suspicion for cancer in the adolescent and young adult population, or by the young people themselves, who may see themselves as invulnerable to serious disease. Adolescents and young adults may, however, be more vulnerable to peer pressure, Dr. Bleyer noted. “There may be a symptom or a sign of a medical problem that should be addressed, but peer pressure favors an attitude suggesting, ‘Don’t be a wimp. Get over it.’ So they don’t bring their problem for medical attention.” In addition, adolescents may be embarrassed to talk about symptoms that involve sexual organs.

Being uninsured “also leads to delayed diagnosis,” Dr. Bleyer noted. “With the Affordable Care Act, 2.5 million more young adults are now on insurance, but we’ve still got a long way to go.”

“To not be involved with the psychosocial needs of older adolescents and young adults, which are so distinctly different, would make any other efforts almost impossible to achieve,” Dr. Bleyer said. “There is such a need to understand the social, sexual, and personality needs of young adults, that without being really attentive to that, we are not going to make much more progress.”

OHSU runs a support group for young adults aged 15 to 39. “That support group is run by our hospital, but we also partner with both local and national organizations that provide support and social interaction,” Dr. Hayes-Lattin explained. These include groups that host social events, kayaking, hiking, and other types of trips. “So we try to come up with a menu of young adult relevant supports—some of them are official social work–facilitated support groups, and some are more young adult social interaction programs.”

“An increasing number of support venues have been available on the Internet,” Dr. Bleyer said. “And for this age group, that is more helpful than any others.” Groups hosting such websites include the Young Survival Coalition for young women with breast cancer (www.youngsurvival.org), Planet Cancer (www.planetcancer.org), and LIVESTRONG (www.livestrong.org).

“The age group that participates least in clinical trials is between 15 and 40 years old. Less than 2% of those patients are on clinical trials at any time during their cancer experience. That, of course, means more than 98% are never on a clinical trial,” Dr. Bleyer said.

“The main problem right now is lack of clinical trials” for the cancers affecting the adolescent and young adult population, he explained. “For the trials we do have, there is still a lower rate of participation than is seen in other age groups. Some of that is because of insurance issues, with patients unable to afford the care at a comprehensive cancer center. Some of it is because of a lack of ability to travel, stay in hotels, or get off from work or school.” Added to that are psychosocial issues related to feeling so different already and “then having to go somewhere else and be almost isolated from their peers.”

Oncologists may need to think outside standard age ranges when it comes to referring adolescent and young adult patients to clinical trials, Dr. Hayes-Lattin advised. Pediatric trials may accept patients up to age 30 or 35. In some cases, adult clinical trials have age cutoffs at 18 years old just because the consent processes are different for under and over 18, Dr. Hayes-Lattin said. “It is a barrier that has existed that hasn’t been challenged enough. Pediatric oncologists consent to younger patients on trials safely and effectively all the time.”

This low participation rate in clinical trials has consequences. “First of all, almost everything we’ve learned about treating cancer has come from clinical research and clinical trials,” Dr. Bleyer said. Lack of clinical research among the adolescent and young adult population means “we are not going to be able to learn what we need to do to help them,” he continued.

“Second, with clinical trials come the biological specimens to study the problem in the laboratory and to learn more about the basic biology and what might work for therapy,” he added. “So we’ve got the combination of lack of specimens, lack of clinical trials, and thereby less progress.” ■

Disclosure: Dr. Bleyer is a consultant and speaker for Sigma-Tau Pharmaceuticals. Dr. Hayes-Lattin reported no potential conflicts of interest.

SIDEBAR: Expect and Ask Questions about Sex and Fertility Preservation

SIDEBAR: Should ‘AYA’ Be an Oncology Subspecialty?

SIDEBAR: Expect and Ask Questions about Sex and Fertility Preservation

What most concerns the adolescent and young adult population? “If they are worried about anything, it is sex and having families,” according to Archie Bleyer, MD. Years ago, he said, “oncologists were so worried about just getting them in remission, treating their cancers, and getting them to...

SIDEBAR: Should 'AYA' Be an Oncology Subspecialty?

The lag in improvement in survival rates for adolescents and young adults (AYAs) with cancer and a greater awareness of the unique issues they face has prompted discussion about whether “AYA” should become a new oncology subspecialty.1