The ASCO Post’s Integrative Oncology series is intended to facilitate the availability of evidence-based information on integrative and complementary therapies sometimes used by patients with cancer. In this installment, Yen Nien Hou, PharmD, DipIOM, LAc, and Jyothirmai Gubili, MS, focus on kratom—an herbal extract from a Southeast Asian tropical tree in the coffee family with a high potential for abuse—because of its increasing popularity as a pain reliever.

A tropical tree prevalent in Southeast Asia, kratom has a long history of medicinal use. Its leaves are chewed, smoked, or used to make tea for stimulant effects. They are also used for wound healing, to relieve diarrhea, to reduce pain and fever, and as a substitute for opium. Kratom has recently gained popularity in the United States as a pain reliever, a mood enhancer, and as an alternative for treating opioid withdrawal. However, its use has been associated with severe adverse effects, along with a high potential for abuse. Kratom is banned in several states in the United States and in some countries.

Clinical data on kratom are limited. Kratom was reported to exert stimulant effects at low doses (1–5 g), whereas pain-relieving and sedative properties were observed at higher doses (5–15 g).7 These effects occur within 5 to 10 minutes after ingestion and may persist for 2 to 5 hours.8 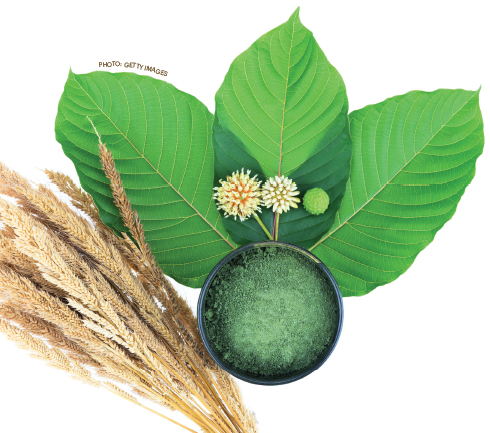 Pharmacologic studies found the alkaloids mitragynine and 7-hydroxymitragynine to be the chief bioactive compounds.9 Both produce central nervous system stimulant and depressant effects via monoaminergic and opioid receptors.10,11 They also mimic opioids, as evidenced by their affinity for opioid receptors, competitive interaction with naloxone (a medication used to reverse opioid overdose), as well as analgesic cross-tolerance.12 In addition, mitragynine can cause addiction profiles similar to those of morphine and cognitive impairment.13

Liver injury has been reported following prolonged use of kratom.17-19

Cardiotoxicity was observed as a result of ingesting kratom.20-22

Several deaths have been associated with the use of kratom-containing products or polydrug use in which kratom was believed to play a role.23-31

Cytochrome P450 (CYP450) Substrates: There is a potential for increased clearance of drugs metabolized by CYP450 substrates in kratom users.32,33 Kratom may also inhibit CYP2D634 and induce CYP1A2.35

UGT (uridine 5’-diphospho-glucuronosyltransferase) Substrates: There is also potential for increased clearance of drugs metabolized by UGT1A6 with kratom use.32

Kratom is a controversial agent whose physiologic effects have yet to be fully characterized. It was placed on the “drugs of concern” list by the Drug Enforcement Administration37 and labeled as an “emerging drug of abuse” by the National Institute of Drug Abuse.38 Also, the FDA issued a public health advisory against its use, citing the potential for abuse.23 Despite these warnings, kratom continues to be widely marketed on the Internet.

It is critical for health-care providers to be familiar with kratom. Suggested strategies for managing patients who abuse kratom include prevention of organ damage, alleviation of acute kratom withdrawal symptoms, and long-term maintenance of sobriety.39

1. U.S. Food and Drug Administration: The Golden Road Kratom. May 15, 2020. Available at https://www.fda.gov/inspections-compliance-enforcement-and-criminal-investigations/warning-letters/golden-road-kratom-607627-05152020. Accessed on February 9, 2021.

23. U.S. Food and Drug Administration: Statement from FDA Commissioner Scott Gottlieb, MD, on the agency’s scientific evidence on the presence of opioid compounds in kratom, underscoring its potential for abuse. February 6, 2018. Available at https://www.fda.gov/news-events/press-announcements/statement-fda-commissioner-scott-gottlieb-md-agencys-scientific-evidence-presence-opioid-compounds. Accessed February 9, 2021.