An Increase for the National Institutes of Health Budget

The annual plan and budget proposal document allows us to open a dialogue—with cancer researchers, advocates, patients, and legislators—about the investments we believe could best enable the NCI to take full advantage of every scientific opportunity.

The National Institutes of Health (NIH) received a nearly $2 billion funding increase—the first large increase for the agency in more than 12 years—in the federal omnibus spending bill Congress passed on December 18, 2015. And President Barack Obama signed the bill into law a day later.

The 6.6% increase brings the National Institutes of Health budget to $32 billion. The bill includes a $264.3 million—or 5.34%—increase for the National Cancer Institute (NCI), raising the institute’s budget from $4.953 billion to $5.215 billion.

Congress doubled the NIH budget between 1998 and 2003, but funding has not kept up with inflation, and the agency has lost 22% of its purchasing power since 2003. The new funding, when adjusted for inflation, still does not bring the NIH back up to its 2003 peak.

Acting Director of the NCI Douglas R. Lowy, MD, discussed the oncology portion of the Precision Medicine Initiative at the 2015 Annual Meeting of the Association of American Cancer Institutes/Cancer Center Administrators Forum (AACI/CCAF). As part of the initiative, the NCI will develop and expand clinical trials in precision oncology. The NCI began one such study, the Molecular Analysis for Therapy Choice (MATCH) trial, on June 1. The trial opened at 600 sites and enrolled more than 150 patients for screening in the first month, Dr. Lowy stated.

Despite the increase, the NCI’s budget falls $238 million short of the $5.453 billion the institute requested earlier this year in its professional judgment budget proposal for fiscal year 2017.

“The annual plan and budget proposal document allows us to open a dialogue—with cancer researchers, advocates, patients, and legislators—about the investments we believe could best enable the NCI to take full advantage of every scientific opportunity,” Dr. Lowy said at the 2015 AACI/CCAF Annual Meeting. “We are working to make this document more than just a piece of paper or a page on a website. We hope that this serves as a conversation starter and provides a foundation for what is needed to continue to make progress against cancer.” 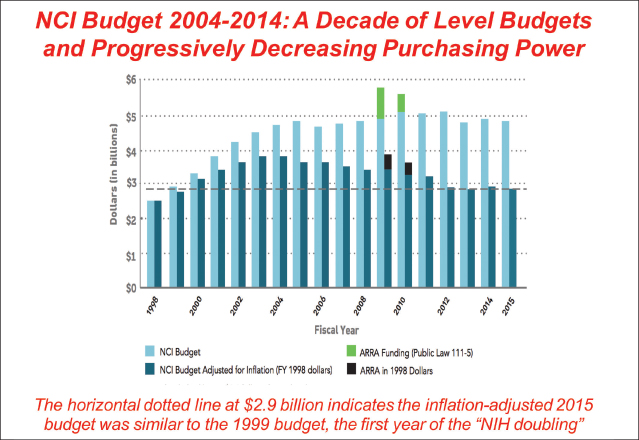 In its budget proposal, the NCI seeks a 7% increase each year, leading to a doubling of the NCI budget by fiscal year 2026. “This request was developed in response to the critical needs of the cancer research community and in recognition of the difficult financial climate we find ourselves in,” Dr. Lowy said. “This is what is required to modestly take advantage of the opportunities before us. The cancer research community could use a great deal more than 7%, and increases greater than that will speed the reparations of the years of declining budgets…. Sustained increases are critical to the research community, especially the younger investigators. We need to signal to them that a career in cancer research is possible and commit that funding will be there.”

The NCI’s Annual Plan and Budget Proposal for Fiscal Year 2017 is posted at http://www.cancer.gov/about-nci/budget/plan.

The NCI plans to implement a new funding formula for the Cancer Center Core Grants, which support the NCI-designated cancer centers. The plan will provide about $40 million in new funding to cancer centers, which have had their core grants for a shorter amount of time. The goal is to correct an inequity in the program, which rewards centers that have been core grant recipients the longest.

NCI officials discussed the plan in a December 1, 2015, meeting of the National Cancer Advisory Board and the NCI Board of Scientific Advisors. Under the plan, to be phased in over 3 years, core grants for basic science centers will increase to $1.1 million, clinical centers will receive a minimum of $1.4 million, and grants to comprehensive cancer centers would get a minimum of $1.5 million. This “rebalancing,” as officials called it, would be dependent on new funding in the following fiscal years, Dr. Lowy said at the meeting. The NCI Board of Scientific Advisors voted to approve the plan but asked the institute to provide another report to the board at its meeting scheduled for March 28–30, 2016. ■