Treating Head and Neck Cancer in 2015

A Conversation With Robert I. Haddad, MD 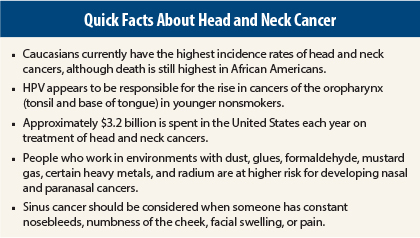 Head and neck cancer has suffered from a lack of novel approaches…. We’re very optimistic going forward that we will be able to better define and understand the genomics of the disease, which will help us tailor drugs for specific genetic alterations. This will allow head and neck cancer to step into the future of precision medicine.

Each year in the United States, about 55,000 people will be diagnosed with head and neck cancer, and of them, about 12,000 will die of the disease. Although advances have been made in the treatment of head and neck cancer, this disease remains persistently problematic, due, in part, to the complex anatomy of the sites involved. To bring readers up to speed on the latest developments in head and neck cancer, The ASCO Post spoke with a leading researcher in the field, Robert I. Haddad, MD, Associate Professor of Medicine at Harvard Medical School and Disease Center Leader in Head and Neck Oncology at Dana-Farber Cancer Institute, Boston.

Please tell the readers a bit about your background prior to joining Dana-Farber Cancer Institute.

I was born and reared in Lebanon, and I received my medical education at the French faculty of Medicine in Beirut University of Beirut. In 1995, I moved to the United States and did my internal medical residency at St. Luke’s–Roosevelt Hospital in New York. After that, I did my fellowship training in hematology-oncology at the University of Maryland in Baltimore.

I joined the staff of Dana-Farber Cancer Institute in 2001 and have been here ever since. I am currently the leader of the institute’s head and neck oncology program.

Over the course of your career, what are the biggest advances you’ve seen in head and neck cancer?

The treatment options in head and neck cancer have not changed significantly over the past decade. Surgery, radiation, and chemotherapy remain the main treatment modalities. I believe the major advances in this disease have been the development of newer technologies, such as how we deliver radiation therapy, whether by intensity-modulated radiation therapy (IMRT) or proton-beam therapy.

There have also been significant advances in the surgical treatment of head and neck cancer and in reconstructive methods. We now have the ability to perform major resections and simultaneously do reconstruction work, allowing our patients to maintain speech and swallowing functions along with other improvements in quality-of-life issues that were previously compromised by the routine use of more invasive surgery.

Are there any data suggesting a difference in benefit between IMRT and proton-beam therapy?

This is an important area that is being looked at in active research. However, for the vast majority of head and neck cancer patients, IMRT should still be standard of care.

Obviously, proton-beam therapy is preferred when you’re treating a tumor close to the ocular orbit or to the brain. But most head and neck cancers do not involve those two areas, and so the routine treatment of a patient with an oral cavity cancer generally entails surgery followed by IMRT. Moreover, IMRT produces a significant improvement in outcomes over traditional radiation therapy because of the ability to spare saliva and prevent dry mouth over the course of recovery.

Has the presentation of head and neck cancer by stage changed over the past decade?

Not appreciably. Most of our head and neck patients present with stage IVA locally advanced nonmetastatic cancer. The staging of head and neck cancer is very peculiar, and even though these patients have stage IVA, they are still highly curable, and usually with a good prognosis.

The treatment of head and neck cancer largely depends on the site we are treating. For patients with an anterior tumor of the oral cavity, standard of care is surgery first, with reconstruction, which is typically followed by IMRT or, in some cases, IMRT and chemotherapy. Most patients with posterior tumors of the voice box, the hypopharynx, the larynx, or the oropharynx are treated with chemotherapy and radiation.

Is there a role for robotic surgery in head and neck cancer?

Definitely. In fact, the availability of robotic surgery now allows the surgeon to remove the tumor in the oropharynx with minimal incisions and a shorter hospital stay. Moreover, robotic surgery in this field is the subject of numerous clinical trials to establish its value, not only in treating patients, but also in allowing a certain amount of de-intensification of radiation and chemotherapy after surgery.

Over the past decade, the identification of HPV as a major driver in head and neck cancer has initiated an important change in the epidemiology of this disease and in patient outcomes. We know that HPV-positive patients have a more favorable outcome than their HPV-negative counterparts. And the HPV-positive patients are currently the subjects of numerous clinical trials.

When we talk about HPV-related disease, we are basically referring to cancers of the oropharynx. We’ve learned over the past decade that in the United States and Western Europe, most cancers in this site are linked to the HPV-16 virus, which is a sexually transmitted virus. There are, of course, other modes of transmission of HPV. The vaccines against HPV we currently have were initially designed for young girls only, but recently, the indications have expanded to boys and girls prior to becoming sexually active. The optimal age for vaccination is between 11 and 13 years. But you have until age 26 in general to vaccinate people.

Despite the ability of the HPV vaccine to prevent cervical cancers, the vaccination rate in the United States is dismally low—about 30%. We need to do a better job at making primary care doctors and parents aware of the importance of having young people vaccinated against the HPV virus.

Also, because we know that HPV-positive patients have successful outcomes, it provides clinicians a better chance at using less-intensive treatments, which make for better quality-of-life outcomes. There are many studies looking at this HPV phenomenon—for instance, the Eastern Cooperative Oncology Group (ECOG) just published its initial observations that showed it could be possible to significantly de-intensify therapy in patients with HPV-positive head and neck cancer.

De-intensification of treatment is a major issue in the head and neck cancer community. By the same token, we are also wrestling with whether we should intensify treatment for patients who are HPV-negative, since we know that these patients do not have such a robust prognosis.

What current research activities are you involved in?

The majority of my time is spent on clinical and translational research, phase II and III trials. A current area of interest with my group has been the study of HPV-related oropharynx cancer. We have exciting initiatives looking at HPV vaccines—not in the preventive setting but as therapies. We are also very active in immunotherapy in head and neck cancer, especially with the promise of anti–PD-1 [programmed cell death protein 1] and anti–PD-L1 [PD-1 ligand] agents.

Historically, I think head and neck cancer has suffered from a lack of novel approaches, such as the ones I just mentioned. We’re also very optimistic going forward that we will be able to better define and understand the genomics of the disease, which will help us tailor drugs for specific genetic alterations. This will allow head and neck cancer to step into the future of precision medicine. ■