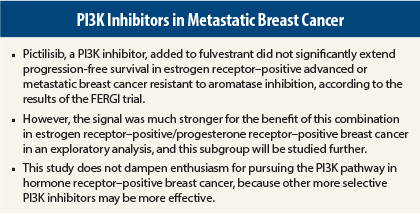 The [PI3K] pathway is clearly activated in breast cancer, [but] the modest 1- to 2-month advantage with pictilisib was not impressive.

Investigational alpha-selective PI3K inhibitors may turn out to be more effective than pictilisib in breast cancer.

Interest is high in studying the PI3K pathway in hormone receptor–positive breast cancer, but it is not clear which of the PI3K inhibitors under development—if any—will be a “home run.” The phase II FERGI study, reported at the 2014 San Antonio Breast Cancer Symposium, failed to meet its primary endpoint with the PI3K inhibitor pictilisib but did provide hints of activity and areas for further investigation of this drug.1

“When we considered only women with metastatic breast cancer positive for both the estrogen receptor and progesterone receptor, adding pictilisib resulted in a doubling of progression-free survival in an exploratory analysis. We plan to investigate whether the benefit of pictilisib for women with estrogen receptor–positive and progesterone receptor–positive breast cancer holds true in an additional cohort of patients within this study,” stated lead author Ian Krop, MD, PhD, Director of Clinical Research for the Breast Oncology Program at the Dana-Farber Cancer Institute in Boston.

“We saw enough activity in the combination arm to investigate this class of drugs further in the setting of metastatic breast cancer. Whether pictilisib is the right drug remains to be seen. There are ongoing studies of other more potent PI3K inhibitors that may ultimately have better results,” said study coauthor Eric Winer, MD, of Dana-Farber Cancer Institute.

PI3K mutations are present in 40% to 45% of cases of estrogen receptor–positive breast cancers, and PI3K/mTOR signaling is a suspected resistance mechanism to antiestrogen therapy. Pictilisib is an oral potent, pan-class I selective PI3K inhibitor, and there was interest in determining the effect of adding this agent to fulvestrant in patients resistant to aromatase inhibitor therapy.

The phase II FERGI trial included 168 postmenopausal women with advanced or metastatic breast cancer previously treated with an aromatase inhibitor as adjuvant or metastatic therapy. The women were randomly assigned 1:1 to receive treatment with fulvestrant plus pictilisib vs fulvestrant plus placebo and treated until disease progression, at which time patients receiving placebo could cross over to pictilisib.

Safety of the combination was consistent with single-agent phase I experience. No treatment-related deaths were reported. Adverse events of grade 3 or higher in the combination arm included diarrhea (7%), rash (17%), and fatigue (6%).

“These effects were not overly severe in the vast majority of patients. On the other hand, there were more dose adjustments and discontinuations due to adverse events with combination therapy,” Dr. Winer said.

A modest improvement in progression-free survival was observed in an intent-to-treat analysis of the entire study population: a median of 6.6 months for the combination vs 5.1 months for the placebo. However, in the subgroup of patients with both estrogen receptor–positive and progesterone receptor–positive disease, an unplanned subset analysis showed a median progression-free survival of 7.4 months vs 3.7 months.

“Although we had hoped the combination would be somewhat more active, the subgroup data are worth exploring further, and ongoing studies will look at this,” Dr. Winer said.

One surprise was that patients with PIK3CA mutations did not seem to have an increased benefit from combination therapy. However, testing for PIK3CA mutations should be done only in the context of a clinical trial, Dr. Winer stated.

“It is likely that the field is going toward more selective PI3K inhibitors, such as alpha-selective agents,” he noted.

Dr. Krop said that an additional 60 patients would be entered in this study.

“The pathway is clearly activated in breast cancer. The modest 1- to 2-month advantage with pictilisib was not impressive,” she said. “Also, this therapy has toxicity.” In addition, in this study, PI3K mutations were not a reliable biomarker.