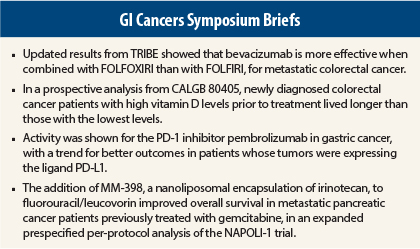 FOLFOXIRI plus bevacizumab represents a valuable option for the upfront treatment of metastatic colorectal cancer.

The 2015 Gastrointestinal Cancers Symposium, held January 15–17 in San Francisco, attracted almost 4,000 attendees, who heard or viewed data from nearly 800 scientific abstracts and lectures. Here are our summaries of some of the many important developments from the meeting.

FOLFOXIRI was associated with more grade 3/4 diarrhea, mucositis, neuropathy, and neutropenia but no increase in febrile neutropenia, serious adverse events, or treatment-related deaths. The intensity of FOLFOXIRI precludes its use in all patients, acknowledged Dr. Cremolini, who suggested that it is probably not suitable for those older than age 75 or younger patients with poor performance status.

Newly diagnosed colorectal cancer patients with high vitamin D levels prior to treatment lived longer than those with the lowest levels in a prospective analysis of data from a phase III study,2 adding to a growing body of evidence that vitamin D has an antitumor effect, said Kimmie Ng, MD, MPD, of Dana-Farber Cancer Institute and Harvard Medical School, Boston.

“The ultimate goal is to translate this research into an effective intervention for patients,” she said.

Dr. Ng and colleagues measured the plasma levels of vitamin D (25-hydroxyvitamin D) in 1,043 patients enrolling in the Cancer and Leukemia Group B (CALGB) 80405 trial, which evaluated three different first-line treatments for advanced colorectal cancer. Their vitamin D levels ranged from a median low of 8 ng/mL to a median high of 27.5 ng/mL. The median for all patients was 17.2 ng/mL, which is below the recommended healthy range of 20 to 30 ng/mL.

Divided into quintiles according to their baseline vitamin D level, and adjusted for other prognostic factors and healthy behaviors, patients with the highest levels had a median overall survival of 32.6 months, compared with 24.5 months for those in the lowest quintile (HR = 0.67, P = .002), and a longer time to disease progression, 12.2 months vs 10.1 months (HR = 0.80, P = .02). The benefit was seen across the three treatment arms, did not differ by KRAS status, and was not ameliorated after adjustment for other prognostic factors.

Dr. Ng acknowledged that the findings do not indicate that raising a low baseline vitamin D level will improve outcomes. Randomized studies are underway to evaluate the benefit of vitamin D supplementation before and after a cancer diagnosis.

KEYNOTE-012 evaluated the immune checkpoint inhibitor in a variety of solid tumors. The gastric cancer cohort included 39 patients whose tumors expressed PD-L1 (a requirement for eligibility), which comprised 40% of those screened. These patients mostly had received prior chemotherapy.

Patients received pembrolizumab at 10 mg/kg every 2 weeks for up to 24 months. The primary endpoint was objective response rate by independent central review. At 8.8 months’ follow-up, there was “strong evidence of anticancer activity,” Kei Muro, MD, of Aichi Cancer Center Hospital in Nagoya, Japan, reported.

Responses were observed in 22.2% by central review and in 33.3% by investigator review. These eight responses were all partial responses; stable disease was observed in another five patients (and in four patients, response was not determined). Approximately 53% of patients had some degree of tumor shrinkage.

“Six of the eight responders were still responding at the time of this analysis,” Dr. Muro noted. The median time to response was “rapid” at 8 weeks, and median response duration was 24 weeks (range, 8 to 33-plus). Median progression-free survival was 1.9 months. At 6 months, the progression-free survival rate was 24% and overall survival rate was 69%. Median overall survival has not been reached.

Patients with high PD-L1 expression (staining in the stroma or in ≥ 1% of tumor cells) showed a trend toward improved outcomes (ie, better response rates, progression-free survival, and overall survival). Dr. Muro acknowledged, however, the current trend was “weak” and requires further investigation.

The phase II KEYNOTE-059 study of pembrolizumab monotherapy or in combination with cisplatin plus 5-FU for advanced gastric cancer will be initiated early in 2015.

The addition of MM-398, a nanoliposomal encapsulation of irinotecan, to 5-FU/leucovorin was shown to improve overall survival in metastatic pancreatic cancer patients previously treated with gemcitabine, in an expanded prespecified per-protocol analysis of the NAPOLI-1 trial presented by Li-Tzong Chen, MD, of the National Institute of Cancer Research, National Health Research Institutes, Taiwan.4 Investigators had previously reported data from the intent-to-treat population, showing that MM-398 plus 5-FU/leucovorin significantly improved survival.5

MM-398, liposomal irinotecan injection, contains about 80,000 molecules of irinotecan stably encapsulated in a 100-nm liposome, circulates more extensively, and achieves higher levels of the active metabolite, SN-38, in the tumor, compared to conventional irinotecan. The drug has received Fast Track status from the U.S. Food and Drug Administration.

The safety profile of the combination regimen was considered manageable, with the most frequent adverse events being neutropenia, fatigue, diarrhea, and vomiting. ■