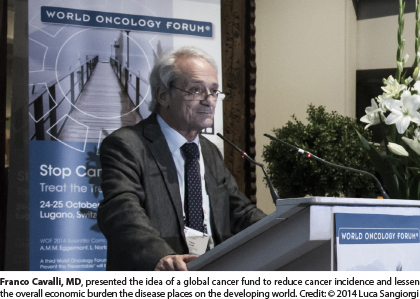 In order to launch a global cancer fund, similar to the one for AIDS, we need strong political pressure—and we are working on that. However, it will require concerted and bold action at national and international levels.

As a cancer community, we need to set the expectation bar higher, so we should no longer devote resources to developing cancer drugs that produce only small, incremental advances. Instead, those resources should be redirected into further discovery work in the laboratory.

Since 1990, the annual global death toll from cancer has risen about 40%, and that number is projected to increase from the current level of approximately 8 million cancer deaths per year to more than 13 million by 2030. The poorer, resource-challenged regions of the world will suffer a disproportionate amount of this growing cancer burden. This lopsided cancer burden on the globe’s low-income populations prompted the European School of Oncology to convene the first World Oncology Forum (WOF) in Lugano, Switzerland, on October 12, 2012. The forum was based around a central question: Are we winning the war on cancer?

The WOF resulted in a 10-point action plan aimed at making government deliver on a commitment it made at the World Health Assembly in May 2012 to have a 25% reduction of preventable deaths from noncommunicable disease by 2025. The 10-point plan covered the following policy headings: prevent preventable cancers, treat treatable cancers, support all those living with cancer, accelerate finding cures for cancers that are not yet curable, and strengthen policy frameworks and health systems.

Building on the success of this forum, the second WOF was held in Lugano in October 2014, with the central theme of treating the treatable, which appealed to governments, international agencies, and policymakers wishing to expand access to early detection and care and to address problems in the global cancer ecosystem that hinders faster progress in the discovery and development of promising new therapies. The WOF assembled 127 of the world’s leading cancer experts including ASCO Chief Medical Officer Richard L. Schilsky, MD, who noted that the central focus of the second WOF was to follow-up on one of the two main recommendations from the first WOF, which was to treat the treatable.

“The discussions at the WOF basically went in two different directions. One had to do with outlining the steps that governments need to take in order to develop the infrastructure necessary to deliver cancer care in resource-challenged regions—thus achieving the goal of treating the treatable,” said Dr. Schilsky.

Dr. Schilsky explained that the cancer therapies that they recommended were the basic oncologic tools. “We urged the deployment of known effective therapies such as fundamental radiation therapy services as well as access to about 15 generic cancer chemotherapies that are proven to be effective in treating nearly 75% of the most common malignancies, without having to venture into costly targeted therapies,” said Dr. Schilsky.

Along with infrastructure development and deploying treatments, Dr. Schilsky said that another important step was educating populations, especially in the developing world, about cancer risk factors and early detection. “Education could go a long way in reducing the incidence of cancers, which will be the focus of the next WOF: prevent the preventable. The other prong of our ‘treat the treatable’ initiative is to find ways to ensure that all patients who need pain control have access to analgesics, such as morphine. Right now, many countries have little or no morphine with which to treat the cancer patient’s pain, which borders on the inhumane. That’s definitely an area we will address,” noted Dr. Schilsky.

“The other major issue of discussion [the second of the two directions referred to above],” continued Dr. Schilsky, “had to do with how to accelerate the discovery, development, and deployment of new cancer therapies. We concluded that there needed to be greater partnerships between academic research and the pharmaceutical sector to bring new agents into clinical testing and ultimately the global market. Moreover, as a cancer community we need to set the expectation bar higher, so we should no longer devote resources to developing cancer drugs that produce only small, incremental advances. Instead, those resources should be redirected into further discovery work in the laboratory.”

Dr. Schilsky stressed that spending $150 million on a phase III clinical trial for a drug that gives 6 weeks of improved survival is not adding dollar value to the system. “We need to be able to learn about new drugs through the continuum of their life cycles, from the regulatory system that approves a drug’s indication and the reimbursement system that makes a drug affordable, by using value-based metrics that base reimbursement levels on how the drug performs in its various indications,” he said.

Dr. Schilsky concluded by emphasizing that the wide-reaching goals set by the WOF must be tempered by pragmatism. “We need to face the fact that treating the treatable is a population-specific goal. We must use the resources that are available and cost-effective and can be deployed fairly efficiently, without worrying about holding the standards of care that we have in the United States and other wealthy industrialized nations to resource-challenged regions.”

Following the WOF, the Union for International Cancer Control organized the World Cancer Leaders Summit to discuss the economic issues of global cancer. The figures are staggering. When the adjusted monetary loss of output from patients with cancer is added to the costs of their treatment, it amounts to more than $3 trillion of the world’s economy annually—equivalent to around 1.5% of global gross domestic product.

Franco Cavalli, MD, Director of Oncology at the Oncology Institute of Southern Switzerland in Bellinzona, and one of the prominent leaders of the first and second WOFs, was invited to the World Economic Forum in Davos, Switzerland, to discuss the economics of cancer. Based on a proposal formulated at the World Cancer Leaders Summit, Dr. Cavalli presented the idea of creating a global cancer fund to reduce cancer incidence and lessen the overall economic burden that the disease places on the developing world.

“We need to draw on lessons learned from impressive progress in tackling cancer that has been achieved in recent years in countries such as Thailand and Brazil, as well as the successes of global initiatives in other disease areas, including the Global Alliance for Vaccines and Immunizations (GAVI) and the Global Fund to Fight AIDS, Tuberculosis and Malaria (GFATM),” said Dr. Cavalli.

Dr. Cavalli and his associate, Rifat Atun, MD, Professor of Global Health Systems at the Harvard School of Public Health, Boston, recently published a commentary centering on the global cancer fund in The Lancet Oncology.1 Dr. Cavalli said that the priorities of the global cancer fund would be the development of cancer registries for cervical and breast cancers and pediatric oncology as well as investment in cancer prevention, treatment, and care to alleviate needless suffering and to realize significant health and economic benefits in low-income countries.

Asked if he felt optimistic about the chances of a global cancer fund being realized, Dr. Cavalli responded, “I have mixed feelings about how the oncology community’s concerns over the growing incidence of cancer in the developing world were received. The representatives from the oncology community were in agreement, but there was opposition to our initiatives from some very powerful people who felt that global cancer was way down on the priority list. In order to launch a global cancer fund, similar to the one for AIDS, we need strong political pressure—and we are working on that. However, it will require concerted and bold action at national and international levels.” ■