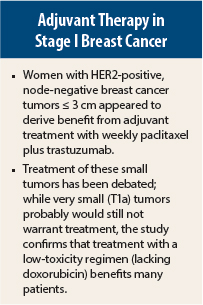 The development of effective targeted therapies provides the opportunity not only to improve outcomes, but to back off toxicity by limiting some of the chemotherapy. The challenge now is to determine in whom a completely chemotherapy-free regimen might be a possibility.

There may be a benefit for treating small HER2-positive tumors—a breast cancer subset for whom treatment recommendations have not been established but for whom there is still risk of recurrence—and this can be done with little toxicity, according to a multicenter study presented at the 2013 San Antonio Breast Cancer Symposium.1

“Smaller, HER2-positive, node-negative breast cancers are thought to have a sufficiently high chance of recurring that many doctors have offered patients a combination of chemotherapy and trastuzumab [Herceptin] to reduce that risk,” said senior author Eric P. Winer, MD, Chief of the Division of Women’s Cancers in the Susan F. Smith Center for Women’s Cancers at Dana-Farber Cancer Institute, Boston. “But, as this approach had not been tested in many women with smaller tumors, we have lacked a standard approach to preventing recurrence in this group.”

That may be largely because previous studies of chemotherapy plus anti-HER2 treatment for node-negative patients have included few subjects with tumors measuring < 2 cm and virtually none with tumors ≤ 1 cm, a group for whom treatment has been debated. The findings of the current study offer, for the first time, a set of standard treatment guidelines for recurrence prevention in this group of patients, according to Dr. Winer.

The Adjuvant Paclitaxel and Trastuzumab (APT) study of 406 women with HER2-positive, node-negative tumors ≤ 3 cm was presented at the San Antonio Breast Cancer Symposium by Sara M. Tolaney, MD, MPH, a medical oncologist at Dana-Farber Cancer Institute, who explained the need to balance risks and benefits in a group of patients who will likely derive a small absolute treatment benefit.

“In balancing the risks and benefits of treatment, the development of regimens with lower degrees of toxicity is particularly important for this patient population,” she said.

The investigators, therefore, designed a more tolerable chemotherapy regimen than is often given. Patients received only paclitaxel at 80 mg/m2 plus trastuzumab at 2 mg/kg weekly for 12 weeks, followed by 9 months of trastuzumab alone at 6 mg/kg every 3 weeks. The study was a nonrandomized prospective trial to define the outcomes in a uniformly treated cohort based on the fact that “a prospective randomized trial of trastuzumab-based therapy is likely not feasible,” Dr. Tolaney said.

After a median follow-up of 3.6 years, only 10 of 406 patients experienced a recurrence or death, accounting for 2.5% of the population. There were only four local/regional recurrences (0.9%).

Few adverse events were noted. Only two patients (0.5%) developed symptomatic congestive heart failure, and both cases resolved after discontinuation of trastuzumab. Asymptomatic declines in left-ventricular ejection fraction were observed in 13 patients (3.2%), and 11 patients were able to resume trastuzumab after a treatment interruption.

Dr. Tolaney acknowledged that the study has limitations. It was a single-arm, nonrandomized trial, and about 20% of enrolled patients had T1a tumors that already have a very favorable prognosis. Also, two-thirds had hormone receptor–positive tumors, and this may be associated with late recurrences.

Nevertheless, she suggested that paclitaxel plus trastuzumab can be considered “a reasonable and appealing approach for the majority of patients with stage I HER2-positive breast cancer.”

Dr. Winer suggested that the results were practice-changing. For this population, the paclitaxel/trastuzumab doublet “should be considered one of the standard strategies for recurrence prevention,” he said.

“This doesn’t mean that every single patient with node-negative HER2-positive disease has to be treated with trastuzumab and chemotherapy, and there are patients with T1a tumors who almost certainly should not be treated systemically,” he said in an interview with The ASCO Post.

The T1a population accounted for 20% of subjects, while 9% had relatively large T2 tumors. “This was not just a population of patients with tumors less than 1 cm, and in spite of that, the outcome was very favorable,” he noted.

“We think that for most women with stage I HER2-positive breast cancer, trastuzumab plus paclitaxel is an entirely reasonable, and certainly appealing, regimen because of its low-toxicity profile,” he maintained.

The APT study also “speaks to a larger point,” he said, “and that is the development of effective targeted therapies provides the opportunity not only to improve outcomes, but to back off toxicity by limiting some of the chemotherapy. The challenge now is to determine in whom a completely chemotherapy-free regimen might be a possibility.” ■

Debu Tripathy, MD, Professor of Medicine, Co-Leader of the Women’s Cancer Program, and the Priscilla and Art Ulene Chair in Women’s Cancer at the University of Southern California Norris Cancer Center, Los Angeles, commented on the APT study for The ASCO Post.