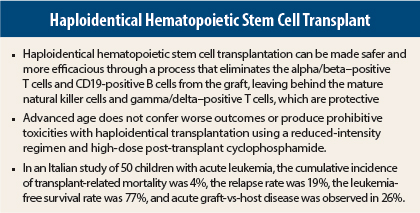 Almost every patient has at least one haploidentical relative. But until recently, [haploidentical transplant] carried excessive risk.

HLA-haploidentical hematopoietic stem cell transplantation can be performed safely, yield good outcomes, and greatly expand the number of patients with hematologic malignancies who can be treated with stem cell transplant, studies presented at the 2013 American Society of Hematology (ASH) Annual Meeting suggested.

A major obstacle to success with allogeneic bone marrow transplant has been the frequent lack of suitable matched donors. Only one-quarter of siblings will be an HLA-match, and there is only a 50% chance overall—and much lower for African Americans and ethnic minorities—of finding a matched unrelated donor. Time is also a factor: It can take months to coordinate an unrelated transplant.

When a fully matched donor is not available, reduced-intensity bone marrow transplants using haploidentical, or half-matched, related donors can be safe and effective even in elderly patients, ASH presentations suggested.

These have included an increased risk of graft rejection and of graft-vs-host disease. Reduced-intensity regimens have made them safer, and further advances in safety and efficacy are being achieved through novel approaches, investigators reported at the ASH meeting.

The Johns Hopkins investigators showed that advanced age was not associated with prohibitive toxicities from haploidentical transplant when patients are otherwise transplant-eligible.1

“We found no apparent decrement in overall outcomes in patients aged 60 and older or even 70 to 75, compared to those in their 50s,” Dr. Kasamon said. “Since many elderly patients may lack a suitable matched sibling donor, the haploidentical option becomes even more attractive.”

Investigators retrospectively evaluated 273 patients aged 50 to 75 with various hematologic malignancies who received a nonmyeloablative related haploidentical bone marrow transplant with post-transplant high-dose cyclophosphamide (50 mg/kg either once on day 3 or twice on days 3 and 4) plus mycophenolate mofetil and tacrolimus for graft-vs-host disease prophylaxis.

“Of 27 patients aged 70 to 75, there were four nonrelapse deaths (15%), nine relapses (33%) and 14 patients alive without relapse (52%) at a median of 11 months after [bone marrow transplant],” Dr. Kasamon said. Nonrelapse mortality was not significantly different among the three age groups.

Donor May Be ‘in the Same Room’

“These results underscore that a reduced-intensity, related haploidentical transplant should be considered a very reasonable treatment option for suitable patients—up to at least age 75—who require a transplant,” Dr. Kasamon suggested. In most cases, Johns Hopkins no longer searches for a matched unrelated donor for patients with a relative who is a potential haplolid donor.

Laurence J.N. Cooper, MD, Professor of Pediatrics and Director of the Immunology Laboratory at The University of Texas MD Anderson Cancer Center, Houston, who moderated the press conference where the Johns Hopkins study was described, said the approach “moves the technology forward in terms of efficacy.”

“First, with this new stem cell modification technology, we can pull out just the cells we want,” he said. “The second advantage is that this shortens the time to finding the donor. We don’t have to identify potential donors from a massive registry. We will be able to  find a donor in the same room as the patient.”

T-cell depleted HLA-haploidentical hematopoietic stem cell transplantation can be made safer and more efficacious through the removal of alpha/beta–positive T cells and CD19-positive B cells from the graft, an approach pioneered and reported at the ASH meeting by Italian investigators.2

Alice Bertaina, MD, of the Department of Pediatric Hematology-Oncology, IRCCS Bambino Gesù Children’s Hospital in Rome, and colleagues selectively removed those cells that are most likely to trigger donor cells to attack recipient cells.

“The selective graft manipulation results in effective prevention of both acute and chronic [graft-vs-host disease], rapid recovery of neutrophil and platelet counts and low transplant-related mortality,” she said. “Although the median observation time is still limited, the cumulative incidence of disease recurrence is encouraging.”

Their study included 50 children (median age, 10) with acute lymphoblastic or acute myeloid leukemia with a parent serving as the haploidentical donor. The donor’s blood was filtered through a column where magnetic microbeads captured and separated the T cells to be retained from those slated for elimination. Patients underwent a myeloablative regimen, with or without total-body irradiation, and received anti–thymocyte globulin and rituximab (Rituxan).

With a median follow-up of 18 months (range, 6–36 months), the cumulative incidence of transplant-related mortality was only 4%, the relapse rate was just 19%, and the leukemia-free survival rate was 77%, rising to 80% in the subset of patients with acute lymphoblastic leukemia.

Sustained primary engraftment occurred in all patients, and median time to reach an absolute neutrophil count > 0.5 × 109/L and platelet count > 50 × 109/L was 13 days and 11 days, respectively. Chimerism at engraftment was 100%.

“The recovery of both innate and adaptive immunity after this type of allograft is accelerated in comparison to the infusion of CD34-positive selected cells,” she noted. “A low tumor burden and the use of total-body irradiation during the preparative regimen can further
optimize the outcomes.”

Dr. Bertaina predicted that using this approach, more patients will receive transplants and fewer will die during the procurement of an unrelated donor.

“Until now, we have searched for unrelated volunteer donors, but it is difficult to propose to the parents that we must wait for this search, before we treat,” she said. “These results open another avenue, and show that it can actually be advantageous to choose a haploidentical relative.” ■

Jeffrey Miller, MD, Professor of Medicine at the University of Minnesota and Deputy Director of the Masonic Cancer Clinic in Minneapolis, commented on the haploidentical hematopoietic stem cell transplantation studies presented at the American Society of Hematology meeting for The ASCO Post