Approval was based on an open-label trial (EORTC 18991) comparing weekly peginterferon alfa-2b (n = 627) vs observation (n = 629) starting within 84 days of regional lymph node dissection in 1,256 patients who had adequate surgical resection of primary cutaneous melanoma and affected regional lymph nodes.3 Patients were assessed for local and regional recurrence or distant metastases every 3 months for the first 2 years of treatment and subsequently every 6 months through the end of up to 5 years of treatment.

Relapse-free survival, the primary endpoint of the trial was defined as the time to the first local or regional recurrence, distant metastasis, or death. Based on 696 relapse-free survival events, peginterferon alfa-2b was associated with a significant prolongation of median relapse-free survival from 25.5 months to 34.8 months, representing an 18% reduction in risk of relapse (HR = 0.82, P = .011). After 525 deaths on study, there was no difference between the two groups with regard to overall survival (HR = 0.98, 95% CI = 0.82–1.16).

Peginterferon alfa-2b, a pegylated alpha interferon, is a pleiotropic cytokine with immunomodulatory effects. Its mechanism of action in melanoma is not known. The drug is a conjugate of recombinant interferon alfa-2b and monomethoxy polyethylene glycol (PEG); pegylation results in a longer half-life and permits less frequent injection compared with nonpegylated interferon.

Peginterferon alfa-2b is given by subcutaneous injection at a dose of 6 μg/kg/wk for eight doses followed by 3 μg/kg/wk for up to 5 years. Acetaminophen at 500 to 1,000 mg should be given 30 minutes prior to the first dose and as needed thereafter.

Treatment should be withheld for absolute neutrophil count (ANC) < 0.5 × 109/L, platelet count < 50 × 109/L, Eastern Cooperative Oncology Group (ECOG) performance status ≥ 2, or nonhematologic toxicity of grade 3 or worse. Treatment can be resumed at a reduced dose level when all of the following conditions are met: ANC ≥ 0.5 × 109/L, platelet count ≥ 50 × 109/L, ECOG performance status 0 to 1, and improvement to grade 1 or resolution of nonhematologic toxicity that prompted withholding of treatment. Treatment should be permanently discontinued for persistent or worsening severe neuropsychiatric disorders, grade 4 nonhematologic toxicity, inability to tolerate a dose of 1 µg/kg/wk, or new or worsening retinopathy.

Recommended dose modifications for the first eight doses at 6 μg/kg/wk are first to 3 μg/kg/wk and then to 2 and 1 μg/kg/wk. The 3-μg/kg/wk dose should be reduced first to 2 and then 1 μg/kg/wk. 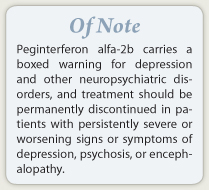 Peginterferon alfa-2b carries a boxed warning for depression and other neuropsychiatric disorders. The risk of serious depression, with suicidal ideation and completed suicides, and other serious neuropsychiatric disorders are increased with alpha interferons. As noted, treatment should be permanently discontinued in patients with persistently severe or worsening signs or symptoms of depression, psychosis, or encephalopathy. These disorders may not resolve after stopping peginterferon alfa-2b.