At the first planned interim analysis of the randomized, placebo-controlled AFFIRM trial, MDV3100 reduced the risk of death by 37% in men with castration-resistant prostate cancer for whom docetaxel treatment had failed. At that time, an independent data monitoring committee recommended that the trial be halted and patients in the placebo 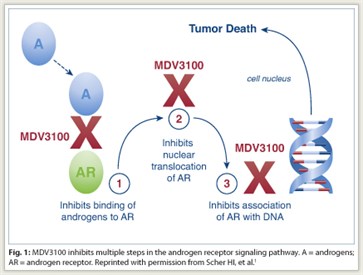 “The survival advantage coupled with the favorable side-effect profile positions MDV3100 as a potential front-line treatment in the postdocetaxel setting,” Dr. Scher said. The drug is currently under review at the FDA.

AFFIRM enrolled 1,199 men with castration-resistant prostate cancer in whom docetaxel treatment failed and randomly assigned them 2:1 to oral MDV3100 or matched placebo. Median overall survival was 18.4 months in the MDV3100 arm vs 13.6 months in the placebo arm (P < .0001). Median radiographic progression-free survival was also significantly superior for MDV3100 (8.3 vs 2.9 months; P < .0001). The survival benefit of MD3100 was significant across all prespecified subgroups.

“These favorable changes [in imaging and PSA] are consistent with the survival benefit,” Dr. Scher said.

The adverse event profile of MDV3100 was similar to that of placebo. More serious adverse events were reported in the placebo arm (38.6%) than in the MDV3100 arm (33.5%). More grade 3 or higher adverse events were also reported in the placebo arm (53.1% vs 45.3%). Adverse events of interest included a slightly higher percentage of patients with low-grade fatigue on the MDV3100 arm as well as a small number of seizures (0.6%). During the discussion following the presentation, Dr. Scher said that all five cases of seizures were reviewed thoroughly, and two of the cases were due to brain metastases. “The rare event of seizure is unlikely to deter physicians from prescribing MDV3100 given the robust survival benefit and the overal safety profile,” he commented. 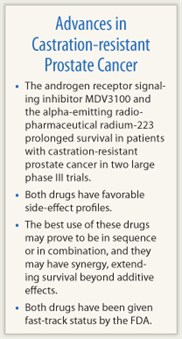 ALSYMPCA enrolled 922 men with progressive, symptomatic metastatic castration-resistant prostate cancer with two or more known bone metastases but no visceral metastases. They were randomly assigned to radium-223 vs placebo in a 2:1 ratio.

“To our knowledge, radium-223 is the first drug ever shown to be effective in the prevention of spinal cord compression. This is an important observation, because this is a devastating complication of bone metastases,” Dr. Parker stated.

Disclosure: Dr. Parker has received honoraria from Bayer for serving on advisory boards. Dr. Scher has been a consultant or advisor for and has received research funding from Medivation.

“My comment on the AFFIRM trial is ‘wow, very impressive.’ The median survival and the declines in PSA levels are impressive, and this is going to change the way we care for patients in our practices,” said Nicholas Vogelzang, MD, medical oncologist with Comprehensive Cancer Centers of Nevada and...