The study was published in the Journal of the American Medical Association1 and widely reported by the popular press, including The New York Times,2 the Los Angeles Times,3 and ABC and CBS News. While news coverage generally highlighted the findings of great variability among surgeons, some reports linked reexcision rates with unnecessary surgery.

“That’s really not what our major finding was,” Laurence E. McCahill, MD, the study’s lead author, explained in an interview with The ASCO Post. “We didn’t mean to suggest that there were unnecessary surgeries that are being performed. We said we don’t have an answer regarding the necessity of the reexcisions in patients with negative but close margins. We clearly have variability in care, and that is likely based on the lack of evidence about what constitutes an adequate surgical margin following the initial partial mastectomy. At this point, I think that we should be seeking the evidence to make it clear,” Dr. McCahill added. He is the Director of Surgical Oncology and Assistant Director of the Lacks Cancer Center, and Professor of Surgery at Michigan State University in Grand Rapids, Michigan. 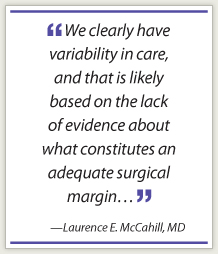 “Surgical margin status was recorded for the initial breast-conserving procedure and for any subsequent excisions. Margins were categorized as positive if there was tumor at the inked margin in the pathology report,” according to the published study. “For negative margins, the distance of the closest margin to the specimen edge was recorded in 1-mm increments.”

Reexcision rates for margin status following initial surgery were 85.9% for initial positive margins, 47.9% for less than 1.0-mm margins, 20.2% for 1.0- to 1.9-mm margins, and 6.3% for 2.0- to 2.9-mm margins. While reexcision rates varied substantially by surgeon and institution, the rates “were not associated with surgeon procedure volume after adjusting for case mix,” the study found.

The overall reexcision rated in the study was 23%, lower than previous studies reporting rates up to 50%. This lower rate may be at least partly due to the extensive exclusion criteria. “We excluded all factors that have been associated with higher reexcision rates so that we would have very uniform populations to compare between centers and surgeons,” Dr. McCahill stated.

The investigators concluded that the variability in reexcision rates “cannot be explained entirely by patients’ clinical factors,” but some clinical factors did influence reexcision rates. Univariable analysis showed that women younger than 35, women with less than an 18.5 body mass index, and those with initial margins of less than 1 mm were more likely to have reexcisions. “Other factors associated with a higher reexcision rate of positive margins included lobular breast cancer as a final diagnosis and the presence of lymphovascular invasion demonstrated on histology,” the investigators reported.

While the majority of patients had a confirmed diagnosis of breast cancer prior to partial mastectomy, for 109 patients (5.7%), the initial procedure was an open surgical breast biopsy. “It was relatively infrequently utilized, but certainly it was strongly associated with a reexcision,” Dr. McCahill said, “again driving home the message that we really don’t want to be doing open surgical diagnostic breast biopsies.”

Variations in reexcision could be influenced by “technical factors in terms of how surgeons operate, which we did not analyze in this paper, but we hope to in a future study, because we have that data.” Dr. McCahill said. These technical factors could include use of ultrasound during surgery or getting an intraoperative pathology interpretation. “We may be able to look at whether there is anything technically that surgeons are doing to have a lower initial positive-margin rate. Because we can all agree that initial positive margins are a suboptimal outcome,” Dr. McCahill added.

“This is one of the first reports to suggest that it appears that surgeons are less likely to reexcise for positive anterior or posterior margins,” Dr. McCahill noted. “And that’s because, depending on how the surgeon operated, there may be no more excisable breast tissue in the anterior or posterior direction.”

Margins Not the Whole Story

“The majority of time there is no pathologically identifiable tumor in the reexcision, and that is always hard to interpret,” Dr. McCahill noted. “Is that a good thing because it means your final margin was adequate? Or is it a bad thing in that maybe you didn’t necessarily need to do the second surgery?” In this study, of the 509 patients undergoing a second surgery, 89.2% of patients had 1 reexcision, 9.4% had 2 reexcisions, and 1.4% had 3 reexcisions. “Does no tumor identified on the reexcision pathology report mean it was a swing and a miss—you were to the left or to the right or superior” to the margin of concern? “Reexcision is not an exact science,” Dr. McCahill continued.

For 190 of the 509 patients (37.3%) undergoing second surgery, the final procedure was a total mastectomy. “This again really drives home the point that initally suboptimal margins are not a minor issue,” he said. “Clearly, for these women mastectomy was not their first choice.”

Opening Up a Dialogue

As a result of the JAMA study, Dr. McCahill received not only numerous press inquiries, but many e-mail comments from colleagues as well. “I hope this will open up a dialogue to really identify what is the best and most needed approach,” he said. “Availability and reporting of data in other arenas of health care have demonstrably improved health care,” Dr. McCahill noted. “I personally think that if there were greater  transparency, you probably wouldn’t have too many people with reexcision rates in the 40% to 50% range. I think that would drive surgeons to reevaluate how they are doing things and perhaps readdress their decision-making or their technical factors in terms of how they might get a better initial outcome,” he said.