Five-year analysis of the VISTA trial confirms a survival advantage with VMP (bortezomib [Velcade], melphalan, and prednisone) for upfront treatment of multiple myeloma in patients who were not transplant candidates. At a median follow-up of 60.1 months, a 13-month improvement in overall survival was seen in patients treated with VMP vs MP (melphalan and prednisone). Final results of VISTA were presented at the 53rd Annual Meeting of the American Society of Hematology (ASH).1

“The 5-year results of VISTA confirm the significant survival benefit of VMP vs MP and rescue by bortezomib at relapse. Despite substantial use of novel salvage therapies at disease progression, the survival advantage of VMP over MP could not be regained in patients assigned to upfront MP. These data demonstrate that it is important to provide the best induction therapy—VMP—upfront. We saw no emerging safety signal for an increase in second primary malignancies. I think these data on second primary malignancies are solid, with the rate as expected in the general population or even lower. VMP is completely safe,” stated Jesús F. San Miguel, MD, Universitario de Salamanca, Salamanca, Spain. 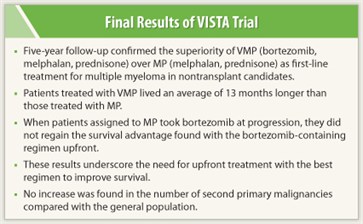 VISTA enrolled 682 patients, with a median age of 71. Approximately 30% were age 75 and older, and one-third had advanced disease. Less than 5% of patients in each arm were lost to follow-up.

Final results confirmed the overall survival advantage with VMP: Median overall survival was 56 months with VMP vs 43 months with MP (P = .0004). This benefit was maintained across all prespecified subgroups. Time to next treatment was significantly longer in VMP-treated patients (median of 27 vs 19.2 months, P < .0001) and treatment-free interval was also longer (16.6 vs 8.3 months, P < . 0001).

Subsequent therapies at relapse were similar in both groups, with the exception of bortezomib: 22% in the VMP group vs 43% given MP were treated with bortezomib at relapse. Among patients who required subsequent anticancer therapies, overall survival was significantly longer in those treated with VMP upfront (median of 55.7 vs 46.4 months, P = .0162).

Additional analysis showed that VMP did not induce more resistant relapses than MP. Further, mortality was greater in patients treated with first-line MP and subsequent bortezomib at relapse vs VMP upfront.

Disclosure: Dr. San Miguel has been on the advisory boards of Millennium, Celgene, Janssen, and Novartis.

Expert Point of View: Long-term Survival Benefit and Safety Confirmed for VMP Regimen in Multiple Myeloma in Patients Who Were Not Transplant Candidates

Commenting on the 5-year follow-up data of VISTA presented at the 2011 ASH meeting, Kenneth C. Anderson, MD, said, “This is the longest follow-up of protocols incorporating novel therapies into initial therapy of nontransplant candidates in myeloma. Remarkably, bortezomib with melphalan and...