After Rounds on the Leukemia Ward, a Young Doctor Finds His Calling in Stem Cell Transplantation

Internationally recognized stem cell transplant pioneer Richard E. Champlin, MD, was born in Milwaukee and moved to Homewood, a suburb on the southern lip of Chicago, with his parents when he was 3 years old. Following high school, Dr. Champlin entered Purdue University in Indiana to pursue a degree in engineering, during which time he developed an interest in psychology. “My father, who was a bit of a meddler in a fatherly way, strongly encouraged me to pursue engineering. Honestly, I’d always liked engineering during grade school, but I was looking for a career that had more human contact than engineering. So, I decided to pursue a medical degree at the University of Chicago Pritzker School of Medicine,” said Dr. Champlin.

During medical school, Dr. Champlin worked one summer at a drug addiction clinic, an experience that further solidified his decision to become a physician. “When I entered medical school, I first gravitated toward cardiology, which was a field that was making a lot of interesting advances,” he reflected. “However, during rounds, I was exposed to patients on the leukemia ward and felt the field of hematology would give me more opportunity to make a bigger impact on health outcomes. That’s why I went into hematology and ultimately into stem cell transplantation,” said Dr. Champlin.

Dr. Champlin began medical school in 1971, the same year President Richard Nixon signed the National Cancer Act, known as the War on Cancer. “I got my medical degree in 1975, and in those days, there was very little in terms of effective chemotherapies, but we were seeing some breakthroughs in leukemia and lymphoma treatment. I found it very exciting seeing leukemia patients on the brink of death having significant remissions from new chemotherapies, which later became a significant part of the model for the treatment of solid tumors,” said Dr. Champlin.

ON THE HIGHLIGHTS OF HIS CAREER: “One of the most exciting things in the field of transplantation today is the evolution into immune cellular therapy, where we can genetically engineer chimeric antigent receptor T cells or antigen-specific T cells, which can both fight the cancer and be added to help the transplant work better.”

A Career Matures With a Move Out West

As a young medical graduate, Dr. Champlin moved west for his residency training at the University of California, Los Angeles (UCLA). “During my residency, I had the opportunity to do some externships working on stem cell transplants in UCLA’s program. They were the pioneering days of a new technology, and being part of it really interested me. I ended up at UCLA for my fellowship training, where I focused on therapies for liquid tumors and stem cell transplantation. It was a pivotal period in my career,” said Dr. Champlin.

During his fellowship, Dr. Champlin worked with bone marrow transplantation expert Robert Peter Gale, MD, PhD, DSc (hs), who was on the UCLA faculty in the Department of Medicine, Division of Hematology and Oncology, where he focused on the molecular biology, immunology, and treatment of leukemia. Dr. Champlin later joined as Assistant Professor, rising through the ranks to Professor and ultimately being appointed Director of the Bone Marrow Transplant Center at UCLA, where he successfully competed for a P01 grant from the National Cancer Institute.

Volunteering at the Chernobyl Disaster

In 1986, the Chernobyl nuclear power plant in the former Soviet Union suffered a catastrophic core meltdown, the result of a flawed reactor design that was operated by inadequately trained personnel. When people are exposed to high doses of radiation, it can cause fatal bone marrow suppression, and a transplantation of healthy bone marrow is a treatment that might save some people suffering from radiation poisoning. High doses of radiation destroy other organs of the body, and many of the victims of Chernobyl died from gastrointestinal toxicity due to radiation exposure.

In a swift geopolitical maneuver, the industrialist Armand Hammer arranged for Dr. Gale, Dr. Champlin, and two other specialists to embark on a volunteer mission to do bone marrow transplants on the victims, and Dr. Champlin flew to Moscow shortly after the tragic meltdown. “The Soviets lacked equipment, such as the heavy-duty needles designed for extracting bone marrow from donors. We packed up what supplies we could and were on the 3:00 PM flight to Moscow to treat victims of the worst nuclear disaster in history,” he said.

In an article Dr. Champlin wrote in the Los Angeles Times, he stressed that the collaborative efforts he and the team from the United States made with the Soviet physicians and technicians clearly benefited the victims of the nuclear accident and stand as a legacy of which he is proud.

Dr. Champlin continued his clinical research and work, determined to make major advances in the still nascent field of stem cell transplantation. One of his contributions while at the UCLA Center for the Health Sciences was supervising the start of a matched unrelated donor program to find suitable donors for patients who had no compatible relatives.

However, UCLA was a general university and could only allocate a small percentage of its budget and resources to stem cell research. So, in 1990, the ambitious young clinician-scientist made the decisive decision to move to Houston, to lead a growing stem cell transplant program at The University of Texas MD Anderson Cancer Center, which he was instrumental in transforming into one of the largest and most successful stem cell transplant programs in the world.

“When I arrived at MD Anderson, they were doing about 225 transplants per year, mainly autologous procedures, which the center had invested heavily in at that time. However, my own clinical interest was in allogeneic transplants, which we need to treat leukemia patients. To that end, we created a program to address the multiple issues in allogeneic transplants, such as developing better pretransplant chemotherapy regimens; finding ways to optimize the cells in the transplant to prevent graft-vs-host disease while simultaneously leaving enough cells to mediate the immune graft-vs-leukemia factor that actually cures the patients; and improving the supportive care for patients with infections or graft-vs-host disease. So, we had our work cut out for us,” said Dr. Champlin. “We are in an increasingly productive period. Many of our recent improvements are the result of better laboratory methods to prepare the stem cells and bone marrow for transplantation as well as to enhance our ability to predict, and often minimize, serious complications.”

Dr. Champlin’s pioneering work includes the recognition of donor lymphocytes as the mediators of graft-vs-malignancy effect, the development of nonmyeloablative and reduced-intensity allogeneic transplants for older and relatively frail patients, and successful use of mismatched donor transplants.

According to Dr. Champlin, allogeneic stem cell transplantation is the first example of successful immunotherapy, given that patients with drug-resistant leukemias are not cured by the drugs, but rather by the immune effect of the transplant in which the new immune systems eradicate the malignant cells. “One of the most exciting things in the field of transplantation today is the evolution into immune cellular therapy, where we can genetically engineer chimeric antigen receptor [CAR] T cells or antigen-specific T cells, which can both fight the cancer and be added to help the transplant work better. We can even replace the transplant with cellular immune therapy, which is being currently done with CAR T cells, lessening the need for hematopoietic transplant,” said Dr. Champlin.

Asked to cite some of the major advances he’s seen over the arc of his long career that began in the early days of stem cell research, Dr. Champlin replied: “For example, we’ve been able to treat older patients, up to age 75, very successfully, which is a huge step forward. A large part of this advance in treating older patients has been the introduction of posttransplant cyclophosphamide, which has produced a remarkable reduction in the incidence of severe acute and chronic graft-vs-host disease, as well as the introduction of graft engineering techniques to remove the T cells that produce graft-vs-host disease without impairing the function of the transplant.”

He further highlighted the broader use of nonablative chemotherapy, which is less toxic than the high-dose anticancer drugs administered to transplant recipients in the past. Much better results from manipulating blood stem cells in the laboratory have allowed transplant reipicents to recover faster, with fewer adverse problems. Dr. Champlin also credits the intensive laboratory support throughout patients’ transplant experiences with boosting clinicians’ tracking of patients and helping them take steps earlier to reduce complications.

“I am particularly gratified by our program that provides blood and marrow transplants along with supportive care in a predominantly outpatient arena. We started this service several years ago, primarily to reduce costs, but we’re seeing enormous emotional benefits to patients who don’t want to spend prolonged periods in the hospital,” said Dr. Champlin.

As a result, several hundred transplant recipients have participated in the MD Anderson outpatient program. Through this program, they usually are hospitalized only to receive intensive chemotherapy; then they receive their transplants as outpatients and are followed in ambulatory care centers. 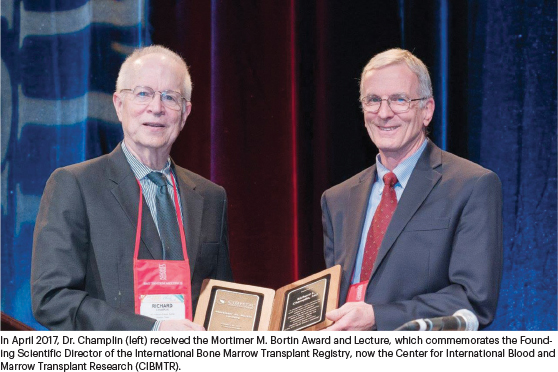 In 2020, Dr. Champlin retired as Chair of the Department of Stem Cell Transplantation at MD Anderson Cancer Center, after 32 years in that position. “After stepping down from my administrative duties, I now spend about half of my working life in the clinic caring for patients with leukemia. During the other half, I’m continuing to focus on clinical research along with teaching our fellows who aspire to join the field of transplantation. So, even though I’m no longer the department’s chair, I maintain a very busy schedule, doing something I really love,” said Dr. Champlin.

A pioneer in his field, Dr. Champlin was involved in the creation of many professional societies. He was President of the American Society for Blood and Marrow Transplantation (ASBMT) and the Center for International Blood and Marrow Transplantation Research. He played a major role in the establishment of the National Marrow Donor Program. He has earned laurels throughout his career, including the Lifetime Achievement Awards from the ASBMT and the Division of Cancer Medicine at MD Anderson.

So, what does a renowned transplant specialist do to decompress from his challenging career? “When I was a good deal younger, I ran marathons—back in my UCLA days, my colleagues and I in the transplant group took daily 4-mile runs around the campus. But now, I try to play a round of golf each week with my associates; it helps me take any frustrations I may have from work out on the golf ball. It’s a great way to get away from work, because to have any success at all in the game, you need to concentrate and block everything else out.”

The ASCO Post acknowledges Muzaffar H. Qazilbash, MD, for his contributions to this narrative. Dr. Qazilbash, a former student of Dr. Champlin’s, is now Professor in the Department of Stem Cell Transplantation at The University of Texas MD Anderson Cancer Center in Houston.