A Leader in Oncology Balances Philosophy, Medicine, and Humility

"The reality is that closure is a myth. My personal and professional experience with those who have lost friends and family, including children, has taught me that going on with life is not the same as gaining closure. The wound of loss is a part of each person’s life forever,” wrote hematologist/oncologist Stephen J. Forman, MD, in a poignant essay on the existential reality of loss and beyond, which was published in The Wall Street Journal. Dr. Forman always writes to the family who have lost a loved one under his care and makes a donation in memory of that person to the City of Hope in the weeks after the death.

Dr. Forman, who came from a family of east European immigrants, was born and reared in the Houston Galveston Bay Area, a hurricane-prone region surrounding the Galveston Bay estuary. “My earliest exposure to medicine was through my uncle, who was an internal medicine physician in Galveston. Watching him work with patients in the days when doctors still made house calls, often in the evening, carrying a black medical bag, had a significant influence on my own decision to become a physician.

One day in high school, I mentioned to a girl in my class that I was looking for a job, and she said I should contact her mom, who was a nursing director. I interviewed with her mother, and she got me hired as a nurse aid with the team led by Dr. Michael DeBakey in his cardiothoracic surgery program. This was in the frontier days of open-heart surgery. It was incredibly exciting with people from across the globe coming to Texas to have their heart valves replaced and aneurysms repaired. At that time, cardiac surgeons were inventing things that would then be used in the operating room, which was in full swing 7 days a week.”

ON NURTURING THE CAREERS OF YOUNG FACULTY: “A life in oncology doesn’t happen by circumstance or chance; you choose it, and I take that decision very seriously in how I train and mentor young cancer physicians.”

Dr. Forman explained his role in the program. “Initially part of my job was to take vital signs before morning surgical rounds. I still have a stopwatch, which still works, that was given to me by a man in his 70s when he left after a successful surgery,” he said. “It was a time when every aspiring doctor wanted to be a cardiothoracic surgeon; there was considerable excitement and hope attached to repairing damaged hearts and arteries.”

After graduating from high school, Dr. Forman entered St. John’s College in Annapolis, Maryland, a private liberal arts institution. St. John’s is one of the oldest institutions of higher learning in the United States, and it is where the Great Books curriculum had its genesis. Its strong admixture of literature, math, language, science, and philosophy was what intrigued Dr. Forman’s interest, as he believed the rich intellectual environment would provide him with a deeper and broader learning that he wouldn’t necessarily find in more traditional institutions closer to home. He went there without even having to visit the campus.

Dr. Forman explained: “After the first few years at St. John’s, I seriously considered a contemplative philosophical path in my educational journey, such as an academic post, but it soon became clear I needed to be engaged in a career that was centered where people lived their lives. In other words, I didn’t want to be in a position that was remote from the challenges faced by ordinary people as they made their way in the world. So, while at St. John’s, I came back to the conclusion that I wanted to use my St. John’s education as a foundation to pursue medicine,” he said. “At St. John’s we were really taught to listen respectfully and critically with an open mind that is wary of sophistry and dogmatism—a skill I’ve used throughout my career in hematology/oncology, both at the bedside and in the laboratory.”

Reflections on a Brief Encounter With a Dying Patient

“During my training at Harbor UCLA,” Dr. Forman recalled, “I began caring directly for people with cancer, which had a major impact on my thinking about what oncologists can and should be in their role as a physician, caring for both the patient and the family. I remember when I was an intern rounding with the team, and we went to a room where a man was dying of cancer, and the attending resident said we probably shouldn’t go in; it’s better not to bother him. It immediately struck me that it seemed more like if we entered the room, the patient would be bothering the resident, not the other way around. It was that experience, combined with subsequent training in hematology/oncology and bone marrow transplantation that led me to think that, probably more so than any other patients, people with cancer needed advocates, and that once we extended our hand to grasp theirs, that we do not let go no matter the outcome,” he stated.

After completing his residency program at Harbor General, Dr. Forman began a hematology fellowship at Los Angeles County and USC Medical Center in Los Angeles. “While I was doing my fellowship, I began reading papers about the early days of stem cell transplantation that E. Donnall Thomas had been doing. I was so excited by the potential of transplantation to treat diseases of the bone marrow and immune system that I did a 6-week elective rotation with Drs. Karl Blume and Ernie Beutler at City of Hope who began a transplant program in 1975–1976. That experience made me realize that I wanted to be on the scientific edge of what was evolving in that area of hematology/oncology. In 1978, I came back to the City of Hope as both an oncology fellow and as a staff physician to help grow the bone marrow transplant (BMT) program, which has matured into one of the largest and most successful in the world, both clinically and scientifically,” he shared.

Dr. Forman continued: “As the therapy became a field, I edited the first BMT textbook with Karl Blume and E. Donnall Thomas, who, as you know, won the Nobel Prize in 1990 for developing transplantation as a therapy for leukemia and other diseases. It was an honor to work with him. All that mattered to him was finding the scientific truth and how we could use that knowledge to help a patient with cancer. For us, there was no result that was good enough and that we should strive each day to advance the field so we could help more people. And the new field of chimeric antigen receptor T-cell therapy evolved from the transplant program as we recognized that the immune system was a critical component that leads to a cure,” commented Dr. Forman. “I began working with Dr. Michael Jensen, who came to City of Hope from Phil Greenberg’s lab in Seattle to build the CAR [chimeric antigen receptor] T-cell program at the City of Hope, and then I became Director of the T-Cell Therapeutics Laboratories when he returned to Seattle in 2010.

A Life in the Day

In 1987, Karl Blume, MD, who was Head of City of Hope’s BMT Program from 1976 to 1987, left to build a new transplant program at Stanford University. “When Dr. Blume left, I became the director of hematology/BMT at City of Hope. Dr. Blume, Dr. ­Thomas and I remained in close collaboration; in fact, given the connection between the three programs, we were jokingly referred to as the West Coast mafia of Stanford and City of Hope and the Fred Hutchinson Cancer Center. I remained in that position as Director of Hematology/Transplant for about 38 years. My job was to lead the program, and to create and sustain a culture of scientist investigation and very personal patient care while developing the next generation of physician scientists,” Dr. Forman stated. 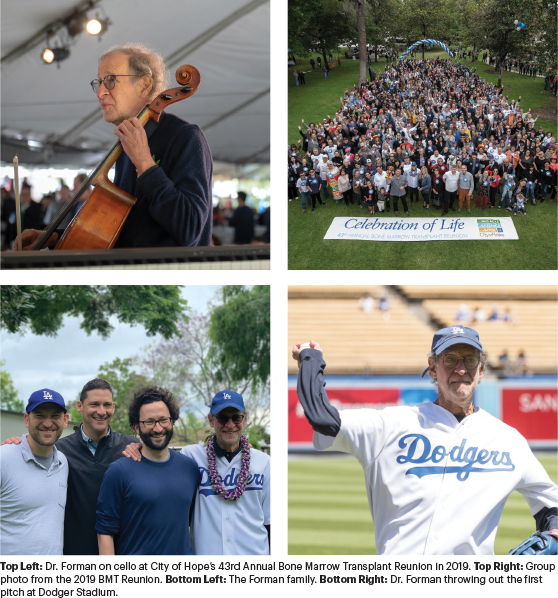 Equally important to Dr. Forman was to nurture the careers of the young faculty. “A life in oncology doesn’t happen by circumstance or chance; you choose it, and I take that decision very seriously in how I train and mentor young cancer physicians,” he commented.

Under Dr. Forman’s leadership, the City of Hope program performed its 17,000th BMT this past year, making it one of the largest and most successful programs in the nation, now performing nearly 800 transplants annually. For 16 of the past 17 years, City of Hope’s BMT program has achieved a 1-year survival above the expected rate, according to the Center for International Bone and Marrow Transplant Research. Dr. Forman has received many accolades throughout his career, including the 2019 DKMS Mechtild Harf Science Award and the E. Donnall Thomas award given by ASBMT. “Each year since 1977 we have had a BMT patient reunion, now attended by thousands of people, a festive and emotional occasion for everyone. Each patient wears a button indicating the number of years since their own transplant.

Dr. Forman recently transitioned as Chair of City of Hope’s Department of Hematology and Hematopoietic Stem Cell Transplantation. “My day now is spent seeing hospitalized patients beginning at 7:00 AM. I also work with my colleagues in the laboratory doing CAR T-cell therapeutic research. I oversee several labs and work with principal investigators on their research and translational clinical trial efforts. When I returned to the lab 12 years ago, it was not only to conduct research in hematologic malignancy, but also solid malignancies such as brain tumors. Ultimately, we’re trying to make immunotherapy the fourth arm of cancer therapeutics. Every day is still incredibly satisfying, especially as I’m fortunate to work in both the clinic and the lab, with patients, nurses, and talented scientists, where research has the potential to help more people suffering from a wide spectrum of cancers,” he explained.

A Letter in a Drawer

Dr. Forman shared some closing thoughts about cancer and closure. “I received a letter from an older woman whose husband had passed away. I didn’t know her, as she wasn’t one of our patients, and neither was he. Why would she be writing to me? After her husband died, she was cleaning out his drawers and found an envelope hidden under the socks that was addressed to her. When she opened it, she found the op-ed I had written for The Wall Street Journal called ‘No, You Don’t Need Closure.’ He left a note that it was a gift to her from him. So, she wrote to thank me, because this is what her husband left to help her cope with her loss and to be able to move on with her life.”

Dr. Forman explained why he found the experience so incredibly moving, especially because it was shared with someone he did not know personally. “It was, indeed, a shared human experience, and it allowed me to reflect upon essential questions about who we are as humans, as family, as members of a society,” he continued. “Looking back, I certainly see my experience at St. John’s College as a formative component in how I evolved as an oncologist, where mortality is always a reality while trying to remain humble in the presence of great mystery and challenge.”

What does a busy clinician/researcher do to decompress? “Most importantly, I see and spend time with my family, children, and grandchildren. I write essays and op-eds and am an avid reader. I also play and compose music for the cello and piano, and I still fantasize about playing baseball for the Dodgers! But I love my work, so my life is a busy blend of things I really enjoy. And it is still, after these many years, a privilege.”