Prior to the birth of the steel industry, Luxembourg was a poor and rural country. At the start of the 19th century, many Luxembourgers searching opportunity emigrated to the United States. The hardiest among them ventured into the Great Plains region to take advantage of homesteading opportunities, such as the descendants of prostate cancer expert Michael Glodé, MD, who was born and reared in Chadron, Nebraska, a small city surrounded by prairie grassland. The population was 5,851 at the 2010 census.

The small city on the Plains is also home to Chadron State College. According to Dr. Glodé, given that most of the teachers at the local schools were wives of the college’s professors, the education was a step up from most small towns in similar districts. “Both of my parents attended Chadron State College but dropped out during the Great Depression.”

Dr. Glodé noted that medicine runs in his family. “My mother eventually became a licensed practical nurse and later trained as an x-ray technician while I was in grade school. Maybe something about the environment had a subliminal effect; one of my sisters became an RN and got her masters in psyche nursing, the other sister became a missionary MD and spent her life in public health, and all three of us married doctors. Then there was my great-great uncle who sold patent medicines from his wagon. “He was what’s commonly referred to as a snake oil salesman,” said Dr. Glodé.

ON THE HIGHLIGHTS OF HIS CAREER: “I saw the Internet revolution unfolding before our eyes and strongly felt ASCO needed to position itself in this emerging space. I think we did the first virtual meeting of any professional society. Being at the forefront of what has become a major component in ASCO’s global presence and work was one of my career’s greatest pleasures.””

In 1959, Dr. Glodé had “a life-changing event” during a junior high school football game against Chadron’s Highway 20 rival. “I spotted the kick returner carrying the ball straight toward me,” he said. “I hurled myself at him, and as I made contact, an incredible snap shook my body; my femur had been fractured in mid-shaft. At the hospital, a stainless-steel pin was drilled through the distal femur, attached via a clamp to a rope, and the rope was routed via pulleys to weights hanging at the end of the bed.”

Dr. Glodé continued: “The highlight of the first week in traction was the visit of a couple of the cheerleaders. I had to eventually have the femur refractured because it was healing at an awkward angle and would have caused lifelong issues. I spent the next 4 months on crutches, but the entire experience convinced me that medicine was my calling. I nonchalantly signed my classmates’ senior yearbooks with “Mike Glodé, MD-73”; as I graduated in 1965, I figured that’s when I’d have my medical degree.”

Dr. Glodé entered the University of Nebraska–Lincoln (UNL) as a zoology major, yet his first mentor was a young Princeton graduate from an East Coast family named Ted Beck, who took Dr. Glodé under his wing. “Ted and I really hit it off,” Dr. Glodé shared. “He really took an interest in me and truly taught me how to write. Ted also introduced me to his friend Laird Myers, then Chief of Medicine at Memorial Sloan Kettering (MSK), who gave me my first lab job at MSK.” Going to the Big Apple was an amazing experience for Dr. Glodé: “It was the first time I’d been to the East Coast, and things were very different from Nebraska.”

That same year he also  met his future wife, Mimi Rose, who was also an aspiring doctor at UNL. Interestingly, they double-dated with future ASCO President Jim Armitage and his girlfriend at the time. But it was the incredible experience in the lab at MSK that ultimately swayed him toward a career in oncology. Ted Beck was more than a mentor. He became a great friend, who was best man at his wedding.

Dr. Glodé explained that in the late 1960s, America’s medical schools were eager to shorten the time it took to become a physician. For instance, Johns Hopkins offered a 6-year program out of high school, and it became popular to apply to the University of Nebraska medical school after only 3 undergraduate years. “Washington University in St. Louis decided to send faculty out to recruit students, which I thought was pretty amazing,” explained Dr. Glodé. “So, I signed up for an interview and was overjoyed when I received my acceptance letter in the mail, a couple of weeks later.”

Dr. Glodé arrived at Washington University in St. Louis in 1968, a notably tumultuous year in U.S. history. Martin Luther King, Jr. and Robert F. Kennedy were assassinated, the Vietnam War was raging, and sociopolitical turmoil erupted on college campuses and cities across the country. It was also a year of deep personal loss for Dr. Glodé. “My father, who had leukemia, died that year. As Sigmund Freud said, the most eventful day in a man’s life is the day his father dies, and that’s probably true. And a friend from high school back in Chadron was killed in Vietnam, which brought the reality of the war home,” he said.

During his second year in medical school, Dr. Glodé was impressed by several attendings in hematology (oncology was not a specialty at that time): Drs. Stu Kornfeld, Phil Majerus, and Chief of Medicine Carl Moore. That year, he also married his fiancé, Mimi, who was equally immersed in her medical studies.

“When it was time to look for internships, there wasn’t a computerized match, so you were still required to apply, visit prospective hospitals, interview, and then list your choices in order. Mimi and I drove the perimeter of the country during the fall of our senior year. We interviewed at all the major medical centers to find a place that would take both of us. We were fortunate to end up at UT Southwestern in Dallas, as my wife was passionate about pediatric infectious diseases and one of the lead doctors in the field was there.”

Dr. Glodé also met and worked under Dr. Don Seldin, who, he said, essentially built UT Southwestern into a major medical center. “Dr. Seldin would send medical students off to train in the best places

in the country and then bring them back as faculty. One example was one of my attendings, Joe Goldstein, who later won a Nobel Prize. Dr. Seldin’s commitment to academic medicine and translational research was infectious. Suffice it to say, I could write a book about my internship and residency experiences,” said Dr. Glodé.

During the Vietnam War, there was a compulsory draft of American physicians. One of the few alternatives to service in Vietnam was a position in the U.S. Public Health Service. The limited number of such appointments made them highly competitive—especially for doctors who wanted to join the Clinical Associate Program at the National Institutes of Health (NIH) in Bethesda, Maryland. Successful candidates trained there under leading laboratory scientists and provided care to patients at the campus research hospital.

Dr. Glodé remembered: “The Vietnam War was in full swing, and after residency, I was lucky enough to be selected by the NIH, where I worked in an immunology lab and published my first papers. At that time, George Canellos was leading the program until he went to head the medicine department at Dana-Farber, so I interviewed with him and was accepted to their fellowship program. While I was there, I worked in the lab of the late David ­Livingston doing molecular biology research.”

Following fellowship, Dr. Glodé and his wife set about finding an institution they could call their academic home. “We visited half a dozen medical schools, all west of the Mississippi, and for the most part we were offered jobs, but of the institutions interested in us, the University of Colorado (CU) seemed the best fit. “I was the first board-certified oncologist at CU in a two-doctor department, taking care of patients with lung, breast, and colon cancers and even those with bone marrow transplants. We did it all,” he noted.

Dr. Glodé’s continuing interest in molecular biology accelerated during a 1985 research and teaching sabbatical in Finland. “Living out of the country was an eye-opening experience on many levels. While Mimi pursued vaccinology, working with a famous researcher in the field, I worked in a molecular biology lab, which was an exploding field at the time. However, it dawned on me that quite a few oncologists in the United States were suffering a several-year lag in molecular biology knowledge as it pertained to cancer treatment. So, when I got home, I founded a molecular biology course in Aspen sponsored by the American Association for Cancer Research, which endures to this day,” he said. 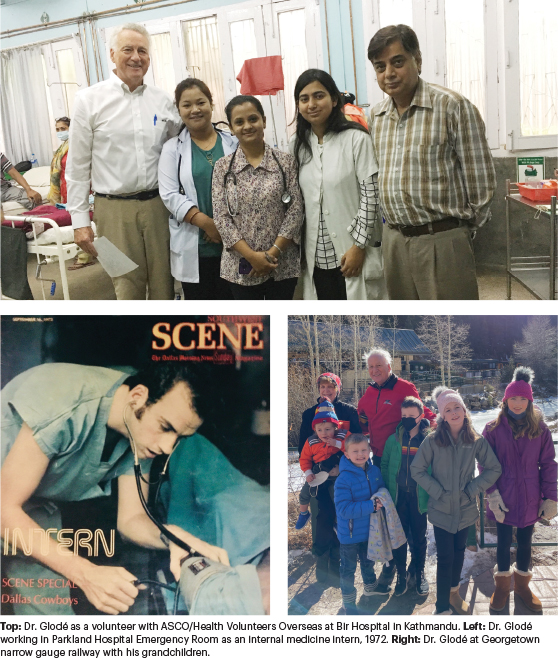 Dr. Glodé continued: “At that same time, given that CU didn’t have a robust research program, I wrote letters to 10 drug companies asking for a clinical trial collaboration. Someone from ­Abbott called about an agent they were working on, so they flew me out to Chicago to discuss putting it into a clinical trial. The agent turned out to be Lupron [leuprolide], a blockbuster prostate cancer drug. I was one of the principal investigators on the trial and saw it through to market. That sort of cemented my career in prostate cancer.”

In 1995, Dr. Glodé chaired ASCO’s Educational Committee and served as the original Editor-in-Chief of ASCO Online. “I saw the Internet revolution unfolding before our eyes and strongly felt ASCO needed to position itself in this emerging space. So, I put together a proposal for building a website to the ASCO board and was given a $100,000 budget to hire a webmaster. I recruited a PhD candidate from Yale who was finishing her doctoral thesis in Medieval studies; she had a picture of herself sitting on Steve Jobs’ couch, so I figured she was well connected. She did a great job, and I think we did the first virtual meeting of any professional society,” said Dr. Glodé. “Being at the forefront of what has become a major component in ASCO’s global presence and work was one of my career’s greatest pleasures.”

Along with improved detection and treatment methods, advances in molecular biology were major developments in prostate cancer during the arc of Dr. Glodé’ career at CU. “Over the course of my career in prostate cancer, I think the past decade has perhaps been the most explosive, due largely to our ability to do molecular profiling of individual patients at different stages of their cancer experience, which in turn greatly enhances the drug development process. I feel blessed to have been part of an incredible medical journey,” said Dr. Glodé.

Toward the end of his career, Dr. Glodé retired as Director for the cancer center’s outreach program. “After identifying the needs, some of the senior faculty would fly and or drive to some of these places and conduct tumor boards. As time went on, these places would eventually develop their own programs, so that was very satisfying. One such place was Vail, and the people there have asked me to manage their patients with prostate cancer. So that’s what I do since full-time retirement about 5 years ago. I see patients on Thursdays and ski on Fridays, which isn’t so bad,” he shared.

What does Dr. Glodé do to decompress? “First off, Colorado was a great place to raise our family. I learned how to ski and fly fish and passed those skills on to my kids, who are now all grown with their own families. Besides playing golf and fly fishing, I do a fair amount of grandkid stuff, which I love.”