Over the past 2 decades, the oncologic mantra “early detection leads to cure” has taken on special meaning in lung cancer, persistently a leading cause of cancer death in the United States. “Over a 25-year period, we’ve seen a revolution in early detection, understanding of tumor biology, and improved surgical techniques in lung cancer. To have been part of that as it unfolded has been enormously exciting,” said Valerie W. Rusch, MD, FACS, Miner Family Chair for Intrathoracic Cancers and Vice Chair for Clinical Research, Department of Surgery at Memorial Sloan Kettering Cancer Center (MSK).

Dr. Rusch was born and raised in Manhattan, New York. Her father, who was of Swiss ancestry, felt it was important to be multilingual and sent Dr. Rusch to the Lycée Français de New York, a bilingual French school in Manhattan. After graduating high school, Dr. Rusch completed her undergraduate and pre-med studies at Vassar College in Poughkeepsie, New York. “My father was a physician, as were several more distant family members, so I had some exposure to the medical field. I also had the opportunity to work for three summers in hospitals, two as an operating room (OR) surgical technician. That sparked my interest in surgery,” said Dr. Rusch.

ON THE MAJOR ADVANCES IN LUNG CANCER

“To me, the transformative event happened in 2004, with the discovery of EGFR mutations, which was made almost simultaneously by three institutions, including MSK. One day, [MSK President and Chief Executive Officer] Dr. Varmus asked if we had any human specimens to test. I said that we did, because it just so happened that I’d been banking lung cancer specimens from my patients since about 1995, because I had sensed that a day would come when we would begin to understand the fundamental biology of lung cancer and need human tissue specimens for translational research. This initial discovery of EGFR driver mutations was paradigm shifting..”

A Brief Flirtation With Europe

During her undergraduate work at Vassar, Dr. Rusch thought about going to medical school in France or Switzerland, where university tuition is supported by the government. “Fortunately, I didn’t go down that path because, in those days, it was even harder for women to enter surgery in Europe than in this country. Though I was inclined towards to medicine, I also had a very strong liberal arts background by virtue of where I went to school and a little bit different perspective than you would have if you went all the way through the American educational system. I thought about doing other things, including going to the Geneva School of Interpreters, for which the entry criteria required fluency in at least three languages (I was fluent in French, German, and Russian). However, somewhat by serendipity, I ended up going to medical school in this country,” said Dr. Rusch.

After a period of indecision, Dr. Rusch was accepted at Columbia University College of Physicians and Surgeons in New York City. “In medical school, I was thinking of going into surgery, simply because of the exposure that I’d had working in the OR during college. I’d liked the combination of technical abilities, cognitive knowledge, decision-making process, and so forth that goes along with surgery. That said, I had a very checkered pathway to ending up in thoracic surgery,” noted Dr. Rusch.

She continued: “Well, as I was going through my surgical training, cardiac surgery was a lot of fun. It’s technically challenging, but it was also, in those days, a more limited field than it is today and relatively repetitive. Moreover, cardiac surgeons were less involved in longitudinal patient care decisions. It’s not that the cardiac surgeons don’t exercise a lot of judgment in the immediate perioperative setting—they do—but it’s extremely different from general thoracic surgery, where you have responsibility for longitudinal care. However, back then, there was no formal training pathway in general thoracic. Everyone went into cardiothoracic; it was a 2-year program with 18 months of cardiac surgery and 6 months of general thoracic. The University of Washington offered me a faculty position to do general thoracic surgery when I finished my training, but I just didn’t feel prepared, so I decided that I wanted to extend my experience in general thoracic before being a faculty member. So, it left me in a bit of a quandary.”

Dr. Rusch recalled one day when she was in the library browsing medical journals and an advertisement in The Annals of Thoracic Surgery caught her eye: MD Anderson Cancer Center (MDACC) was offering a 1-year surgical fellowship. Clifton Mountain, MD, well known for lung cancer staging, was Chief of Thoracic Surgery at MDACC, and one of Dr. Rusch’s colleagues who had trained there  made a phone call on her behalf. “When I got to MD Anderson, Dr. Mountain noted that I’d completed my cardiothoracic training and was board-eligible. Instead of a fellowship, he offered me the 1-year position as a Faculty Associate (Instructor level) with twice the pay!’”

At the time, Dr. Rusch was married to one of her medical school classmates who was an anesthesiologist and was already on the University of Washington faculty. She went to Texas on her own for the 1-year position at MDACC. “It was a spectacular eye-opening experience. MD Anderson was the first exposure that I had to true multidisciplinary cancer care with surgeons, medical oncologists, and radiation oncologists all working together in a single clinic space and having a mini tumor board at the end of the day. I had never been exposed to that kind of multidisciplinary care, so that clinched the deal for me as far as a career in thoracic surgical oncology,” said Dr. Rusch.

After her experience at MDACC, Dr. Rusch returned to the University of Washington, serving as Assistant Professor, then Associated Professor in the Division of Cardiothoracic Surgery. “I had originally wanted to do a blend of cardiac and thoracic and work at the VA medical center, which was the one place you could do both, and also have time for research. But that didn’t match the needs of the University of Washington at the time and, for my first 3 years on faculty, I also covered trauma call. But being up all night on trauma call and then doing a complex oncology case the next day eventually became too much. After 3 years I told the division chief that he could fire me on the spot, but I wasn’t doing it anymore. I also had on the table an offer, by the way, to go back to MDACC at that point,” said Dr. Rusch.

A Mentor in Research

Dr. Rusch’s interest in clinical research was accelerated by a valuable mentor, Robert B. Livingston, MD, who headed the University of Washington’s hematology/oncology section and chaired the Lung Cancer and the Breast Cancer Committees of the Southwest Oncology Group (SWOG) and its Clinical Trials Management Systems Task Force. “Bob Livingston was looking for a surgeon to participate in the Lung Committee and be the leader of surgical components of trials. So, it worked out very well for me. I was appointed to the faculty of Fred Hutchinson Cancer Research Center, and became co–principal investigator for the Seattle group in the Lung Cancer Study Group (LCSG). I got involved in doing clinical trials through SWOG and LCSG. Bob Livingston was really a wonderful mentor. I mean, there was no one in the Department of Surgery who was really functioning in that way at that level in oncology in those days. He was extremely supportive, and with his help I learned how to do clinical trials on the job, basically. It’s a great example of how not all mentors may be found in your own specialty”, said Dr. Rusch.

A career move was in the offing in 1988 when Dr. Rusch received a call from Nael Martini, MD, who was Chief of Thoracic Surgery at Memorial Sloan Kettering Cancer Center in New York City. “Dr. Martini had gotten my name through Bob Ginsberg, MD, who was then Chief of Thoracic Surgery at the University of Toronto. MSK needed another faculty member, and Dr. Ginsberg knew me through LCSG. I interviewed, not knowing that Dr. Martini was ill and ready to step down as Chief. I arrived here in March of 1989 and 6 months later, Bob Ginsberg came to MSK, serving as Chief of Thoracic Service for 10 years before he went back to Toronto. Then I took over. So, it absolutely was not a career that was planned out step-by-step,” said Dr. Rusch. 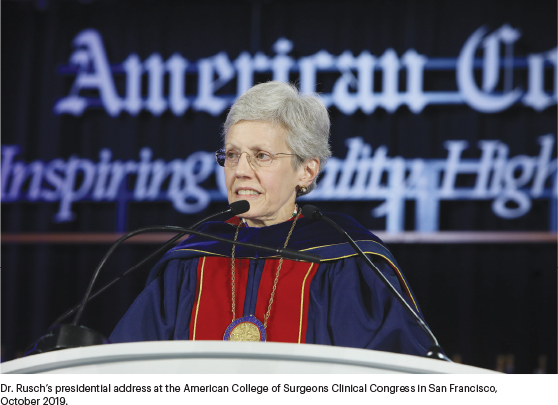 When asked to describe her current work, Dr. Rusch replied: “Well, I still have quite a busy practice. I do clinics on Mondays now. I operate on Tuesdays and Thursdays, and then Wednesdays and Fridays are devoted to research and administration. As Vice Chair for Clinical Research in the Department of Surgery, I oversee our Protocol Review Committee. I serve as Co-Chair of our institutional Research Council, which is responsible for the scientific review of all clinical trials. We also have a Faculty Research Award to encourage young and mid-career faculty and support their clinical research efforts. I oversee a summer course for residents and fellows that focuses on methods of clinical research, and I do a fair bit of mentoring of younger faculty members,” said Dr Rusch. “I am engaged in quite a few clinical research projects, and also do a lot of work with the American College of Surgeons because of my past career there.” Dr. Rusch is Immediate Past President of the American College of Surgeons (ACS), the world’s largest surgical organization.

Along with her challenging schedule, Dr. Rusch somehow finds time to pursue global outreach efforts. “Within the ACS, I am currently involved in helping them to develop training in surgical specialties in Sub-Saharan Africa. We are developing three educational hubs: one in Ethiopia, one in Zambia (expected to go live next year), and the one that I am most intimately involved, in Kigali, Rwanda. In collaboration with the Rwandan Ministry of Health, we are collaborating on developing surgical training programs in cardiothoracic surgery, plastic surgery, and trauma and critical care. It’s challenging, but extremely rewarding work,” said Dr. Rusch.

Major Advances Over Her Career

Over the arc of her career, Dr. Rusch has witnessed paradigm-shifting changes in the treatment of lung cancer, such as the demonstration that neoadjuvant platinum-based chemotherapy was appropriate treatment for stage IIIA lung cancer, starting in the 1980’s. “But I think that, the transformative event happened in 2004, with the discovery of EGFR mutations, which was made almost simultaneously by three institutions, including MSK. Harold Varmus, MD, then MSK President and Chief Executive Officer became very interested in lung cancer because of the emerging science around EGFR mutations and the therapeutic implications. We started having research meetings and, one day, Dr. Varmus asked if we had any human specimens to test. I said that we did, because it just so happened that I’d been banking lung cancer specimens from my patients since about 1995, because I sensed the day would come when we would need such specimens to investigate tumor biology. It was a huge turning point: on one side, we had computed tomography lung cancer screening, which changed the patient population, and on the other end, we had the molecular revolution, which changed what we could do,” said Dr. Rusch.

How does a busy oncology leader decompress? “Well, I love classical music. I don’t play an instrument any longer, but growing up, I played the piano, then the classical guitar, and then the organ. Pre-COVID, I really enjoyed traveling a lot, something that will hopefully be available soon. I enjoy the theater and opera in New York And I garden, which to me is very mentally soothing.”