A Junior High School Teacher Sparks a Love for Science

Peter Marks, MD, PhD, Director of the U.S. Food and Drug Administration (FDA)’s Center for Biologics Evaluation and Research (CBER), was born in Brooklyn, New York, near Sheepshead Bay—an area named for the Sheepshead, a fish that can no longer be found in the waters that frame the neighborhood. “As a young kid, I had very fond memories of the famous Coney Island amusement park.

When I was in my early teens, just starting junior high school, my family moved to Manhattan. Actually, it was my seventh-grade earth science teacher who got me hooked on science. I clearly remember one of his lab projects, in which he distilled crude oil into various products. Watching that stepwise chemical separation process planted the science bug in me, and it grew from there,” recalled Dr. Marks.

Director, Center for Biologics Evaluation and Research at the U.S. Food and Drug Administration

ON THE VALUE OF MENTORSHIP

“I had incredible mentors such as Frank Bunn, MD, Lawrence Shulman, MD, and George Canellos, MD, at Dana-Farber, to name but a few. Their mentorship went beyond clinical advice, deep into what it meant to be a doctor, especially an oncologist. They showed through example what treating the whole patient is truly about.”

As a New Yorker, Dr. Marks didn’t have to travel far from home to find a good undergraduate program—he attended Columbia University. “It was an interesting time, during which old-fashioned biochemistry was transitioning into molecular biology. While at Columbia, I volunteered in the radioimmunoassay lab at St. Luke’s Roosevelt Hospital, later Mount Sinai St. Luke’s, but I also had a paying clinical job doing morning labs at the hospital. It was that personal exposure to patients that motivated a career change. Instead of going to graduate school, I went to medical school at New York University [NYU],” said Dr. Marks.

The doctor offered an interesting sidebar about his serendipitous journey into a career as a physician-scientist. “Before starting medical school, I took advantage of an NYU summer program that introduced students to lab work. It turned out to be a better opportunity than I’d expected. I was accepted into the lab of Frederick Maxfield, PhD, who turned out to be an incredible mentor. His research at the time focused on endocytosis, essentially how cells eat and drink. During that summer, I became fascinated with combining lab science and clinical medicine into a career. ”

He was subsequently accepted into the National Institutes of Health–funded Medical Scientist Training Program for upcoming physician-scientists. “After being accepted into NYU’s medical sciences training program, I stayed on in Dr. Maxfield’s lab, working on single-cell calcium imaging,” said Dr. Marks. “Ultimately, the model system for the motile cells I used were human neutrophils, which are among the fastest migrating cells in the body. That work led me into hematology, which ultimately set me on a path to an internal medicine residency at Brigham and Women’s Hospital, where I remained for my hematology/oncology fellowship,” said Dr. Marks.

Dr. Marks continued: “My years at Brigham and Women’s were some of the most fulfilling of my life. First, I had incredible mentors such as Frank Bunn, MD; Lawrence Shulman, MD; and George Canellos, MD, at Dana-Farber, to name but a few. Their mentorship went beyond clinical advice, deep into what it meant to be a doctor, especially an oncologist. They showed through example what treating the whole patient is truly about. They were great clinicians who delivered compassionate, individualized care. The Brigham also gave me a great opportunity to continue my research in cell motility, which was building on my graduate work. At the time, Tom Stossel, MD, and his group had moved to the Brigham from Mass General, so I got to work in his laboratory in the group with David ­Kwiatkowski, MD, PhD.”

We’ve seen three [COVID-19] vaccines from inception to deployment in about a year, which has been both breathtaking and exhilarating—as well as exhausting, but certainly in a good way.
— Peter Marks, MD, PhD

During his time at Brigham and Women’s Hospital, Dr. Marks received a K08 clinical investigator award and served on faculty as an instructor. Although his career in Boston was building momentum, other considerations factored into a career move. “Quite frankly, my wife and I had two children, and my challenging schedule at the Brigham didn’t afford me enough time for my family. So, I accepted an offer in the pharmaceutical industry, which turned out to be another productive opportunity. I was eventually involved in the process of getting the first oral iron chelator approved for use in the United States. Plus, I helped set the direction for two more oncology products, one to treat neuroendocrine tumors and the other a second-generation BCR-ABL inhibitor,” said Dr. Marks.

Despite his success in industry, Dr. Marks’ latent idealism surfaced, drawing him back into academic medicine at Yale University. “After several exciting years in industry, working to bring new cancer drugs to market, I returned to academic medicine, teaching and building up the leukemia service at Yale University. I ultimately served as Chief Clinical Officer at the new Smilow Cancer Center, which was both a very challenging and rewarding experience,” he noted.

When asked why he left Yale for the FDA, Dr. Marks replied: “I was at Smilow, very busy, totally enjoying the work, but one day I happened upon an advertisement in The New England Journal of Medicine for the position of Deputy Director of the FDA’s CBER. From my time in industry, I’d become familiar with CBER, and the job description seemed to match up nicely with my training and experience, so I applied. I didn’t expect much to happen, and that’s exactly what occurred. I got busy with other work and practically forgot that I had applied. Actually, nothing happened for many months, which isn’t surprising in the government sector. Then I received an invitation to interview for the position, another process that went on for months. Ultimately, I was offered the job and arrived here in January 2012. I assumed the role of CBER Director in 2016, and I say without reservation, it turned out to be a great career move.”

Dr. Marks explained that CBER regulates and does research on complex biologic products that touch people’s lives on a daily basis. “Our work at CBER regulates three main categories of products: vaccines; blood products; and cells, tissues, and gene therapies. In vaccines, we’re continuing to press forward with the development and authorization of vaccines to prevent COVID-19. At the same time, we’re doing the pharmacovigilance monitoring on these vaccines that is necessary to ensure their safety and effectiveness over the long haul.”

“In the area of blood products, we’re advancing the science that will allow us to have the most equitable blood donor policies. At the same time, we’re advancing technologies for universal pathogen reduction of all blood components, something that could be a real game-changer in blood safety, especially for compromised populations such as people with cancer. Finally, in the area of cells, tissues, and gene therapy, we have become very active in advancing the regulatory policies for the development of T-cell therapies as well as pathways and regulatory policies for the development of individualized gene therapies,” said Dr. Marks.

Looking ahead, Dr. Marks stressed that the unique experience of research within the COVID-19 pandemic has offered insights into a strategic way forward. “We’ve learned a lot about what can be done to expedite development and best practices for interacting with sponsors. We’ve seen three vaccines from inception to deployment in about a year, which has been breathtaking and exhilarating—as well as exhausting, but certainly in a good way,” he said.

Dr. Marks remarked on the valuable collaboration between CBER and the Oncology Center of Excellence (OCE). “At CBER, we greatly value our partnerships with OCE, which has allowed us to leverage the tremendous oncology expertise of Rick Pazdur, MD, and his group at OCE toward the clinical evaluation of our novel therapeutics,” he said.

A Challenging Schedule, a Bright Future, and a Rescue Dog 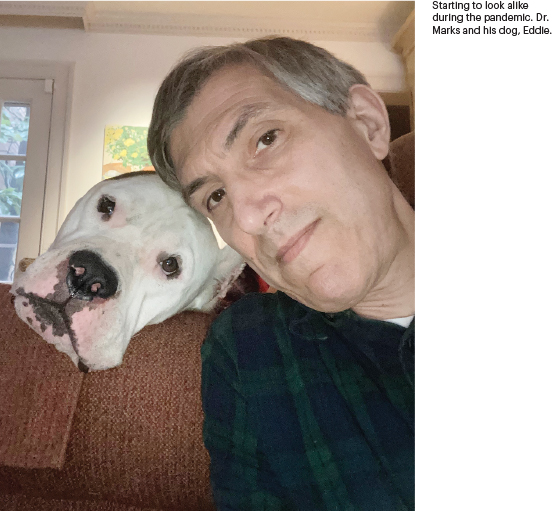 Not surprisingly, Dr. Marks’ schedule is a whirlwind of multitasking. “I spend about one-third of my time on dense administrative duties, organizing a center with about 1,300 employees doing a multiplicity of jobs. Scientific issues relating to product development take up another one-third of my time. The other third of my work is related to policy issues, dealing with the press and other entities from the outside world. Of course, my daily routine is anything but routine and is usually not neatly divided into the three areas I described. Urgent issues arise that take precedence over the schedule. It’s challenging, but at the end of the day, knowing that what is done at CBER benefits the public’s health makes it worth the effort,” he observed.

Dr. Marks predicts a promising future. “We’ve seen over the past decade or so a move from highly toxic therapies to much less-toxic treatments that are delivering far better outcomes than ever. I think this move will continue, especially in our area of cellular therapies, which have great potential in the relapsed/refractory setting. Moreover, I’m confident that cellular therapies will ultimately also play a role earlier on in disease management to eliminate residual disease. So, in my crystal ball, I see a very bright future in hematologic malignancies, but given the rise of genome editing, I also think we’ll see major advances in the treatment of solid tumors with cellular therapies. Not to sound like a Frank Sinatra song, but the best is yet to come.”

What does a super-busy public health expert on the frontlines of the COVID-19 pandemic do to decompress? “The pandemic has taken a toll on all of us, and it is more important than ever to find ways to prevent burnout. First off, my family provides the best respite from career stress. But in the past year, I began studying the Dutch language—don’t ask why Dutch, but it works for me. The other thing that takes me away, literally, is my rescue dog, a Dogo Argentino, which is a very large breed that requires a firm handler and lots of attention. We rescued him during the pandemic, and he has been a big part of my being able to maintain good mental hygiene,” said Dr. Marks.