Although ‘paradigm shifts’ are frequently referenced in oncology, these are really few and far between. They occur when new data either partially invalidate previously accepted theory or are at complete odds with the existing paradigm. Moving away from the Halsted radical mastectomy, a standard of care for 75 years, to breast-conserving procedures was a paradigm shift of enormous scientific and professional struggle.

Norman Wolmark, MD, FACS, FRCSC, was a principal researcher in the seminal trials and follow-up studies that challenged invasive surgical interventions and steered the path toward targeted and preventive therapies for breast cancer. Along with his mentor and colleague Bernard Fisher, MD, Dr. Wolmark’s groundbreaking work transformed the course of breast cancer treatment, cementing his name in the annals of modern medicine.

Dr. Wolmark, currently Professor of Surgery at the University of Pittsburg and Principal Investigator for the National Surgical Adjuvant Breast and Bowel Project (NSABP), was originally interested in biochemistry. The decision to pursue a career in medicine did not come early. “My interest was in biochemistry, and I did not envision pursuing a career in medicine,” shared Dr. Wolmark.

Raised in Montreal, Dr. Wolmark entered McGill University after high school graduation. Founded in 1821, McGill is a public institution in Montreal that Dr. Wolmark called a great place that offered a fine education for almost free, as it was subsidized by the government. “When I first entered McGill, I was enrolled in the school’s ‘honors’ program, still bent on pursuing a career in biochemistry. The school offered an outstanding educational experience so, after getting my undergraduate degree, I stayed at McGill for medical school,” he said.

McGill University Faculty of Medicine was founded nearly 200 years ago, and its alumni include many notable researchers, physician, and clinicians, as well as at least two Nobel Laureates. Even after being accepted to medical school, Dr. Wolmark still had not made up his mind to pursue a career in medicine.

“During that time of indecision, it was my father who suggested I become a physician. My father was a wise man who counseled me on the realities of life. Rather than pursue a career in biochemistry he suggested that I first learn a trade (medicine) and then engage in bench research if I were still interested,” Dr. Wolmark explained.

A Decision to Become a Surgeon

Dr. Wolmark was drawn to the surgical field; however, he noted, McGill did not at the time generally encourage its medical students to pursue a surgical career. Yet, the young student was intrigued by the case-by-case nature of surgery, each patient representing his or her own medical challenge. It was a hands-on discipline in which you had a direct impact on a patient’s life. “Quite early in my residency it became apparent my future would be in surgery,” he said. At this time of his career, he worked with surgeons he described as atypical in their approach to the scientific method. This proved to be a pivotal point in shaping his career, as his interest in clinical trials and research was energized.

After earning his medical degree from McGill and completing his surgical residency, Dr. Wolmark did a research fellowship at the National Cancer Institute and then went to New York City for a clinical fellowship at Memorial Sloan Kettering Cancer Center (MSKCC). At this time of his career, he worked with surgeons he described as atypical in their approach to the scientific method. His time at MSK was a pivotal point in shaping his career, as his interest in clinical trials and research was energized.

“My chief achievement was taking the helm of the NSABP in 1994. We went on to conduct many important practice-changing trials.”
— Norman Wolmark, MD, FACS, FRCSC

In 1973, Dr. Wolmark seized an exciting offer and relocated to Pittsburgh to work on clinical trial development with Dr. Fisher, for what he thought would be a year. Dr. Wolmark conceded that, at first, he wasn’t sure about how things would work out, but he soon was convinced his work with Dr. Fisher would not only challenge the status quo, but also change the standard of care in breast cancer for the better.

A Year Turns Into a Career

“When I joined Bernie Fisher that year, my plan to stay in Pittsburg for a year turned into a career,” Dr. Wolmark noted. “I’ve been lucky to have had several mentors who were invaluable in my career, such as Richard Margolese, MD, who was instrumental in my early training, and my surgical mentor, Mark Ravitch, MD, a compelling academician and scholar who influenced my core approach to medicine.”

However, he added, “without a shadow of a doubt, Bernie Fisher had the biggest effect on my career, for a variety of reasons. First and foremost, he instilled passion in my approach to conducting clinical trials and, of greater importance, he encouraged me to always challenge the status quo, which proved to be the key to making significant advances,” said Dr. Wolmark.

Dr. Wolmark continued: “The work was extremely exciting, in part because back then, we were able to see the data in real time. It was a different world; there were no data monitoring committees, there were no steering synods to interminably review and modify concepts, so we were on our own.”

Dr. Wolmark recalled the seminal NSABP protocol B-04 that examined the question of whether local or regional treatments other than radical mastectomy in nearly 1,200 women with operable breast cancer would result in outcomes similar to radical mastectomy. The initial results were published in 1977 and demonstrated no significant difference in treatment failure or survival among the various treatment groups. “Mainstream surgeons were uncomfortable that we were rocking their boat,” Dr. Wolmark remembered. “We challenged the very basis of surgical dogma in an acrimonious and hostile environment. Yet the retreat from radical mastectomy and the ascent of systemic therapy are inexorably intertwined. In fact, it laid the groundwork for the current era of personalized medicine.”

According to Dr. Wolmark, the largest contribution of the early clinical trials was formulating the standard-of-care utilizing scientific data. It challenged the use of anecdotal retrospective case series and the undue influence of individual surgeons who could dictate how a specific disease should be treated. “We would be subjected to the tyranny of the professorial pulpit, whereby exalted surgeons attempted to convince their colleagues that their outcomes were superior to anybody else’s,” said Dr. Wolmark.

Asked about a career highlight, Dr. Wolmark replied: “Being a part of the work that witnessed the move from the Halsted radical mastectomy to lumpectomy, and eventually to systemic therapies and trastuzumab, and so on is very rewarding. However, I think my chief achievement was taking the helm of the NSABP in 1994, putting it back together after Dr. Fisher was forced to step down. We went on to conduct many important practice-changing trials.” Under Dr. Wolmark’s stewardship, the NSABP broadened its focus to include studies on adjuvant chemotherapy after surgical resection of colorectal cancer and a number of practice-changing breast cancer trials on HER2-directed therapy, sentinel node biopsy to guide breast cancer therapy, and the use of raloxifene as chemoprevention. 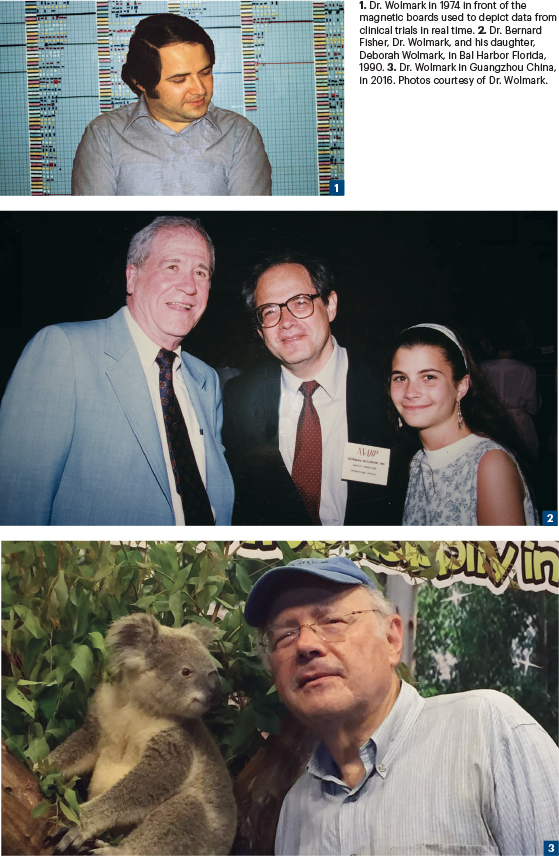 Among his many awards, in 2018, Drs. Wolmark and Fisher received the Society of Surgical Oncology Distinguished Service award for their pioneering work leading the NSABP. Dr. Fisher was in frail health at the time and could not be present at the ceremony. When accepting the award, Dr. Wolmark said: “I must pay tribute to Bernard Fisher, my mentor, my colleague, my friend who could not be here today, and without whom I could not be here today. He convinced me that the randomized prospective clinical trial was not simply to test treatment A vs treatment B; it was to test biologic hypotheses, often mutually exclusive, to move the state of the art forward.”

Although Dr. Wolmark is not thinking about retirement, he realizes that the majority of his accomplishments are in the past. However, he remains passionate about the role clinical trials play in advancing the field of oncology. For that to happen, he said, “we need a new generation of young, eager investigators.” And his advice to them is “Go forth, do better than we did, and we will rejoice in your glory.”