The Revolutions of 1989 that resulted in the end of communist rule in Central and Eastern Europe and beyond began in Poland. Perhaps if not for that social upheaval, the career of internationally renowned oncologist Jacek Jassem, MD, PhD, would have taken a very different path. Dr. Jassem had fled to the Netherlands, and if not for the revolution and the fall of communism, the departure from his homeland could have been permanent. Professor and Head, Department of Oncology and Radiotherapy at the Medical University of Gdańsk, Poland, Dr. Jassem pursues his main scientific interests: lung cancer, breast cancer, combined-modality treatment with chemotherapy and radiation, and molecular oncology.

Dr. Jassem was born on October 21, 1951, in Cracow, Poland, a city that largely escaped the destruction suffered by other Polish cities during WWII. “Cracow is Poland’s most beautiful city, filled with art and culture,” shared Dr. Jassem. “I had a wonderful childhood, spending a lot of time in Cracow. I remember going to the opera with my grandparents. My father was in the Warsaw Uprising during the Second World War, when many thousands of young people were killed. Both of my parents were academics, biology professors who worked in the countryside with crossbreeding of plants to develop stronger strains. So, I had an early exposure to education and science,” he said.

Dr. Jassem graduated from high school at the age of 18, planning to study humanistic sciences; however, shortly after, he decided medicine was his true calling and entered the Medical University of ­Gdańsk in 1969. Unlike in the United States, European students seeking a medical degree do not attend an undergraduate college first; instead, they go straight from high school to the university for 6 years.

“For the first 2 years, you study anatomy, biology, chemistry, physics, and other subjects in the sciences, to give you a solid background before entering 4 years of clinical work,” explained Dr. Jassem. “I gravitated toward oncology in 1975 when I graduated from medical school because I was determined to enter a career that was challenging in science and clinical practice, which oncology certainly is,” he continued.

Fellowship in the Netherlands

After attaining his medical degree, Dr. Jassem did his internship and completed the rest of his oncology training there as well. His first research
interest in oncology was melanoma, and he completed a PhD on “Immunotherapy of Malignant Melanoma with BCG” in 1980. He spent a lot of time in the immunology lab—working mostly at night, as his main work was as a clinician. In 1977, Dr. Jassem undertook training at the Karolinska University in Stockholm, where he met two famous scientists, Professor Jerzy Einhorn and Professor George Klein.

“In the 1980s,” Dr. Jassem revealed, “I was very involved with international studies carried out by the EORTC. There I met Professor Harry Bartelink, who invited me in 1989 to do a 1-year fellowship at the Netherlands Cancer Institute in Amsterdam. I figured it was a great learning opportunity, so I took it and moved with my wife, Ewa, and my two daughters, Joanna and Anna.”

Dr. Jassem continued: “I spent a wonderful and rewarding year in the Netherlands, and Dr. ­Bartelink became one of the most important mentors for my career. My family quickly adapted, and everything went better than I could have expected.”

At the close of his fellowship, Dr. Jassem was given a tempting offer to lead the department of radiotherapy at the one of the leading Dutch universities. The prestigious and well-paid position would be life-changing—for him and his family—but his decision-making was complicated by political turmoil back home in Poland. “The communist system was collapsing, and Poland had its first free election. I decided to return and see how I could take advantage of the new situation in Poland,” he noted.

Dr. Jassem with his grandchildren.

Back Home to a Full Professorship

In 1991, when Dr. Jassem returned to Poland, he was awarded a full professorship at the University of Gdańsk, a position he holds to this day. He then accomplished many international functions, including chairing the ASCO International Affairs Committee and EORTC Breast Cancer Group and serving on the Executive Boards of ESTRO and ESMO. His main scientific interests are lung cancer, breast cancer, combined-modality treatment with chemotherapy and radiation, and molecular oncology.

Dr. Jassem noted his first training in oncology was in radiotherapy, but he later went on to medical oncology as well. “People abroad ask me how it’s possible to do both radiotherapy and medical oncology, and I just say I do my best. However, breast cancer is an example where the two modalities are used in the majority of patients. It’s more difficult if you have one specialist to irradiate the breast and another to administer chemotherapy or endocrine therapy. Here, we can do both in one place, and it is very beneficial,” said Dr. Jassem.

Asked about his current activities, Dr. Jassem replied: “First, I am a clinician taking care of patients with cancer. I’m also Head of the Department of Oncology and Radiotherapy, which is rare to see the two disciplines combined. Naturally, there’s a lot of administrative work with that position. I am also an academic teacher and spend a lot of time with students. My main research area includes biology and clinics of lung cancer.”

Within the past decades, Dr. Jassem’s group has been busy developing novel molecular prognostic and predictive factors to optimize current therapies and prompt new therapeutic strategies, some of which have already been introduced or are being investigated in clinical trials. “Currently, the main research area of my group is biomarkers that may facilitate early detection of lung cancer and optimize postoperative therapy,” he added. “They include assays based on microRNA and proteomics technology. We are now validating our biomarkers, as this is a necessary step in their way into clinical practice.” 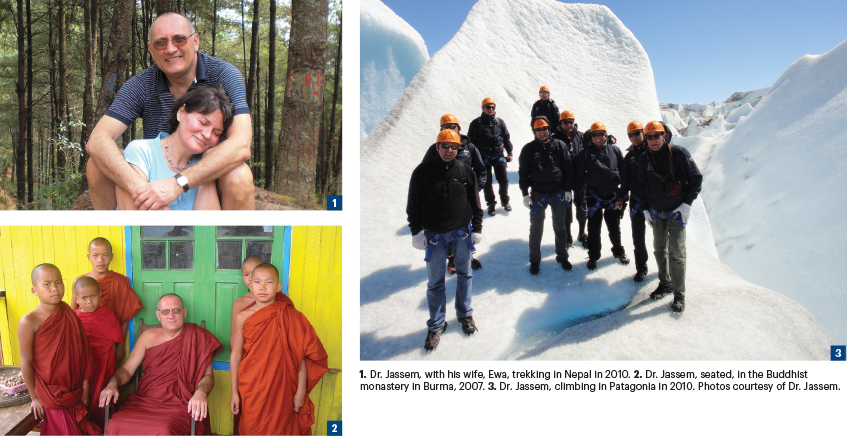 Even as he approaches his retirement, Dr. Jassem is an active sports enthusiast, playing basketball on a regular basis with a team of his colleagues. Throughout his career, he has also traveled the world, seeking adventure and steeping himself in foreign cultures. “Every year, I go on a survival trip to remote parts of the world with a group of male friends. It’s very demanding. We bike, do white-water rafting, canyoneering, hike mountains. We come in close contact with the local people, no matter where we go, sometimes offering them help if we can. We always try to be good citizens of the world. It’s very rewarding. We’d planned trips to Alaska and Ethiopia this year, but given the current situation, it does not look like they will happen.”

Dr. Jassem’s younger daughter Joanna followed in her father’s footsteps and became a doctor. His older daughter Anna is an officer at the European Commission in Brussels, and his son Adam is doing his PhD thesis in econometrics at the Maastrich University in The Netherlands.

“In 2018, Joanna pointed out I had nodules in my neck. I told her they’d been there for a long time without any evidence they were getting larger. She told me they had indeed gotten larger, and my wife Ewa, who is a chest physician, prompted me to take action. So, I went to our surgery department and had a biopsy. Sure enough, I was diagnosed with advanced lymphoma. I underwent aggressive multidrug chemotherapy. It was tough, but I remained working on a shortened schedule,” said Dr. Jassem.

Ever the workhorse, Dr. Jassem wrote a book detailing his battle with cancer. “The reason I wrote the book in the first place was to answer the countless questions I got from friends asking about how I dealt with cancer, physically and emotionally. It was difficult to give satisfactory answers, so I wrote them out in daily notes. One day, a friend said it was a good story for a book. At first, I hesitated, but after I gave a few media interviews, I got a lot of positive feedback from patients, so I finally decided to publish it,” shared Dr. Jassem.

“One message I wanted to give was that if you are unfortunate to develop cancer, do not let the disease dominate your life,” he emphasized. “Exercise, pick up hobbies, just continue to live your life as well as you can. That attitude will help you beat cancer.”