A Nobel Laureate’s Road to Research Is Not Without Challenges

The 2019 Nobel Prize for Physiology and Medicine was jointly awarded to three researchers. Their discoveries paved the way for promising new strategies to treat anemia, cancer, and many other diseases. One of the three Nobel Laureates is William G. Kaelin, Jr, MD, who continues his research at his laboratory at the Dana-Farber Cancer Institute, Boston.

Dr. Kaelin was born on November 23, 1957, in ­Jamaica, Queens. His mother was from Jamaica Estates, Queens, a stone’s throw from the Trump family; a family rumor was afloat that she and her sister babysat Donald when he was a child. Dr. Kaelin’s father was a successful lawyer practicing in Manhattan, and his mother, who he described as a “brilliant woman and valued mentor,” was a stay-at-home-mom (perhaps due to the mores of the times). When Dr. Kaelin was 2 years old, the family moved to Rockville Centre, a village on the south shore of Long Island. He attended St. Agnes Cathedral School until the age of 12, when the family moved to Fairfield Connecticut, where Dr. Kaelin attended public school.

Dr. Kaelin recalled an unfortunate incident that sparked an interest in medicine when he was in second grade. “I was horsing around in my back yard with a few friends and somehow ended up at the bottom of the pile. One of the kids on top corkscrewed my leg, and I heard a loud pop when it snapped. The boys ran off, and I hobbled to the back door.”

He continued: “My mother rushed me to the doctor, and I remember being fascinated with seeing the x-rays. So, that first experience with how medicine worked impressed me, perhaps planting a subliminal seed. And, since I had a cast up to my hip, I was homeschooled by a terrific tutor. I loved the one-on-one stimulation, but when I went back to school, I was so far ahead of my classmates that I felt a bit out of place. Looking back, that incident probably had an effect on how I later approached education.”

Between his junior and senior years at Fairfield Ludlowe High School, Dr. Kaelin’s academic path got a much-needed accelerant. “I was a pretty good student, certainly not stellar. Like most teenaged boys, I had competing social interests but loved mathematics; it came easy to me and I got straight A’s. However, my “Big Bang” moment was in 1973, when our school got a computer terminal linked to a mainframe at Fairfield University, which was new-age stuff for the time. I was taken by the rigor and logic behind the real-world application of computers.”

Dr. Kaelin continued: “One day at the computer terminal, I found a pamphlet in the waste bin advertising a National Science Foundation Program for 32 high school students who might be interested in studying college-level mathematics and computer science over the summer in Florida. I was accepted, and that summer changed my life. I loved being around incredibly smart people. They were the kids sitting at the front of the room, raising their hands, and I was previously one of the kids in the back of the room, making fun of them. When I went home for my senior year in high school, I got straight A’s. And fortunately in those days, you could be a late bloomer and still be accepted to a good college.”

An Offer He Could Not Refuse

Dr. Kaelin’s father was the first college graduate in his family, working multiple jobs to pay for his education at Duke University, where he attained his law degree. He anticipated the fatherly joy of having his eldest son graduate from his alma mater.

“Because of my high scores in mathematics, I was also accepted to MIT. One day I told my father I would rather go to MIT than Duke. He said, ‘Don’t you have to be really good at math to go to MIT?’ When I said yes, he replied, ‘Then I’ll give you a math problem: go to Duke and I pay, go to MIT and you pay,’” said Dr. Kaelin with a laugh.

He continued: “Actually, besides the obvious financial incentive to go to Duke, at the time, computational sciences were in their early development, so I didn’t see the full potential of MIT and didn’t think a life in academic mathematics was a good fit for me. Besides, from a practical standpoint, a career in medicine offered me the opportunity to do something important in the world and to have a good job to support a family. Duke had an excellent medical school, so off I went.”

Dr. Kaelin was flying through his undergraduate work at Duke. During his junior year, an advisor told him that working in a research laboratory would bolster his credentials for medical school.

“I arranged to work in a chemistry lab during the summer between my junior and senior years at Duke,” shared Dr. Kaelin. “The chemistry professor who ran the lab told me the seven undergraduates who had worked on this project had all been accepted to excellent medical schools. That’s all I had to hear: His lab was the golden ticket to medical school. As it turned out, my project was uninteresting, unimportant, and undoable.”

Dr. Kaelin received his grade in the mail via special delivery at his home in Fairfield: C–, which was like the kiss of death for medical school, with a note in the margins: ‘Mr. Kaelin seems to be a bright young man whose future lies outside the laboratory.’ By that time, Dr. Kaelin was already matriculating into Duke University School of Medicine and was convinced that research was not in his future. “My sole quandary was whether I was going to pursue a career in academic medicine or private practice,” he added.

However, during his third year in medical school, Dr. Kaelin was reintroduced to a research lab, which was a better experience than his previous one, although he still wasn’t ready to forgo his future as a clinician for a career in research. “I’d become interested in cancer biology, and the lab project involved measuring tumor blood flow and how it could be manipulated with drugs. I began to learn about the control of angiogenesis, the delivery of red blood cells, and tumor oxygenation—things that later became useful in my work.”

In medical school, Dr. Kaelin began gravitating toward medical oncology due to his fascination with the diagnostic process in multisystem diseases. After earning his medical degree from Duke in 1982, Dr. Kaelin completed his internal medicine residency at Johns Hopkins University in Baltimore and stayed an extra year, as chief medical resident. “People have asked me, if I knew I was going to become a researcher, would I still have stayed on as chief resident? I say absolutely. I learned a lot about medicine and honed my knowledge of rare diseases.” At Johns Hopkins, Dr. Kaelin also met his late wife, Carolyn, who became a renowned breast cancer surgeon in Boston.

Dr. Kaelin went to Dana-Farber Cancer Institute in 1987 as a medical oncology fellow with the intention of becoming a clinical oncologist. After finishing his clinical year, he decided to try the laboratory one more time, expecting to become board certified and eventually to return to the clinic.

“My first research mentor was Shelly Bernstein, MD, PhD, who had just started a lab at Dana-Farber. After about 4 months, Shelly pulled me into his office and said he was shutting down his lab and going into private practice. I figured this was yet another sign I shouldn’t be doing research,” Dr. Kaelin said. Fortunately, he next began working with David M. Livingston, MD, who had just started researching tumor suppressor genes. “Everything was wrong in my first lab, but everything was right in David’s lab. He was a terrific laboratory mentor and the one who taught me how to become a scientist,” he shared.

“Dr. David M. Livingston was a terrific laboratory mentor and the one who taught me how to become a scientist.”
— William G. Kaelin, Jr, MD

Dr. Kaelin said that what he liked best about clinical medicine was arriving at the correct diagnosis, which he likened to solving a puzzle, and then applying an effective therapy. While still a postdoctoral fellow, however, he realized most patients referred to a medical oncologist already have a diagnosis and effective therapies didn’t exist for many of them. It became clear to him that the only path to more effective cancer therapies was to understand the disease better at the molecular level. “Solving puzzles in the laboratory began to provide the same joy I found in solving clinical puzzles,” said Dr. Kaelin.

After 4 intellectually prosperous years with Dr. Livingston, Dr. Kaelin started his own lab down the hall in 1993. “I was trying to figure out a path of investigation; then one day, I picked up an edition of Science that had a piece on the cloning of the von Hippel-Lindau (VHL) gene. From my clinical knowledge of the gene, I thought it offered a great research opportunity to teach us about angiogenesis and hypoxia related to tumorigenesis,” he noted.

Dr. Kaelin’s subsequent investigations revealed that tumor growth in VHL was linked to angiogenic activity. “Essentially, VHL regulates levels of the protein hypoxia-inducible factor (HIF), which can either ratchet up or down the response to low oxygen, triggering angiogenesis and feeding tumor growth,” he explained. Moreover, his later discovery of a molecular switch that renders HIF oxygen-­sensitive was critical to the understanding of how cells react to variations in oxygen levels, opening new pathways for anticancer agents. For this groundbreaking research, Dr. Kaelin and two other physician-scientists—Gregg Semenza, MD, PhD, of Johns Hopkins University, and Sir Peter Ratcliffe, of Oxford University—were awarded the 2019 Nobel Prize for Physiology and Medicine.

Asked to reflect on the Nobel Prize, Dr. Kaelin said: “I’m thrilled to have won the Nobel Prize. The best part is you get to share it with all the people who made it possible: my incredible trainees; colleagues; and, of course, my family. However, I never went into the lab thinking about winning the Nobel Prize. My father loved to fish, and there are a lot of analogies between science and fishing. You have to learn how to do it, where the fish are, and what kind of bait to use. But no matter how good you are, when you drop the baited hook, there’s still a bit of luck involved—just like science.” 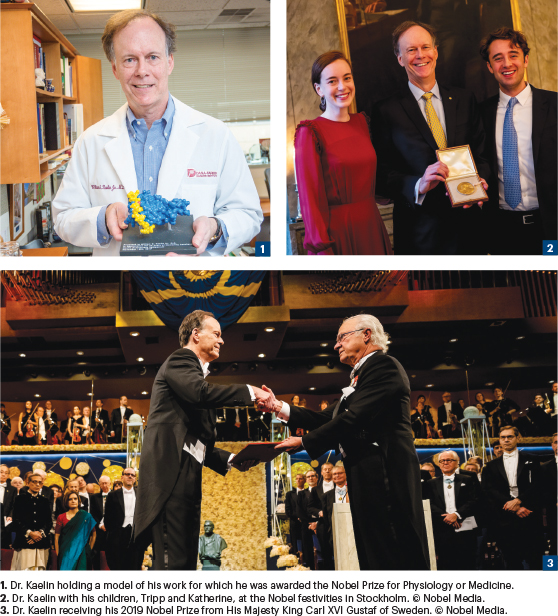 “I am a physician-scientist and go to work every day, walking through the waiting areas at Dana-Farber, which are still very busy because we still have a lot of work to do. When I began working in the early 1990s on VHL, little progress had been made in kidney cancer. We now have a number of new treatments that offer better outcomes for patients with this type of cancer. However, I’m not satisfied with better outcomes. I lost my wife to cancer. So, I’m extremely motivated to be part of the worldwide effort to find a cure for kidney cancer and other malignancies.”

What does a super-busy clinician-scientist do to unwind? “I read and take long walks in Boston. I frequent the theater and the city’s fine dining establishments.”