Breast Cancer Specialist Focuses on Educational Side of Oncology, Connecting Patients With Cancer Around the World

Internationally renowned breast cancer specialist Daniel A. Vorobiof, MD, was born in Santa Fe, Argentina, a province in the northeastern region of the country that is prone to catastrophic flooding. Asked about any early influences in his desire to pursue a career in medicine, Dr. Vorobiof suggested it wasn’t an obvious choice.

“None of my family members were in the medical profession. I went to a business-oriented high school, and no one in my class expressed any interest in medicine. Although there was a good university in Santa Fe, we didn’t have a medical school, so that meant you needed to travel away from home if you wanted to get a medical degree. But when the time came to choose a career path, I didn’t have a head for business and I was good in science, so I decided that medicine was the best career for me.”

Gynaecological Oncology Award from the Department of Gynaecology at the University of the Witwatersrand, Johannesburg, South Africa (2008)

“I studied basic medicine for my first 4 years and then completed 2 years of practical medicine, doing rounds in the clinic. I graduated with my medical degree in 1972, but since it was in the summer amidst the holiday festivities, the medical school was closed, and the administration postponed our graduation ceremony until the beginning of 1973,” said Dr. Vorobiof.

In 1966, the Argentine Revolution erupted and a military coup d’état overthrew the government, beginning years of political turmoil and a succession of military dictatorial governments. “Because of the political disruption in Argentina, my fiancée and I figured it was a good time to get married and travel the world, looking for opportunities. After several months of traveling throughout Europe, we visited friends in Israel. During our conversations, they told me about a new university in southern Israel that had just opened and was looking for doctors to fill specialist departments. So we decided to give it a try,” he said.

Dr. Vorobiof did his internship and residency at Ben-Gurion University of the Negev, which is in Beersheba, one of the most culturally dynamic cities in Israel. “During my internal medicine residency, I had a fantastic mentor—Professor Seymour Glick, a department head who was from Long Island Jewish Hospital in New Hyde Park, New York. He spent personal time with me, giving me a truly deeper understanding of medicine. I recently saw Dr. Glick; he’s well into his 80s and still working,” said Dr. Vorobiof.

Dr. Vorobiof noted that his early days in Israel were not without challenges. It was 1973, and the Arab coalition launched a massive surprise attack on Israel on Yom Kippur, the holiest day in Judaism. 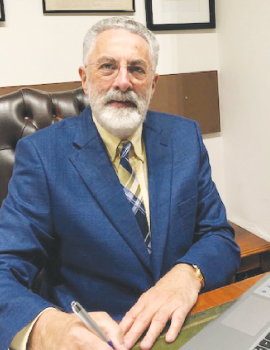 Dr. Vorobiof in his office

“I told my attending that I didn’t know the language and was concerned about working in the hospital at such a dramatic time,” he remembered. “He said that I was needed, and I would learn the language, one way or another. So I went to the hospital, which was understaffed, as many of the doctors had been called into military service. There I was, thrown into surgery and all sorts of emergency care. But many of the other staff spoke enough English to make things run smoothly. It was, however, quite a learning experience for a young doctor.”

It was the 1970s, and cardiology was exploding with exciting new advances. Michael DeBakey, MD, had made the cover of Life magazine after his groundbreaking work in heart transplant. Dr. Vorobiof was unsettled on a specialty, and cardiology piqued his interest.

After a lot of soul-searching, I was drawn to oncology because the patients with cancer were coming to us when nobody else could help them.
— Daniel A. Vorobiof, MD

“But after a lot of soul-searching, I was drawn to oncology because the patients with cancer were coming to us when nobody else could help them,” he said. There were only two oncology departments in all of Israel—one in Jerusalem and one in Haifa. However, the main therapeutic approach was radiation therapy, and I felt that I was better suited for medical oncology.”

He continued: “Ben-Gurion had a strategic relationship with the University of Pretoria in South Africa, and that school was looking for doctors who wanted to do internships in medical oncology. I went to Pretoria to see if it was the right fit for my family and me. I thought it was, so I applied, was accepted and shortly after we moved there. The university had a great oncology department, which was an international member of the Eastern Cooperative Oncology Group. And it offered a lot of research opportunities, mainly in breast cancer,” said Dr. Vorobiof. 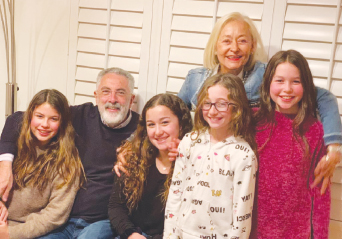 Dr. Vorobiof with his wife, Michal, and his granddaughters 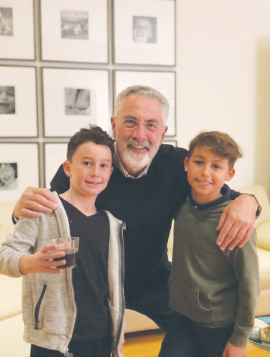 Dr. Vorobiof with his grandsons

He continued, “It was one of the first places in South Africa to offer a medical oncology branch. I had a great mentor in Professor Geoffrey Falkson, and I could not have asked for a better person to help me at the beginning of my career. Of course, there were difficult racial problems in the country. It was 1973, and the struggle against apartheid was coming to a head. I couldn’t do much to help the cause, but I didn’t accept the status quo at the hospital and did certain things that went against the grain of the social norms of the times. Nobody bothered me about it.”

Although Dr. Vorobiof and his wife had originally planned their relocation to Pretoria to last only as long as Dr. Vorobiof’s training, the couple stayed for 9 years. “The hospital was getting very crowded, but for some reason, perhaps financial, the administration did not open or expand the oncology services. So after a discussion with my wife, I decided to open a private medical center in Johannesburg, the nation’s largest and wealthiest city, with a friend who was a radiation oncologist.”

A FEW OF DR. VOROBIOF’S MANY ACCOMPLISHMENTS

Member of the International Affairs Committee of ASCO

Founder and Past Chairman of the South African Melanoma Advisory Board

Founding member and past Director of the South African Oncology Consortium

Past Associate Editor for Annals of Oncology

In 1989, Dr. Vorobiof and two radiation oncologists established the Sandton Oncology Centre near one of Johannesburg’s major hospitals. “It was the busiest time of my life. Ours was the first private oncology center in South Africa. All of our services were under one roof. It was very exciting, but it’s important to remember that in the 1980s, we had a limited amount of drugs available. So we did clinical research on many drugs and combinations such as paclitaxel and carboplatin, and others, to give our patients the best possible outcomes. We were actually part of several international consortia and clinical trial groups. It was a very rewarding time.”

Dr. Vorobiof continued: “After our practice was fully established, I twice was elected Chairman of the South African Society of Medical Oncology. I also chaired other societies and founded and chaired the South African Melanoma Advisory Board. During the early 2000s, I became involved with the ASCO International Committee, which had just recently been initiated by the Society. I also became involved with The ASCO Post, and I am on the editorial board of ASCO’s Journal of Global Oncology. The Society does a great job in connecting the worldwide oncology community.”

Asked about his current activities, Dr. Vorobiof said, “Well, my life has changed as I’m approaching 70 years of age. After 45 years of marriage and 2 kids established in California and with 6 grandchildren, we are having the opportunity to visit them more often and for longer periods. The oncology center that I directed for 29 years has expanded to about 12 oncologists along with nurses and other ancillary professionals. I have stopped practicing clinical oncology myself, but I’m confident that the new generation of cancer care specialists at the center will continue the work that I started. I’m focusing my energy on the educational side of oncology, giving lectures, mentoring, and attending conferences, which entails quite a bit of traveling.”

I’ve loved all my experiences in my career in oncology. To me, there is no more rewarding thing than caring for a patient with cancer.
— Daniel A. Vorobiof, MD

Along with his educational activities, Dr. Vorobiof is Chief Medical Officer at Belong, the world’s largest social network for patients, caregivers, and health-care professionals dealing with cancer. “Belong offers interconnected educational guidance, something I like to see as a GPS for patients with cancer around the world. It is a completely free application and a service that operates 24/7,” he said.

“Unfortunately, many patients with cancer are not fully informed about the disease and treatment options. For instance, a patient who had lymphoma in his brain and was being treated with chemotherapy asked me if he had cancer. You would be surprised how many patients with cancer are afraid to ask their oncologists about their disease—or don’t really hear or understand what their oncologist is telling them. That’s where Belong can help,” explained Dr. Vorobiof.

Asked whether he has a personal avenue that helps him decompress from the rigors of his career, Dr. Vorobiof said, “For me, relaxation is doing my paperwork on weekends without a tie! But recently I’ve put two of my long-time interests together—archaeology and the bible—into a field called biblical archaeology. I’m taking a course at the university and doing my own research. It is absolutely fascinating being able to put ancient history and archaeologic findings together in a way that leads to a broader understanding of biblical times. That’s my escape into the past; it’s like doing detective work on the Old Testament.

“But in reality,” he added, “I’ve loved all my experiences in my career in oncology. To me, there is no more rewarding thing than caring for a patient with cancer.” ■