Ahead of the Curve, Breast Cancer Specialist Advocates Prevention Through Exercise and Lifestyle

Dr. Gralow was born in Sanford, Florida, and spent much of her younger years moving up and down both coasts. “My father was a Navy test pilot, and we relocated wherever he was stationed, anywhere you could dock an aircraft carrier. I was the oldest of five girls and was very good in math and science. I often wondered how I could use those interests to help people, and in high school, I think I was in a premed frame of mind, even though I didn’t say it in a formal way,” said Dr. Gralow. She added, “Medicine seemed like the perfect way to combine my interests in science and research into a career.”

After high school, Dr. Gralow went to Stanford University, where she met her future husband. After graduating from Stanford, the young couple decided to take a few years off before going to medical school.

“I was looking for work and was fortunate to get a job working in oncology. My boss was Richard Miller, MD, who was married to Sandra Horning, MD, Past ASCO President. Dr. Miller took me under his wing in his lab and the lab of Dr. Ron Levy, at Stanford. So, just coming out of my undergraduate work, I was taken in as a technician in this incredible research facility, which was making monoclonal antibodies, a new concept at the time. I got to meet some of the patients who would receive these antibodies, and it was that incredibly rich blend of science and patient care that drove my commitment to the field of oncology. I simply couldn’t imagine a more rewarding career,” said Dr. Gralow.

After a Stint in Boston, Back to the West Coast

After leaving the laboratory, Dr. Gralow and her husband entered medical school at the University of Southern California. After receiving her medical degree, Dr. Gralow went to Boston to do an internal medicine internship and residency at Brigham and Women’s Hospital in the Harvard system.

“I promised my husband I’d return to the West Coast for my fellowship and applied to only two places—Stanford and the University of Washington (UW)—which is where I chose. And I’m still here at UW today. It’s a great place, and I immediately felt connected with the culture and supportive environment.”

Dr. Gralow continued: “When I came to UW, I joined the lab of Dr. Mac Cheever, an immunologist and another one of my mentors. I had a choice of three projects, and the one I chose was the oncogene HER2, which in the early 1990s we were just learning about. That early lab work and my subsequent experience in the clinic treating women with breast cancer established the roots of my career in breast cancer.”

“We can make huge strides in reducing the burden of cancer; it simply takes a focused collaborative effort.”
— Julie Gralow, MD, FASCO

Over the past decade, Dr. Gralow’s interests in breast cancer have become more far-reaching, and she has also become Professor of Global Health at the UW School of Medicine. “I still see patients, although my practice has become smaller, as my clinical trial and global oncology work consumes much of my time,” said Dr. Gralow.

Back in 1995, Dr. Gralow noticed that many of her younger patients had completed their primary therapy but still struggled with the aftereffects of treatment and other cancer-related issues. Serendipitously, she and her colleagues were approached by a Danskin spokesperson, Sally Edwards, who said she was organizing a women’s national triathlon series, and one of the cities was Seattle. 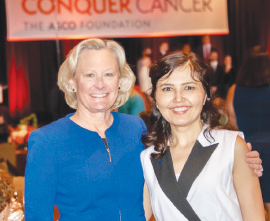 “Sally’s mother died of breast cancer, and she wanted to see if we could get together a team of breast cancer survivors to participate in the event. Danskin would support their training and travel costs. So, we actually did recruit a team of women. This event later helped Sally create Team Survivor training programs in six cities.”

The day before the triathlon, Danskin held a luncheon for the participants and a microphone was passed around so the women could tell why they’d decided to undertake such a tough event. “Many of them said they’d signed up because I’d encouraged them. Inadvertently, the mic was passed to me. When I said I wasn’t participating, the woman next to me, who was my patient and was still on chemotherapy, asked why I wasn’t participating. It put me on the spot, so I signed up, bought swim goggles, and competed along with my patients,” shared Dr. Gralow.

The next day at the finish line, there was an impromptu celebration, during which many of the competitors said they felt so good at having accomplished a triathlon they saw it as an opportunity to build on the experience. Dr. Gralow and two associates, Lisa Talbott, a fitness expert, decided to create a year-round exercise program that would give women with any type of cancer a safe place to recover physically from their treatments and surgeries. Together with the help of dedicated patient advocates and several local cancer centers, they founded the nonprofit organization Team Survivor Northwest. “Along with the incredible physical and mental benefits of exercise, the program gave women with cancer and cancer survivors an organized environment to support each other, which has grown over the past 25 years or so.”

“Along with the incredible physical and mental benefits of exercise, the program [Team Survivor] gave women with breast cancer and survivors an organized environment to support each other.”
— Julie Gralow, MD, FASCO

Dr. Gralow’s work in global cancer health has focused on lifestyle-related issues, such as obesity, which directly increases the risk of breast cancer and produces poorer long-term outcomes for survivors. “I recently gave a talk in Beirut, Lebanon,” noted Dr. Gralow, “at its annual breast cancer conference about the advantages of healthy lifestyles both in reducing the risk of developing breast cancer and the risk of recurrence. I always stress that the development of breast cancer is multifactorial, and even healthy people who do everything right can get the disease. But you can reduce the risks, and that should be emphasized in all public health messaging.”

“We need to achieve a global balance. The majority of women diagnosed with breast cancer in high-income countries have access to the best therapies and with that have a high rate of survival,” explained Dr. Gralow. 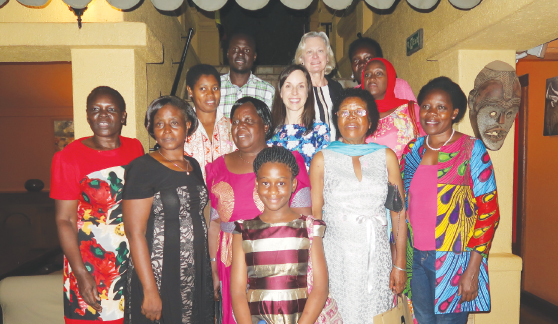 “If we could translate the knowledge we have in high-income countries such as the United States to the rest of the world’s poorer regions, we could make a dramatic impact on the global burden of cancer tomorrow. I’ve collaborated on teaching, clinical care, and research projects with Ugandan colleagues, for instance, and over the years I’ve seen real improvement in cancer care and palliative care. Improvements in cancer outcomes, even with limited resources, have been made there, and I’m proud to have been a part of that effort. We can make huge strides in reducing the burden of cancer; it simply takes a focused collaborative effort.” ■