Internationally renowned breast cancer expert, Larry Norton, MD, FASCO, spent his formative years in a Long Island town that rubbed shoulders with the border of New York City. Making music was Dr. Norton’s first passion and a cheap subway ride landed him in Greenwich Village, the Holy Grail of the exploding music and art scene in the 1960s. Dr. Norton described it as an incredibly interesting time, about breaking boundaries and experimenting with new ideas. To this day, he remains a serious musician, playing several instruments but mostly electric bass and mandolin.

“Music was my passion, and after graduating high school, I thought about staying in New York. But the University of Rochester was a hotbed of musical inventiveness, so off I went,” shared Dr. Norton.

Dr. Norton noted that after about a year at the University of Rochester, he began to question whether a career in music was the right choice. “I didn’t know what else I wanted to do, but I’d always been drawn to science. One afternoon I met a friend, Ron Blum, at the university’s library. I told him about my career quandary, and he said that he’d spent the best summer of his life at the Roswell Park Memorial Institute (now Roswell Park Cancer Institute) working with an inspirational cancer researcher. The word ‘inspirational’ caught me and I hopped a bus to Roswell Park in Buffalo and interviewed with the same researcher, William Regelson, MD, who was a giant in the early days of oncology.”

The Jeffrey A. Gottlieb Memorial Award for Outstanding Achievement in Cancer Therapeutic Research (2008)

Dr. Norton described the summer working with Dr. Regelson as an eye-opening experience that excited his appetite for science. Dr. Regelson then moved to the Medical College of Virginia. Eager for more science, Dr. Norton followed his mentor there the next summer, working as a laboratory assistant and doing rounds.

One day during rounds at Roswell Park, Dr. Regelson told Dr. Norton he wanted to show him something. The event that followed was transformative in Dr. Norton’s career path.

“Dr. Regelson brought me to see a patient who had a pelvic tumor that had erupted through the pelvis up to the skin. It was this huge, horrible-looking, bleeding cancer,” described
Dr. Norton.

Dr. Regelson treated the patient with methotrexate, one of the few options at the time, and Dr. Norton watched the tumor melt away. The patient’s skin healed, and she was discharged and treated at an outpatient facility. “I thought it was the most incredible thing I had ever seen. It was like I saw this monster devouring a woman and a specific medicine was actually making this obviously fatal process go away. Everything about that experience convinced me that I belonged in medicine and not in music. Everything good about the world was in that one case—great science, great clinical thinking, and Dr. Regelson’s intuition. And that was my revelation.”

A Patient at the NCI Sparks a Hypothesis

Dr. Norton received his bachelor’s degree with the highest distinction from the University of Rochester and then entered Columbia University College of Physicians and Surgeons. After attaining his MD, he did his internal medicine training at Albert Einstein College of Medicine and was accepted for a medical fellowship at the National Cancer Institute (NCI).

During his fellowship, another interesting case helped shape his visionary approach to cancer care and his unique clinical identity as a biomathematician. “I had an African patient with Hodgkin lymphoma who had a remarkable response to chemotherapy and was in complete remission for about a year, but then his tumor recurred at the same location with the exact pathology. “We restarted him on mechlorethamine; chlormethine; mustine; nitrogen mustard, vincristine, procarbazine, and prednisone, and he was soon in complete remission. But it puzzled me that such a large mass had gone into complete remission and then recurred,” said Dr. Norton.

He continued: “I tried to graph his tumor size as a function of time and realized that simple exponential kinetics just did not make sense. So, I did some research and came across the work of Anna K. Laird, who had shown that an equation called the Gompertz curve precisely predicted tumor growth in mice. At the NCI, I had access to vast amounts of animal data and modeled them against the Gompertz curve; not only did the tumor growth fit the curve, but a law connected the parameters of the Gompertz equation.”

Nearly 150 years after the British mathematician Benjamin Gompertz developed his law of mortality, Dr. Norton demonstrated that tumors follow Gompertzian patterns in growth; in short, smaller tumors grow faster than larger ones. “My colleague at the NCI, Richard Simon, DSc, and I developed what would become the Norton-Simon hypothesis, which showed that because the rate of tumor shrinkage was proportional to the rate of growth, the most effective treatment plans were ‘dose dense’: frequent administration at tolerable, effective (and not necessarily highest) doses, sometimes best accomplished by using drugs sequentially rather than simultaneously,” said Dr. Norton.

At first, the hypothesis was met with resistance by the oncology community, but Dr. Norton spent decades working on it. “I moved through the system year by year to get people excited enough about the new theory to actually test it. The Norton-Simon hypothesis eventually led to trials of dose-dense chemotherapy that changed our approach to breast cancer. In fact, a recent study in The Lancet analyzed over 37,000 randomized patients,1 confirming the value of this approach,” said Dr. Norton.

In the oncology community, there are no clinicians-researchers whose career contributions are stamped more indelibly to their institution than Dr. Norton and Memorial Sloan Kettering Cancer Center (MSK). 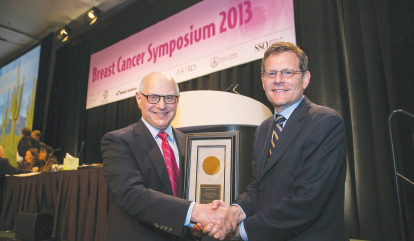 Asked for a then-and-now snapshot of his journey at MSK, Dr. Norton replied: “In comparison to the multisite, multistate behemoth it is now, MSK was a much smaller institution when I joined it in December 1988. All of the clinicians (MDs and RNs) knew each other, and very close bonds were formed. All patients, inpatients and outpatients, were cared for in one place—our main hospital on 68th and York.”

“Physically, and in many ways psychologically, the major change for me was the construction of MSK’s first disconnected outpatient facility: The Evelyn H. Lauder Breast Center on 64th Street. This was as much a concept as a space. Based on Evelyn Lauder’s vision of putting the patient at the center of all activities—rather than arranging facilities for the convenience of doctors—most of the services needed were housed in one place. The first Breast Center was so successful that a decade ago it led to the construction of our current freestanding building, The Evelyn H. Lauder Breast Center and the Breast and Imaging Center on 66th Street. It is much, much more comprehensive. Not only an efficient facility for care and clinical research, it is also warm, nurturing, and always puts the patient first.”

Dr. Norton was quick to point out that no 2 days are alike in his challenging schedule. “At almost 72, I still do patient care, research, administration, teaching, mentoring, writing, and many other activities every day. I am always busy, often being a multitasker and fervent delegator at the same time,” he explained.

Along with what he describes as an “extraordinary team of collaborators,” Dr. Norton’s research activities are still full steam ahead. “I am now working on a digital pathology project seeking a way to connect self-seeding, molecular aberrations in tumor cells and infiltrating leukocytes and tissue geometry. For many grant cycles, I have been the Principal Investigator of an NCI Program Project Grant on Models of Breast Cancer, which is now focused mostly on precision therapeutics and the biology of metastases. I am also involved in an exciting project on cryoablation as an adjuvant to immunotherapy as well as many clinical trials.” 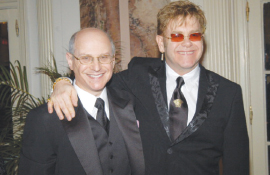 Dr. Larry Norton and Elton John during The Breast Cancer Research Foundation - A Night to Remember at the Waldorf Astoria in New York. (Photo by KMazur/WireImage)

Furthermore, Dr. Norton is the Founding Scientific Director of the Breast Cancer Research Foundation (BCRF), which supports hundreds of high-quality projects. “I feel a sense of emotional connection to all of my work,” Dr. Norton stressed. “My day job is Senior Vice-President in the Office of the President of MSK; as a component of that, I am responsible for the clinical and translational research components of our NCI Cancer Center Support Grant. I am also a husband, father, and grandfather and never forget that! One special thing I do is to play music for at least 15 minutes every day. I’m never without a good book to read, and my wife and I hike or ski pretty much every weekend when I am not traveling for work.”

Is leading an active out-of-work life the antidote to physician burnout? “It certainly is for me, but I can’t speak for others. Even though this is a widespread and serious issue, dealing with the stress of a busy and challenging career is a personal decision. And it’s not just physicians; it’s nurses and all the other hard-working people in today’s health-care system.”

Although Dr. Norton does not have a solution to physician burnout, he thinks a major cause may be documentation. “The digital revolution has helped medicine in many ways, but it is also interfering with traditional and important doctor/patient communication. Studies have shown that up to one-third of the time in which patients ask a question, their oncologist looks up at a screen. I do clinic 1 day a week and usually finish seeing my patients around 7:00 PM at night, and I’m here until midnight entering notes. That’s simply too much.”

“The digital revolution has helped medicine in many ways, but it is also interfering with traditional and important doctor/patient communication.”
— Larry Norton, MD, FASCO

He continued: “I had lunch with someone who is virtually on the edge of burnout, and we talked about the importance of music in my life. I don’t see myself just as a doctor or a researcher; I’m a bunch of different people wrapped into one body, and each one balances the other. It’s very easy to let yourself get consumed by patient care, but if you let that happen, it’s going to impair your ability to be the best doctor possible.”

As a former ASCO President, Dr. Norton noted with pride that under current leadership, the Society has never been better, stronger, or more important in the cancer care and research world. “It has been a great pleasure to see ASCO grow and flourish since my days in formal leadership roles. The facts are clear: research has never been more productive; opportunities in diagnosis, prognostication, treatment, and even prevention are at an all-time high and rapidly expanding; and the enthusiasm of young health-care professionals is heart-warming and contagious.”

He continued: “Academia, practice, and industry are all plugging away! The challenge now, as always, is to connect the dots to value, quality, affordability, and accessibility for everyone. What is the most important part of this enterprise? It is like an airplane: not only do all the parts work, but they work well together. And that goes for ASCO, the American Association for Cancer Research, foundations such as the Breast Cancer Research Foundation, and all other professional and lay groups so dedicated to the cause. It is a great challenge, but we are up to the task.” ■