Valued Mentors and a Link Between Science and Medicine Paved the Road to Oncology for Alice Tsang Shaw, MD, PhD

Lung cancer expert Alice Tsang Shaw, MD, PhD, was born and reared in Gaithersburg, a small suburb located to the northwest of Washington, DC. Both her parents were chemists, and during high school, Dr. Shaw had a keen interest in science, particularly biology, yet the thought of pursuing a career in medicine had not yet been formed. After graduating high school, Dr. Shaw, a top student, entered Harvard College, in Cambridge, Massachusetts, majoring in biochemistry.

“During college, I had my first exposure to medicine when I volunteered at Mass General. It soon became clear from my course work in biochemistry and my volunteer work at the hospital that the best way to make advances in clinical medicine is through research. So I decided to pursue an MD and a PhD. During my senior year at Harvard College, I applied for joint programs and was accepted to Harvard Medical School,” said Dr. Shaw.

Asked what motivating factors led to her decision during medical school to become an oncology specialist, Dr. Shaw responded: “I was in a joint Harvard Medical School–Massachusetts Institute of Technology (HMS-MIT) program, and one of our core classes was on the genetic basis of human disease. At that time, Dr. David Housman, who was the Ludwig Professor of Biology at MIT, was the director of the course. It was a very powerful course, because it was the first time I actually saw the direct link between basic science and medicine.”

Meeting a Patient With Cancer

Dr. Shaw noted that course instructors invited patients with cancer to speak with the students, and this experience fueled her decision to pursue oncology. “One patient who stands out in my mind was a young woman who had been recently diagnosed with chronic myeloid leukemia (CML). At that time, we were just beginning to unravel the molecular basis of blood disorders such as CML. Researchers had identified the key oncogene in CML, BCR-ABL, but had not yet translated that knowledge from the lab to the clinic. For me, interacting with a patient intensified the desire to be part of a research community that would eventually develop life-saving cancer drugs,” said Dr. Shaw.

“I decided to pursue a translational research career, so I could be in a position to help bridge the gap between science and medicine.”
— Alice Tsang Shaw, MD, PhD

Between her second and third years of medical school, Dr. Shaw took time to obtain her PhD. She completed the requisite coursework and then went to work with Stuart Orkin, MD, at Boston Children’s Hospital, where she studied basic aspects of hematopoiesis and elucidated molecular factors governing the development of different types of blood cells.

“I worked in Dr. Orkin’s lab for about 4 years and obtained my PhD in genetics while there. I returned to medical school, where another formative experience took place during my fourth year when I did a month-long rotation on the leukemia service at Brigham and Women’s Hospital. It was an amazing experience for me. Just around that time, some of the newest cutting-edge compounds that truly changed oncology outcomes were just trickling into the clinic, so it was a very exciting time,” said Dr. Shaw.

After attaining her medical degree from Harvard Medical School in 1999, Dr. Shaw entered the residency program at Massachusetts General Hospital (MGH), where she credits Thomas J. Lynch, MD, Chief of Thoracic Oncology, as a mentor who helped shape her career. “Dr. Lynch truly inspired me to pursue lung cancer as my specialty,” said Dr. Shaw. After completing her residency, Dr. Shaw was accepted into a medical oncology fellowship at Dana-Farber/MGH, which she completed in 2005.

“For me [as a medical student], interacting with a patient intensified the desire to be part of a research community that would eventually develop life-saving cancer drugs.”
— Alice Tsang Shaw, MD, PhD

“During my senior year of fellowship, I then did my postdoctoral work with at Tyler Jacks, PhD, at MIT, where I spent 5 years studying lung cancer biology and using mouse models,with a particular focus on the KRAS oncogene. Dr. Jacks was Dr. Shaw’s other major mentor who provided critical guidance in the lab as well as career advice. “During that time, between 2002 and 2007, all of these amazing discoveries were unfolding in lung cancer. For example, epidermal growth factor receptor (EGFR) mutations were discovered in 2004—the first molecular target in lung cancer and one already linked to a drug we already had in the clinic. Once again, it fortified my interest to integrate the discoveries in basic science into the clinic to help our patients,” said Dr. Shaw.

After finishing her postdoctoral lab work, Dr. Shaw had a tough career decision to make. “After finishing a postdoc in basic research, most people will go on to a career running a lab, becoming a lab investigator. I’d heard about in the clinic, I changed course and decided to pursue a translational research career, so I could be in a position to help bridge the gap between science and medicine.

2007, Dr. Shaw joined the faculty in the Center for Thoracic Cancers at MGH. “Right after I started at MGH, we were fortunate in that the second molecular target in lung cancer was discovered by a team in Japan, ALK [anaplastic lymphoma kinase], which I have worked on for the past 10 years. It was really exhilarating to all of us to have a new target in lung cancer, and it was perfect timing for me.” 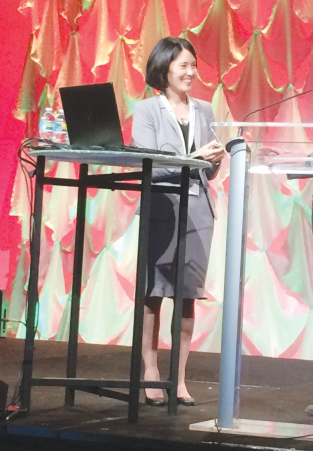 Wearer of Many Hats

Asked to offer a window into her daily work routine, Dr. Shaw replied: “I might start my day with a teleconference to discuss a clinical trial we are running or planning. I then may see patients in the clinic, many of whom are participating in clinical trials of investigational agents. We often have a noontime teaching conference for our fellows, where we review cases and the latest literature supporting clinical practices. After that, I may see new patients or round on inpatients who are admitted to the hospital. Throughout the afternoon there are usually meetings and teleconferences to discuss research with internal and external collaborators. At the end of a long day, I’ll catch up on emails and return phone calls. A portion of the evenings are often spent writing or reviewing papers and preparing presentations.”

‘Many More Breakthroughs to Come’ 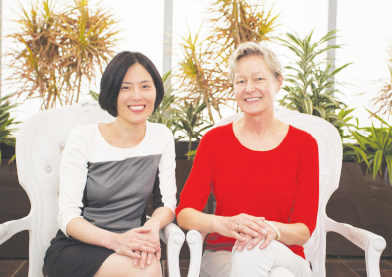 Dr. Shaw with her patient, Linnea Olson, at a lung cancer advocacy/educational meeting

Despite major advances, lung cancer remains one of oncology’s most challenging diseases; however, Dr. Shaw is teeming with optimism. “The past decade has witnessed the development of so many new and effective treatments for lung cancer. We now understand that lung cancer is a not a single disease but is comprised of many different subtypes. These subtypes of lung cancer are driven by specific oncogenes which in many cases can be “turned off” by small molecule inhibitors. These targeted therapies have transformed the care of patients with oncogene-driven lung cancer. And the discovery of immunotherapies for lung cancer within the past 5 years has also been transformative, so it is truly an exciting time to be in the field. There have already been major breakthroughs, and I believe we are on the verge of many more breakthroughs to come.”

In addition to caring for patients with lung cancer, Dr. Shaw also performs clinical and translational research. Her clinical research focuses on a variety of different oncogene-driven lung cancers, including ALK- and ROS1-positive lung cancers. Her translational research focuses on elucidating mechanisms of resistance to targeted therapies. Based on her research, she has helped to develop numerous U.S. Food and Drug Administration-approved targeted therapies for patients with oncogene-driven lung cancer, including crizotinib (Xalkori), ceritinib (Zykadia), and alectinib (Alecensa). Her current efforts focus on developing novel combinatorial strategies aimed at overcoming drug resistance. 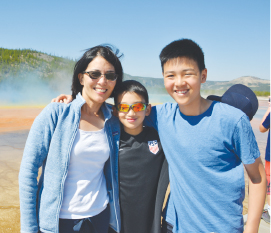 Dr. Shaw with her sons at Yellowstone National Park

In closing, what does a super-busy clinician-researcher do to decompress? “To relax, I love to bake and do home renovation projects. I also have a super-busy husband and two busy teenage sons, and we decompress together on the weekends.” ■