India, with the world’s second-largest population and more than 2,000 ethnic groups, is a vastly complex nation, noted for its rich history and boundless intellectual capital, but also for its poverty and inequities in areas such as access to health care. The State of Kerala, situated in the southernmost region of India on the tropical Malabar Coast, is one of the nation’s success stories, on several fronts, including a number of unique features in health care, which played a large role in the career path and medical philosophy of Narayanankutty Warrier, MD, better known as Dr. NK Warrier, one of India’s most distinguished oncologists.

Dr. Warrier explained that Kerala has a long tradition of Ayurveda, one of the oldest holistic healing systems in the world. The state also boasts a 100% literacy rate, a very low infant mortality rate, and a low maternal mortality rate. “As former U.S. Vice President Al Gore mentioned in his book Earth in the Balance: Ecology and the Human Spirit, the health status of Kerala can be favorably compared with that of France more so than to the rest of India,” said Dr. Warrier.

He noted that although the life expectancy of the people of Kerala is also the highest in India, which is about 75 years, compared with 64 years for the rest of the country, the state also faces unique health issues as compared with the rest of India. “It has been observed that noncommunicable diseases such as heart disease and cancer have emerged as the major causes of mortality in Kerala,” revealed Dr. Warrier.

Dr. Warrier earned his medical degree (MBBS) and internal medicine residency (MD) from Calicut Medical College, Kerala, which is a government-run institution with more than 3,000 beds. He then joined the Adyar National Cancer Institute at Chennai. “It is the oldest nonprofit cancer institute in India, with a rich tradition of helping thousands of poor patients with very advanced cancer but limited means for oncology treatment. “It was at Adyar Cancer Institute that I learned the concept of a comprehensive approach to cancer treatment,” shared Dr. Warrier.

“The idea behind the Drug Bank was simple: No curable patients with cancer should be left untreated for want of money.”
— Narayanakutty Warrier, MD

After his training in oncology at Adyar Cancer Institute, Dr. Warrier returned to Calicut Medical College in 2000. During that time, medical oncology was not a priority of the state government, and the oncology infrastructure was limited in the hospital. A few years later, Dr. Warrier started a cancer survivors group called ‘Pratheeksha,’ which means Hope, in the local dialect. Through Pratheeksha, he initiated several programs such as a large public cancer awareness program for early detection, a tobacco and smoking cessation program, and an educational program focused on lifestyle changes for the prevention of cancer. 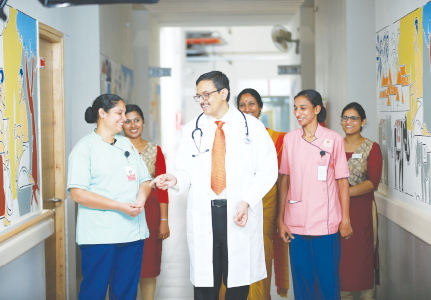 In 2004, Dr. Warrier was selected for ASCO’s International Development and Education Award (IDEA) award. “As part of ASCO’s IDEA award, I visited and learned from the state-of-the-art patient management practices followed in major cancer institutions in the United States, such as MD Anderson Cancer Center, and visionaries in cancer such as Gabriel N. Hortobagyi, MD, and Hagop M. Kantarjian, MD.”

Cost of Care: A Drug Bank

Dr. Warrier stressed that his exposure to the comprehensive multidisciplinary care models at MD Anderson fundamentally changed his understanding of the quality cancer care continuum. Upon his return to Kerala, Dr. Warrier started working on establishing a cancer center in a large private hospital in the state. He eventually founded a comprehensive cancer center, which was accredited by various agencies in India. During this highly productive period, he also established the first bone marrow transplant facility in the north Kerala. Constantly searching to fill unmet cancer care needs, Dr. Warrier started a 24-hour cancer helpline—a telephone counseling program that is still operating successfully to this day.

“As part of ASCO’s IDEA award, I visited and learned from the state-of-the-art patient management practices followed in major cancer institutions in the United States.”
— Narayankutty Warrier, MD

“It became painfully obvious that the costs of cancer treatment very often act as a hindrance to a successful outcome during treatment, so I initiated a ‘Drug Bank’ in 2006 to support economically challenged cancer patients. The idea behind the Drug Bank was simple: No curable cancer patient should be left untreated for want of money. The Drug Bank extends support to thousands of deserving cancer patients who otherwise could not afford treatment,” explained Dr. Warrier.

War on Tobacco and a New Cancer Center

The extremely low price of tobacco products in India makes them widely available to consumers of all ages and income levels, despite laws meant to control tobacco, cigarette smoking, and gutka (a widely used chewable tobacco product). India has the highest prevalence of oral cancer in the world, with 75,000 to 80,000 new cases of such cancers being reported each year. In 2012, Dr. Warrier initiated a mass signature campaign against tobacco products and played a key role in Tobacco Free Kerala, a coalition that led the way to the banning of smokeless tobacco products in the state of Kerala.

Along with Dr. Warrier’s efforts in addressing the high costs of cancer treatment and tobacco cessation, he also became aware of another unmet need in Kerala’s cancer care: lack of clinical research and quality data collection. In 2017, along with like-minded associates, he founded the basis of MVR Cancer Centre & Research Institute, a large 300-bed comprehensive cancer treatment facility with multidisciplinary treatment units in the cooperative sector (run by a nongovernmental group) in Kerala. The hospital is a teaching facility with formal training in various disciplines of cancer care.

Dr. Warrier explained that 30% of cancer treatment costs provided at MVR Cancer Centre & Research Institute are subsidized by CARE Foundation, a charitable trust, and a large research facility is being established, where he plans to conduct scientific studies, combining modern systems of medicine and Ayurveda. “MVR Cancer Centre & Research Institute runs a novel cancer insurance program called the Mass Care Scheme, where a person will get protection up to 500,000 Indian rupees (equivalent to about $7,690), which is sufficient for basic cancer treatment in India against a fixed deposit of 10,000 Indian rupees,” said Dr. Warrier. 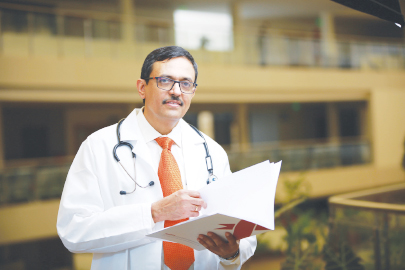 Dr. Warrier is the Medical Director of MVR Cancer Centre & Research Institute where he is engaged in activities such as planning state-of-the-art cancer management of patients and the day-to-day administrative duties of running the hospital. “My long-term vision is transform the institute into an international-level facility in terms of treatment outcomes and clinical research,” said Dr. Warrier.

Dr. Warrier believes cancer care in India is at crossroads, and the biggest challenges are lack of outcome-oriented treatments and access to cancer clinical trials. The quality-of-life issues are also a major challenge in cancer treatment. He believes that with many dedicated cancer centers emerging, there will be healthy competition among the institutions, and these challenges can be surmounted.

Asked to describe an average day, Dr. Warrier replied: “I start about 9:00 AM in the morning with clinical activity, rounding with patients on the wards. I’m also involved in leading various administrative and academic activities at the hospital. It is a lot of work, and I usually put in about 60 hours a week, but things are going well, and I’m proud of the progress we’ve made. I usually unwind on the weekends with one of my hobbies such as photography, travel, and reading.” ■