“At the age of 6, my mother threw me into the arms of Hippocrates’ discipline, giving me as a special gift a toy suitcase full of medical equipment and a little puppet to train my skills with a stethoscope, syringe, thermometer, small reflex hammer, and torch to explore the oropharyngeal airways. Without any doubt, she was the person who awoke my medical vocation. In fact, contrary to my schoolmates, since then I never wanted to become a fireman, a police officer, or even a comic book superhero,” said José R. Germà-Lluch, MD, Professor of Medical Oncology at Institut Català d’Oncologia, Hospitalet de Llobregat, Barcelona, Spain.

Dr. Germà-Lluch was born in Barcelona on September 27, 1949 (the day of the patron saint of medical doctors), and spent most of his childhood in Santa Cruz de Tenerife, one of the two principal capitals of the Canary Islands, an island chain situated about 2,000 miles from the Iberian Peninsula, facing the northeast coast of Africa.

Back to Barcelona and Medical School

At age 15, Dr. Germà-Lluch returned to Barcelona. After finishing high school, he entered the School of Medicine of the University of Barcelona, obtaining his degree in medicine and surgery in June 1973. “Two different but complementary things happened during my time at the University. I became a rugby player and an irregular student, because, I must confess, too many university classes were substituted by hours of direct internal medicine practice at a very old neurology Hospital called El Instituto Neurológico Municipal. There, I learned the principal skills related to the clinical management of patients with chronic diseases, with special attention to the human aspects of the doctor-patient relationship. And while playing rugby, I learned the value of playing as a team. Both practices proved to be transcendental and enriching experiences that left a permanent mark on my life,” he shared.

In his fifth year of medical school, Dr. Germà-Lluch married his girlfriend, whom he had known since they were teenagers. “This also had an enormous impact on my life, because over the next 5 years, our two first boys were born, giving me an extra dose of responsibility that unexpectedly influenced my career selection,” said Dr. Germà-Lluch.

He continued: “In the summer of 1972, I changed my interest from chronic neuromuscular diseases to liver disease, joining one of the best gastroenterology departments in Barcelona located in the Sant Pau Hospital, where I aimed to obtain my specialist degree after earning my MD in 1973. Unfortunately, or perhaps fortunately, there were only private registrar places in that department, which meant I not only lacked any salary but had to pay for the specialty teaching, something impossible for a recently graduated doctor and the head of a growing family.”

A Serendipitous Road to Oncology

While Dr. Germà-Lluch was checking the notice board of Sant Pau Hospital for job opportunities, an oncology position caught his eye. “I must admit, if I hadn’t seen that job post, I might not have pursued a career in oncology. Then I met the person who would become my oncology teacher and very good friend: Pau Viladiu. He told me that if I became a medical oncologist, I would never get bored, and 44 years later, I can subscribe to his prophetic words,” noted Dr. Germà-Lluch.

During his first 3 years as a resident, Dr. Germà-Lluch merged the disciplines of gastroenterology and oncology, becoming a gastrointestinal oncologist, an early pioneer in the field. “In April 1976, I had the honor to be a founding member of the Spanish Medical Oncology Society with another 48 medical oncologists. It’s important to highlight that Spain was the second country in the world after the United States to establish medical oncology as a full specialty,” he noted.

In 1979, after obtaining a grant from the European Clinical Cancer Organisation (ECCO), Dr. Germà-Lluch traveled to Charing Cross Hospital in London to study rare cancers in the esteemed oncology department of Professor Ken Bagshawe. “Working with Dr. Bagshawe, who was perhaps the world’s foremost expert in malignant trophoblastic neoplasms, changed my life and career,” said Dr. Germà-Lluch. “In just a few months, I saw more women with diverse types of trophoblastic disease than I would see throughout the rest of my career.”

“I had the honor to be a founding member of the Spanish Medical Oncology Society with another 48 medical oncologists.”
— José R. Germà-Lluch, MD

Dr. Germà-Lluch explained that Dr. Bagshawe’s team achieved a considerable number of complete remissions with high-dose cisplatin combinations in patients with advanced germ cell testicular tumors. “However, after reviewing the charts of 47 cases of germ cell testicular treated in the past 4 years, I realized my English co-workers had not noted that patients with very high tumor markers at the onset of treatment had a very poor prognosis, despite receiving the platinum-based treatment. In 1980, we published the first paper in the literature highlighting the relevance of high tumor markers in the prognosis of germ cell tumors.”

Dr. Germà-Lluch waited 16 years before an international group finally validated the fact that serum tumor markers have to be measured before beginning systemic treatment and to split patients in three groups with different outcomes. This opened the opportunity to design more aggressive chemotherapy schedules for patients with highly elevated serum levels of alpha-fetoprotein and/or human chorionic gonadotropin. 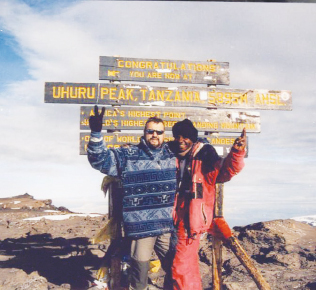 Dr. Germà-Lluch at the summit of Mount Kilimanjaro in 2013

A Visit to a Jewelry Shop

Dr. Germà-Lluch’s efforts to treat genitourinary neoplasms were stalled due to a lack of cisplatin in Spain at the time. However, a trip to a local jewelry store changed his clinical fortune.

“We bought some platinum wire in a jewelry shop and prepared enough cisplatinum to treat two patients with advanced germ cell testicular tumors. I still remember the patient’s chest x-ray after the first cycle of our platinum preparation. Two large lung deposits had almost disappeared, and 37 years later he is alive and cancer-free. A few weeks after treating our two first patients, the Wasserman Laboratory was able to dispense commercial cisplatin regularly,” revealed Dr. Germà-Lluch.

For the next 14 years, Dr. Germà-Lluch’s germ cell tumors clinic treated hundreds of patients from all over Spain, and many young oncologists learned how to manage these very special neoplasms. In 1985, he gained a PhD at Barcelona University, and in 1993 he moved to the Catalan Institute of Oncology, headed by his old teacher and friend Pau Viladiu.

At that time, because I was worried that my medical team was not able to cover all Spanish germ cell cancer patients in 1994, I promoted the foundation of the Spanish Germ-Cell Cancer Group (GG). Over the past 20 years, the GG has increased the number of centers to 89 and has been involved in many worldwide trials and in all 4 international consensus conferences on the management of germ cell tumors.

Head of a Burgeoning Cancer Program

The Catalan Institute of Oncology was designated as a comprehensive cancer center in 1995. “The comprehensive cancer center model adopted by the Catalan Institute of Oncology has enabled it to provide cancer prevention programs, palliative care, research facilities, and specialist training within the same organization—the only center with these characteristics in Spain,” said Dr. Germà-Lluch.

Dr. Germà-Lluch served as Head of the Catalan Institute of Oncology Medical Oncology Department from 1993 to 2014, during which time he promoted the development of interdisciplinary oncologic functional care units to treat the most frequent 11 types of tumors. “In 1997, I initiated the first translational research lab. Since then, the Catalan Institute of Oncology network has been enlarged and includes 4 tertiary and 20 community hospitals all over Catalonia and is a national reference center in uncommon tumors, with special attention to germ cell neoplasms, sarcomas, and neuroendocrine tumors,” he commented.

In 1999, Dr. Germà-Lluch spent 6 months in Bolivia, sponsored by the Spanish Agency for International Cooperation and Doctors Without Borders, to design the first fighting program against cancer in that country. “It was an exceptional opportunity to see first-hand the enormous difficulties oncology providers face in developing nations,” said Dr. Germà-Lluch. 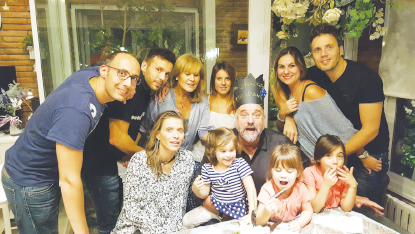 Dr. Germà-Lluch with his family

Optimistic About the Future of Cancer Care

Asked to describe the challenges of the Spanish cancer care system, Dr. Germà-Lluch replied: “Our National Spanish Health Service delivers universal health-care service. However, the main challenge in oncology, as in many countries, is balancing the costs of cancer drugs with their value. I believe academic oncologists should be involved in a concerted effort along with the policy workers and Big Pharma to develop innovative drugs at an equitable price.”

In closing, Dr. Germà-Lluch shared these thoughts: “After more than 40 years in oncology, I foresee a splendid future for cancer care in my country. It is not just a utopic desire; this conviction is based on the quality of our participation in both early and pivotal clinical trials and the incremental collaboration among all oncologic disciplines, the civil society, the pharmaceutical industry, and the health authorities. Since I was very young, I have believed in a simple credo: It is necessary to have large dreams to find them when you wake up!” ■