A Love of Older Patients With Cancer Drives a Career Path for Arti Hurria, MD, FASCO

Arti Hurria, MD, FASCO, who is Director of City of Hope’s Center for Cancer and Aging, is a first generation of immigrant parents from India. “My parents left India and moved from England to Canarsie, Brooklyn, where I was born. When I was 8, my family moved to Southern California, partly due to its more moderate climate. My parents are physicians, and when I was growing up, they were training very hard in the new medical system. So I was brought up in an environment that truly believed in the power of medicine to make a difference in the world, but most importantly in the power of education,” she shared.

A Doctor’s Daughter Gets a Haircut

Asked if there were any early incidents that influenced her decision to follow her parents’ medical footprints, Dr. Hurria recalled a childhood haircut.

“My father had taken me to get my hair cut. It was not at a beauty salon; this was a neighborhood barbershop, with men sitting around talking, and I recall the look of horror on my mother’s face when I came home with the haircut. I also remember my father telling the barber I was going to be a doctor. This was the 1970s, still a time when women were struggling to fill seats in medical schools. The barber just kept cutting and agreed with my father that I was going to become a doctor. And I always thought of my dad as a true feminist; he believed my education could overcome any barrier,” said Dr. Hurria. She added: “But I grew up in a household where all I knew was medicine, so becoming a doctor was sort of an organic process.”

After graduating from high school, instead of taking the traditional pathway from undergraduate to medical school student, Dr. Hurria was accepted to a special 7-year combined medical program at Northwestern University and then Northwestern Medical School.

“Even as we embrace new, exciting drugs and technologies, the time-honored medical tradition of compassion and active listening is the core of what we do.”
— Arti Hurria, MD, FASCO

“You end up doing 3 years of college and 4 years of medical school. I knew I wanted to become a doctor and never questioned that decision, so Northwestern provided a great opportunity to broaden my intellectual horizons. I was a psychology major, which ended up being helpful in the overall process of medicine.”

Dr. Hurria continued: “My mother is a radiation oncologist, and she has a really deep relationship with her patients; that, among other things such as the science, attracted me to the field. At Northwestern, I was a second-year medical student when I met my mentor, Dr. Steve Rosen. One day I went into Dr. Rosen’s office and told him I was thinking about going into oncology. He was very encouraging, and I began shadowing him during his clinic on Tuesdays. From there, I did my internal medicine rotation in oncology and made my firm decision to become an oncologist. Dr. Rosen is a great mentor, who truly influenced my career path. Fortuitously, our paths crossed again 2 decades later, when Dr. Rosen joined City of Hope, and he continues to mentor me today.”

In 1995, Dr. Hurria moved to Boston for her internship at Beth Israel Medical Center.

“Historically, research left out people who were older and more experienced, which doesn’t make much sense. We’re changing that. Older people have much to teach us.”
— Arti Hurria, MD, FASCO

“Beth Israel has a very strong geriatrics program, along with its oncology program, and I absolutely fell in love with that patient population. But I realized there was very little knowledge about how to treat these older patients with cancer with the best standard of care. I was fortunate once again to have great mentors. At that time, there were no dual geriatric-oncology residency programs. You did one, or you did the other. But I asked if I could do a joint residency, and they said yes, because they saw it filled an emerging need,” she explained.

Dr. Hurria also completed a Harvard geriatrics fellowship to bolster her skills and knowledge in treating older patients before entering her oncology fellowship at Memorial Sloan Kettering Cancer Center (MSK). “At Memorial, I was able to bring the field of geriatrics into oncology. It’s important to note that when I began my oncology fellowship, the field of geriatric oncology was just beginning to emerge, so it was truly exciting to be part of it from the ground up,” she commented.

A Grant Sets the Stage

After her fellowship, Dr. Hurria joined the staff at MSK. “I worked on the breast medicine service and learned the intricacies involved in caring for patients with breast cancer. In a very early stage of my career, I was fortunate to be able to write a P20 Grant, which was designed to bring cancer care and aging together in a comprehensive cancer center. I did that with Dr. George Bosl, who was Chair of Medicine at the time.” 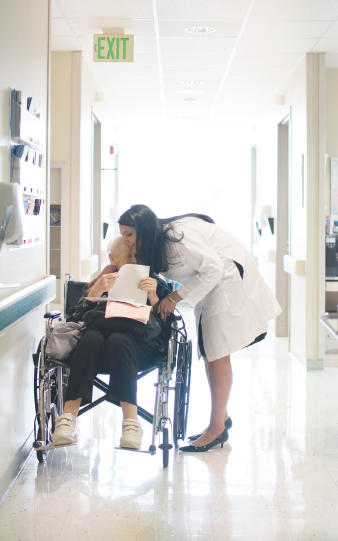 Dr. Hurria with a patient

She continued: “That experience provided me the platform by which I could begin to understand and implement tools for geriatric oncology. Historically, research left out people who were older and more experienced, which doesn’t make much sense. We’re changing that. Older people have much to teach us. Their bodies are different. Their lives are different.”

Dr. Bosl wanted Dr. Hurria to continue her research in geriatric cancer, and although she had decided to accept a position at City of Hope, she believed it provided an opportunity to turn her work at MSK into a multi-institutional project. This aspiration came to fruition when Dr. Hurria became Director of the newly formed Center for Cancer and Aging at City of Hope, where she serves as the principal investigator on grants that will lead to evidence-based recommendations to improve clinical care for older adults with cancer.

“I grew up in a household where all I knew was medicine, so becoming a doctor was sort of an organic process.”
— Arti Hurria, MD, FASCO

“Like so many things, the Center for Cancer and Aging began with a leap of faith: If we could do one center, then two, why not spread this valuable work across a multi-institutional landscape, which is what happened.”

Dr. Hurria pointed out there are fewer than 200 geriatric oncologists, and as a result the health-care workforce receives little geriatric training, even though the older population is the largest demographic. “Sixty percent of all cancers occur in people who are 65 and older. Baby Boomers are turning 65, and today, the largest growth in the population is occurring in people who are over 65. By 2030, the largest growth in the population of adults will be 80 or older. We cannot ignore that,” she urged.

Asked to describe her current professional life, Dr. Hurria responded: “It’s definitely busy. In 2017, I was named City of Hope’s Vice Provost for Clinical Faculty. One of my missions is to increase the diversity of our clinical faculty in recruitment, retention, and advancement. One opportunity that truly helped me grow into this position at City of Hope was serving as Chair of the ASCO Professional Development Committee, where I was able to strategically plan professional development activities for members.” 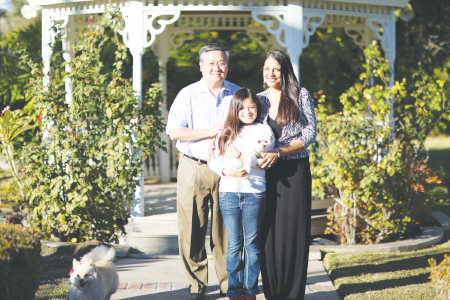 Dr. Hurria with her husband, Dr. Thomas Lee, and their daughter, Serena Lee, and Biscuit 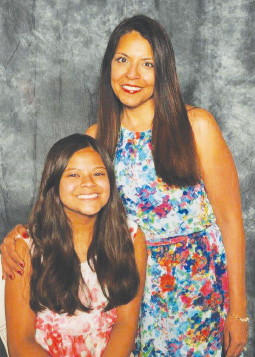 Dr. Hurria recently received a National Institutes of Health grant to help her foster and nurture the next generation of oncologists who seek to pursue a career in geriatric oncology. “I have the honor of hanging out with all of these young, bright mentees who are bursting with enthusiasm about their future in oncology, and it is truly remarkable to be part of their journey. And the best thing I can pass on to them is to always remember the heart of oncology is built on the strength of our relationships with our patients and our colleagues, because they are one in the same. Even as we embrace new, exciting drugs and technologies, the time-honored medical tradition of compassion and active listening is the core of what we do, why we became doctors in the first place.”

When asked about balancing a challenging career and a personal life, Dr. Hurria replied: “I am married and have a 14-year-old daughter, and there has been no greater teacher for me than having a child. It has, in fact, made me a better doctor because it’s taught me patience and enhanced my ability to listen. Once you’re a parent, you are no longer the center of your universe; you have to sacrifice in time and emotion. This is truly my deepest expression of love and the most enriching experience.” ■