The nationally recognized hematologist-oncologist Mojtaba Akhtari, MD, was born and reared in Tehran, Iran. “In my early years, I had a couple of cousins who were medical students. When I visited them in their homes, I was fascinated with the images in their medical text books. I would flip the pages from physiology to anatomy. That was my first introduction to medicine,” said Dr. Akhtari.

During his formative years, a personal medical drama added to his medical interest. “My mother became very ill. We took her from doctor to doctor, but nobody could determine what was wrong.

She had lost strength in her legs as well as bowel and bladder control. Finally, a neurosurgeon by the name of Aliomohammadi diagnosed her with transverse myelitis and admitted her into the hospital,” revealed Dr. Akhtari. “She was treated as an inpatient for about 3 months. She survived, had occupational therapy, and went on to live a normal life.”

He continued: “The way this neurosurgeon treated my mother along with his compassionate and professional bedside manner had a great effect on me. As a young man, I wanted to be someone like him, a person who made a difference in sick people’s lives. I would describe him as ‘the good doctor.’”

After completing high school, Dr. Akhtari submitted the results of the National Exam. After having excellent scores and ranking 99 among 500,000 candidates, he was admitted to Tehran University of Medical Sciences (TUMS). Founded in 1934, TUMS is the most distinguished and highly ranked medical school in Iran. To earn a medical degree in Iran, students must pass a grueling 7-year program.

We’ve moved into the era of immunotherapy, which offers even more hope for our cancer patients. We have a long way to go, but the future is full of hope.
— Mojtaba Akhtari, MD

“Given my respect for my mother’s doctor, I first thought about becoming a neurosurgeon,” admitted Dr. Akhtari. “However, one of my first interactions at medical school was with an oncologist, Dr. Shafaian, who was a faculty at Amiralam University Hospital in Tehran, and I was very impressed by how he related to his cancer patients..”

Asked to describe the oncology ward, Dr. Akhtari shared: “In those days at the University Hospitals in Tehran, cancer patients were treated in large communal wards, which I remember vividly as very sad places. The patients all had a desperate look, as if they were in a concentration camp instead of a hospital. This affected me deeply, and I wanted to be in a position to help these people and their families, improving their quality of life in a way that was meaningful. Thinking about those patients still breaks my heart. So that was probably the most important factor in my decision to pursue a career in oncology.”

During that period, Dr. Akhtari did work that would help form his career path, looking at blood slides and bone marrow aspirations, further fueling his fascination with blood cells and the development of cancers. “Hematologists and oncologists would perform bone marrow aspirations and biopsies, and a couple hours later they had a diagnosis, and we would commence with the appropriate therapy. I recalled my mother’s long suffering before she was formally diagnosed, and here we were doing diagnostic workups in a matter of hours. It was very exciting,” said Dr. Akhtari.

Seeking to expand his learning, Dr. Akhtari relocated to the United Kingdom to train in hematology at Kings College Hospital in London. Referred by staff simply as “Kings,” it is a teaching hospital that serves an inner-city population of about 700,000 people; it also serves as a tertiary referral center in specialties such as cancer to millions of people in southern England.

“My mentor was the head of the hospital’s hematology department, Professor Ghulam Mufti, who like to be called “Prof.” He performed the first bone marrow transplant in the UK. “I spent 4 productive years at Kings. It was a wonderful learning experience that furthered my desire to specialize in leukemia,” said Dr. Akhtari. 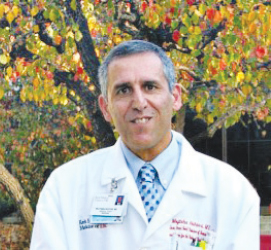 Following his training at Kings College Hospital, Dr. Akhtari took advantage of an opportunity to move to the United States and continue his hematology and oncology training at Emory University in Atlanta. There, he trained under Edmund K. Waller, MD, PhD, Director of the Bone Marrow and Stem Cell Transplant Center at Winship Cancer Institute of Emory University.

“While at Emory, I allocated my research time to stem cell transplantation. I did clinical research and some animal studies predominantly of graft-vs-host disease. This was also a very enlightening experience.”

To Nebraska and Then California

After his experience at Emory University, Dr. Akhtari left the South and headed for Omaha, Nebraska, where he joined the staff of the University of Nebraska Medical Center as Professor of Clinical Medicine. “I had the honor of working with Drs. James Armitage and Julie Vose. The University of Nebraska Medical Center is a center of excellence and a member of the National Comprehensive Cancer Center, just a world-class institution,” revealed Dr. Akhtari.

I lost my grandfather to multiple myeloma at a time when the majority of patients would die in less than 2 years of diagnosis. Now we have excellent targeted therapies for multiple myeloma, which has dramatically changed the natural history of the disease.
— Mojtaba Akhtari, MD

He continued: “I was there for 4 years, and it was an amazing experience. Dr. Armitage was a great mentor, and my work in hematology was extremely productive for my career. Not only were Dr. Armitage and my other colleagues at the University of Nebraska terrific collaborators, they became friends, with whom I still keep in touch. I loved Omaha; the people were genuinely friendly and generous. I still consider it home, and my young daughter wants to return to Omaha when she grows up, so it had a lasting effect on us,” commented Dr. Akhtari.

However, an opportunity arose, and Dr. Akhtari moved with his wife and two children to the University of Southern California (USC). “I currently work at the USC Norris Comprehensive Cancer Center. It is quite a different environment than Omaha; our patient population is extremely diverse, serving a lot of recent immigrants. I see patients with acute leukemia, lymphomas, and multiple myeloma. I’m a member of the Norris stem cell transplant team; we’re a growing program, and our survival data are good. I’m currently collaborating with a few colleagues in which we are accruing outcomes data on patients with acute leukemias who undergo stem cell transplant,” he noted.

Asked to reflect on his early days in Tehran on the cancer ward, Dr. Akhtari replied: “We have seen tremendous advances in the field of hematologic oncology. When I was in medical school, we were treating patients with chronic myeloid leukemia with with oral Busulfan and hydroxyurea, and in 2001 we saw the advent of imatinib on the market, which introduced a new era in blood cancers of targeted therapy.” 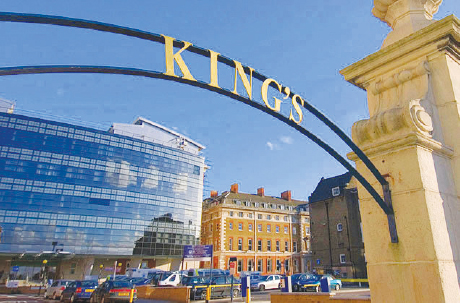 Dr. Akhtari relocated from Tehran, Iran to to the United Kingdom to train in hematology at Kings College Hospital in London. “Kings,” is a teaching hospital that serves an inner-city population of about 700,000 people; it also serves as a tertiary referral center in specialties such as cancer to millions of people in southern England.

“These days, we rarely do transplants for acute myeloid leukemia patients,” admitted Dr. Akhtari. “I lost my grandfather to multiple myeloma at a time when the majority of patients would die in less than 2 years of diagnosis. Now we have excellent targeted therapies for multiple myeloma, which has dramatically changed the natural history of the disease. Other cancers such as breast and colon have also seen remarkable advances in survival outcomes. Now we’ve moved into the era of immunotherapy, which offers even more hope for our cancer patients. We have a long way to go, but the future is full of hope,” predicted Dr. Akhtari.

When he’s not in the clinic or research laboratory, Dr. Akhtari is an avid nature photographer. He is also working on a fascinating book examining the lives of famous world leaders who had cancer, capturing how they dealt with the disease and how it affected their careers. Between his rigorous schedule at Norris Cancer Institute and helping to rear his two young children, finding time to write sometimes proves difficult. “It’s a worthwhile and interesting book, and I plan to finish it,” said Dr. Akhtari. 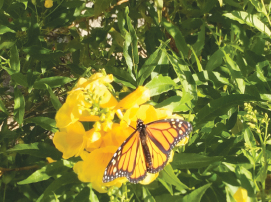 Dr. Akhtari is an avid nature photographer. His photo is shown here.

He has edited two books and authored several book chapters and many articles in peer-reviewed journals. He received the Humanism in Medicine Award at St. Francis Hospital of Evanston, Illinois. He received the Faculty Teaching Award at Keck/USC School of Medicine. He is an active member of ASCO, the American Society of Hematology, and the American Society for Blood and Marrow Transplantation.