NOTABLE HONORS
Co-Chair of the Cancer in the Elderly Working Group, Alliance Cooperative Group (formerly known as the Cancer and Leukemia Group B (1995-present)

Recipient of Susan G. Komen for the Cure Brinker Award for Scientific Distinction in Clinical Research (2012)

Past member of the Board of Directors, American Board of Internal Medicine (2000-2005)

Past Chair of the Subspecialty Board on Medical Oncology, American Board of Internal Medicine (1999-2003)

Hyman Muss, MD, a pioneer in geriatric oncology, considers himself “a real Brooklyn boy.” His father was a dentist, and his uncle was a general practitioner. “They both practiced out of a small brownstone house in Brownsville-Crown Heights. It was sort of reminiscent of the famous movie The Last Angry Man about a crusty old doctor who fought the odds to deliver medicine to everyone. You’d walk in to see my uncle; he’d charge you 3 bucks for the visit. My father and his brother worked 7 days a week,” said Dr. Muss.

Dr. Muss’ uncle, the general practitioner, came from a very poor family. Despite these early hardships, he received a scholarship to go to medical school at Howard University. “When my uncle attained his MD, he returned to Brooklyn to practice medicine. In those days, doctor’s cars had MD plates, and you could park anywhere, like a diplomat. My uncle took me on house calls with him. It was fascinating, and I really enjoyed the experience, seeing the reward he got out of delivering medical care. Although I wasn’t sure about my career when I was in college, I’d often think about my uncle, and I’m sure those memories played a part in my decision to become a doctor,” shared Dr. Muss.

Tour of Duty in Vietnam

Dr. Muss received his medical degree in 1968, during the height of the Vietnam War, when the U.S. military was hungry for troops, escalating the draft. “As medical students, there was a military program called the Berry Plan, which allowed physicians like me to choose among one of three options: enter the armed services right after internship and return to residency afterward; enter the services 2 years after medical school and complete medical residencies after service; or enter the service after completion of residency training. I was drafted, so after my year of internal medicine residency, I signed up with Uncle Sam. I had some experience in cardiology and had a good friend in cardiology at the National Institutes of Health, so I applied there. I was probably the only applicant without an MD-PhD, and there was only one slot, so I knew I was going to Vietnam,” revealed Dr. Muss.

Despite the controversy surrounding the war, I decided to serve in Vietnam. Truth be told, it was an extremely valuable growing experience in my life.
— Hyman Muss, MD

The army offered Dr. Muss a 3-year tour of duty if he stayed in the United States, but his attitude was “just do it.” His uncle landed on the beachhead in France during World War II, and his father served during World War I. “I came from a family of immigrants who did very well here and were thankful for the opportunity they were given, so despite the controversy surrounding the war, I decided to serve in Vietnam. Truth be told, it was an extremely valuable growing experience in my life,” he added.

He was a doctor assigned to an artillery unit. “I was 27 years old, a captain, the fourth-highest ranking officer in a battalion of 500 soldiers. I met a lot of fine people and developed a respect for our military heritage. Fortunately, we didn’t have too many casualties during my 1-year tour,” Dr. Muss stated.

In 1972, after his military service, Dr. Muss entered Brigham and Women’s Hospital in Boston for hematology and then oncology training. I immediately fell in love with hematology and was fortunate enough to have a great mentor, Bill Moloney, MD, one of the nation’s first blood cancer specialists. He was Head of the Hematology Department and Professor at Harvard and a terrific down-to-earth guy. I loved rounding with him, and that experience was instrumental in my decision to become an oncologist,” said Dr. Muss. 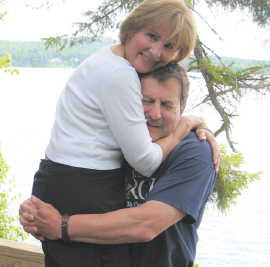 Dr. Muss with his wife, Loretta

Dr. Muss did his oncology fellowship at Dana-Farber Cancer Institute. “I was lucky enough to have Emil ‘Tom’ Frei III, MD, as one of my professors, and he was an inspirational guy. The minute I went to the clinic and saw the cancer patients, I fell in love with the experience. I was offered a job at Harvard University, but I couldn’t afford to live in Boston, so I accepted an assistant professorship in medicine at Wake Forest University. I was married at the time, to my wife, Loretta—the love of my life and the best decision I ever made. So we moved to North Carolina,” said Dr. Muss.

He continued: “Going to Wake Forest launched my career. I had two terrific mentors. The first was Charles Spurr, MD, who was one of the early ASCO members, at a time when there were only 50 attendees at the annual meeting. The other mentor, Bill Hazzard, MD, was a founding father of geriatrics. Not surprisingly, it was Bill who got me interested in geriatric oncology.”

Dr. Muss served at Wake Forest in various positions, ending his tenure there in 1996 as Associate Director for Clinical Research. He then became Division Director of Hematology/Oncology at the University of Vermont Fletcher Allen Health Care.

We’re focusing on older patients with cancer and are using instruments such as the geriatric assessment to develop tools to ask questions that are never in the chart; for instance: Can you walk a block? Can you dress yourself?
— Hyman Muss, MD

“I had about 10 good years or so in Vermont, and then my wife and I decided we would like to move to a place with warmer weather. As luck would have it, I had some good friends in North Carolina at the Lineberger Comprehensive Cancer Center in Chapel Hill, and they offered me an opportunity to relocate and build a geriatric oncology program. So my wife and I packed up and moved back to North Carolina.”

“I’ve been here about 7 years, and we’ve developed a terrific geriatric oncology program. Not just research, we have a top-notch training program for residents and fellows. We’ve acquired substantial funding from the Breast Cancer Research Foundation in New York and the Kay Yow Cancer Fund in North Carolina as well as several other grants. We’re focusing on older patients with cancer and are using instruments such as the geriatric assessment to develop tools to ask questions that are never in the chart; for instance: Can you walk a block? Can you dress yourself? Can you shop for groceries? These questions help to address the mental status issues and day-to-day quality-of-life metrics.”

Inspiring Giants in the Field

Muss explained that he and his colleagues are aggregating data to use for a host of issues, such as predicting the ability to endure therapy toxicity. “Although she’s much younger than me, one of my favorite colleagues is Arti Hurria, MD, who is on our ASCO board and is one of the leaders in the research of predicting how the older cancer patient will react to various elements of treatment, which allows us to tailor our management strategy. Dr. Martine Extermann, MD, a world expert in geriatric oncology, is also a pioneer in this area.”

During the past decade or so, geriatric oncology has received a lot of overdue attention within the oncology community. Dr. Muss, who has been at the vanguard of this movement, was quick to point out the giants in the field who inspired his interest and dedication. Among them are former ASCO president B.J. Kennedy, MD, who in his 1988 presidential speech encouraged all medical oncologists to understand and study aging and cancer; his long-time colleague Lodovico Balducci, MD, who published the first textbook in the field, Geriatric Oncology; and Dr. Harvey Cohen at Duke who co-chairs the Alliance Cancer in Elderly Committee with Dr. Muss.

“I’m an older guy myself now, but I love working in this field and will continue the hard work until one of my associates comes up to me and says, ‘Hy, you’re not cutting it anymore.’ I work with some incredible people, and we’re totally engaged in our work. It’s just a terrific time to be a researcher and clinician.” 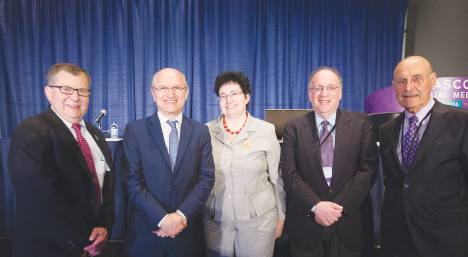 Asked if he does anything to decompress from his grueling schedule in the lab and clinic, Dr. Muss replied: “I’m an outdoor guy, and my wife and I take hiking and cycling vacations. We love spending time with our three wonderful kids and their families. And I absolutely love to fly fish. I’ve fished all around our beautiful country. It’s just wonderful being in the outdoors, enjoying the beauty of nature.”

May
13
Today In Oncology

AI System May Aid in Diagnosing Cancer of Unknown Primary