Nobel Prize in Physiology or Medicine (1975)

David Baltimore, PhD, whose work profoundly influenced international science, was born on March 7, 1938, in Queens, New York, to Gertrude and Richard Baltimore. While he was in second grade, the family moved to Great Neck, New York, a middle-class suburb with top-notch public schools.

“My father never went to college. He grew up poor and never had the opportunity. But he was an intelligent and thoughtful man, and at the beginning of the Depression, he went into the garment business in Manhattan.

There my father manufactured women’s coats and suits. And he did quite well,” said Dr. Baltimore.

“My mother, on the other hand,” he continued, “went to Hunter High School, which was for bright young women in those days, and then matriculated to New York University on a scholarship. In the early 1940s, she went back to school and obtained her master’s degree in experimental psychology. She taught at The New School for a number of years and also at Sarah Lawrence College, where she received tenure at age 62.”

Dr. Baltimore’s mother steered her son to a summer program at the Jackson Memorial Laboratory in Bar Harbor, Maine. “I spent the summer between my junior and senior years in high school working with three of the greatest mouse biologists of the time: Drs. Elizabeth “Tibby” Russell, Don Bailey, and Will Silvers. I was introduced to scientific research that absolutely captivated me. I did a few research projects that didn’t amount to much, but I had the opportuntity to learn something that nobody else in the world knew. That experience simply defined the rest of my life, and I decided I would be an experimental scientist in biology,” revealed Dr. Baltimore.

I spent the summer between my junior and senior years in high school working with three of the greatest mouse biologists of the time. I was introduced to scientific research that absolutely captivated me. That experience simply defined the rest of my life, and I decided I would be an experimental scientist in biology.
— David Baltimore, PhD

Dr. Baltimore made what many, including his father, considered to be an odd choice for a budding experimental biologist who’d been accepted to Harvard University—he entered Swarthmore College in 1956 instead, a small liberal arts school. “I knew I was going to be an experimental scientist, so by attending Swarthmore, I felt I’d expand my general knowledge of the humanities, which helped my leadership roles later in life,” he said.

During his last 2 years at Swarthmore, Dr. Baltimore was in an honors program, which held once-a-week seminars—an environment that allowed the students to develop independent education. “I’d been reading about bacteriophage and wanted to see what a bacteriophage plaque looked like and make a lawn of bacteria. They didn’t have any, but the professor said that if I obtained some phage, we could do it,” he noted.

Dr. Baltimore knew that Cold Spring Harbor Laboratory, which was a 20-minute drive from his family home on Long Island, was the epicenter of microbiology. During Easter vacation, he drove to the famous laboratory in pursuit of bacteriophage. “I’d read papers by Helen Gay who worked at Cold Spring Harbor, so that’s who I looked up. She was very nice, but microbiology wasn’t her field, and she steered me to George Streisinger. He was great. I mean here this kid walks into his office asking for bacteriophage. He said sure and gave me phage.” 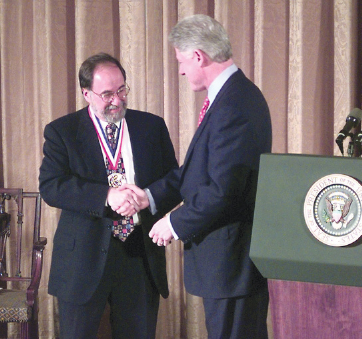 Dr. Streisinger was initiating the Cold Spring Harbor Laboratory Undergraduate Research Program that summer and offered Dr. Baltimore a spot. “I had other plans but immediately changed them. I spent the entire summer at Cold Spring Harbor Lab and met all the scientists who were creating the field of molecular biology, such as Salvador Luria, who invited me to do my graduate work at the Massachusetts Institute of Technology (MIT). After graduating Swarthmore in 1960, with high honors in chemistry, I went to MIT to begin graduate courses toward my PhD,” explained Dr. Baltimore.

From MIT to The Rockefeller Institute

While at MIT, Dr. Baltimore’s career took a turn. “I felt that bacterial or phage biology had run its course, and my focus began to move to mammalian biology. This was 1960, and you couldn’t do too much with the mouse model in those days. “But I thought that maybe animal viruses could do for mammalian biology what bacteriophages did for bacterial biology,” he said.

Dr. Baltimore presented his idea to Salvador Luria, who was doing research at MIT. “Dr. Luria found my idea interesting and suggested that I explore it at the lab of Phil Marcus at Albert Einstein. While I was working at this lab, Dr. Luria arranged for me to take a course in animal virology at Cold Spring Harbor Laboratory. While there, I met Richard Franklin, who had a lab at The Rockefeller Institute in New York, which was one of the few labs pioneering molecular research on animal virology,” he added.

“With Dr. Luria’s high recommendation,” continued Dr. Baltimore, “I moved from MIT to The Rockefeller Institute and began working in Dr. Franklin’s lab. Thinking back, it was a pretty remarkable favor, since Detlev Bronk, who was the President at Rockefeller, accepted every student personally. Dr. Luria, who won the Nobel Prize a few years later, was a terrific man, full of energy. He just loved what he did.”

Asked about the experience in Dr. Franklin’s lab, Dr. Baltimore called it the most fruitful experience he’d ever had. “I worked with RNA viruses. The first thing I did was to show that the virus inhibited cellular RNA synthesis and then developed its own RNA synthesis. Later, I discovered the poliovirus RNA polymerase, the first RNA-dependent RNA polymerase to be found. Over the course of a little more than a year, Richard and I published about 13 papers. I became fully involved in the biochemistry of RNA viruses, which I stayed with for decades.”

On to Animal Viruses

The rarified world of experimental science is somewhat circular, and Dr. Baltimore’s career expanded with each move. He stayed at The Rockefeller Institute for 2 years, learning biochemistry, so he could adapt those skills to working with extracts of virus-infected cells. It was there where he made fundamental discoveries on virus replication and its effect on cell metabolism, including the first description of an RNA replicase.

The discovery of reverse transcriptase gave us an understanding of cancer-inducing viruses, which opened the door for further investigation. It strongly implied that cancer was produced by a gene alteration. We received the Nobel Prize within 5 years from the discovery.
— David Baltimore, PhD

Dr. Baltimore completed his PhD thesis work in 18 months and headed back to MIT for postdoctoral research with James Darnell, PhD, in 1963. “I learned a lot of different lab techniques relevant to viruses and cells,” shared Dr. Baltimore. After a year, he moved back to Albert Einstein College of Medicine and pursued vigorous training in biochemistry with Jerard Hurwitz, PhD. “I did some interesting experiments with Dr. Hurwitz, including one that was quite important, showing how RNA polymerase initiates chains of RNA with a triphosphate, which wasn’t known at the time,” he revealed.

By then, everyone in the animal virus world knew of Dr. Baltimore’s work, having read his papers. In February 1965, famed virologist Renato Dulbecco, PhD, was in New York giving a series of lectures. “Dr. Dulbecco called me at Albert Einstein and said he would be running a large laboratory at the Salk Institute for Biological Studies in La Jolla, California, which was still in the planning stages. He offered me a section of his lab, where I could conduct my own independent work. I’d never been keen on going across the country to California, but this was an opportunity I couldn’t pass up,” said Dr. Baltimore.

Dr. Baltimore stayed at the Salk Institute as an independent research associate for more than 2 fruitful years. During that time, he worked with Alice Huang, PhD, who later became his wife. There, Dr. Baltimore made a key discovery that polio produced its viral proteins as a single large protein, which was subsequently processed into individual functional peptides. In 1968, his one-time mentor, Dr. Luria, recruited Dr. Baltimore back to MIT, as Associate Professor of Microbiology in the Department of Biology.

“I worked at MIT for the next 30 years. It was there when I switched my work from poliovirus to other viruses, one of which my wife introduced me to, vesicular stomatitis virus (VSV). We found that VSV involved an RNA polymerase within the virus particle. That allowed it be what is now known as a negative-strand RNA, which stimulated the process of transcription and replication of more RNA,” he added.

Dr. Baltimore explained that this work filled out the understanding of the different genetic systems in viruses, but there was one virus that didn’t fit into the picture: a class of RNA tumor viruses, which acted more like DNA. “Ten years earlier, Howard Temin suggested that the RNA genome of the virus was copied into a DNA molecule. This was an idea that few people other than Howard believed, but I decided to have a look at it,” he noted.

“I rapidly found the enzyme, and it clearly copied RNA to DNA, providing the scientific community evidence that Howard had been right all along,” revealed Dr. Baltimore. “I called him, and he said he’d been doing the same experiments, too. We both submitted papers to Nature, which were published simultaneously. We called it the RNA-dependent DNA polymerase, being very scientific about it,” he joked. “But the journalists at Nature renamed it ‘reverse transcriptase,’ and that name stuck.”

The discovery of reverse transcriptase was monumental, as it changed the paradigm of information flow in biologic systems. “It also gave us an understanding of cancer-inducing viruses, which opened the door for investigation. It strongly implied that cancer was produced by gene alteration. We received the Nobel Prize soon after,” said Dr. Baltimore. 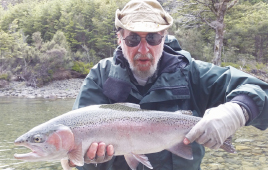 Dr. Baltimore with his catch.

In 1975, at the age of 37, Dr. Baltimore shared the Nobel Prize for Physiology and Medicine with Drs. Howard Temin and Renato Dulbecco. The citation reads: “For their discoveries concerning the interaction between tumor viruses and the genetic material of the cell.”

Dr. Baltimore said that he never set out to win the Nobel Prize; he just wanted to know as much as possible about viruses. To him, the Prize was simply another stepping stone in a long and illustrious career filled with honors; leadership positions; and most important groundbreaking scientific advances, which have expanded our knowledge of cell biology and the genetics that drive the oncogenic process.

Dr. Baltimore is currently President Emeritus, Robert Andrews Millikan Professor of Biology, at the California Institute of Technology in Pasadena. His laboratory is involved in investigating the development and functioning of the mammalian immune system and engineering immunity: translational studies to increase the range of pathogens effectively fought by the immune system and to make the immune system resist cancer growth more effectively. Dr. Baltimore, who is 78, is slowly reducing the size of his lab.

Asked if he has any avocations, Dr. Baltimore replied: “I love to fly fish. We have a home in Montana, and I fish the rivers there.”