Eliezer Robinson, MD, was born in Vienna, Austria, on June 17, 1931. At that time, Vienna, a bustling and prosperous city, was an important center of Jewish culture and education. Jews made up a large portion of the city’s professional class of doctors, lawyers, bankers, and artists.

Dr. Robinson recalled a pleasant, carefree childhood. His father was a well-to-do clothier in men’s fine suits. The Robinsons had a housekeeper and took fequent family vacations outside of Austria. However, Dr. Robinson’s cherished childhood memories took a dark turn in March 1938.

It was when Nazi Germany incorporated the Austrian Republic in what became known as the “Anschluss.”

“The Gestapo arrived; Jews were not allowed to walk the streets and had a ‘J’ sewed onto their sleeves to indicate they were Jewish. Then came the pogrom of 1938, known as Kristallnacht, which means “Night of Broken Glass.” Dr. Robinson recalled: “The Nazis burned our synagogue and shattered the windows of all the shops owned by Jews.”

According to Dr. Robinson, the situation rapidly deteriorated, and his family had to flee for their lives. “We had a large family of seven aunts and uncles, and all escaped where they could. Two went to the United States, one went to England, one went to Uruguay, two went to Cuba, and the Nazis murdered two. We were the only part of the family to escape to Palestine, which was before the State of Israel existed,” said Dr. Robinson.

From Vienna to Jerusalem

In 1940, the Robinson family along with hundreds of other refugees sailed from the Romanian port of Tulcea aboard a ship called the Pacific, destined for the port of Haifa. After a grueling journey at sea, they finally reached their destination. But the British, who had control over Palestine, decided to take drastic steps to control illegal immigration of Jews from Europe, transferred them to the Patria to depart Haifa and deposit its passengers on the island of Mauritania, off the coast of Africa.

“That night, a Jewish defense force came aboard hidden by the dark and placed a bomb on the ship, with the intention to blast a small hole in the vessel’s side and allow all the passengers time to evacuate and reach shore. But the bomb blasted a larger hole than anticipated, and the ship quickly sank. About 250 passengers, all Jewish refugees, went down with the ship. We were fortunate to escape,” revealed Dr. Robinson. 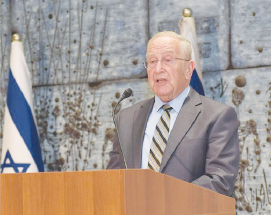 Dr. Robinson served as Vice President of the Israel Cancer Association (ICA) from 1971 to 1995.

After the harrowing adventure, the Robinsons settled in Jerusalem. Dr. Robinson explained that when they fled the sinking ship, all of their belongings were lost, leaving them with just the clothes on their backs. Fortunately, years before, Dr. Robinson’s father had traveled to Jerusalem in 1933 and purchased a piece of property, a venture deemed foolhardy at the time. Dr. Robinson’s father sold the property, using the money to open a men’s clothing shop and continue his career.

“There were language barriers that made it difficult in school,” Dr. Robinson admitted. “But I adjusted and continued my schooling up until my matriculation. It was 1948, and the State of Israel had just been established. The Arab League rejected our statehood and invaded Israel, surrounding Jerusalem with the intention of starving us.” He continued: “I was 17 at the time and was conscripted into the military, as the war between Israel and the Arab world broke out. The war ended after several months, and an armistice agreement was drawn up.” 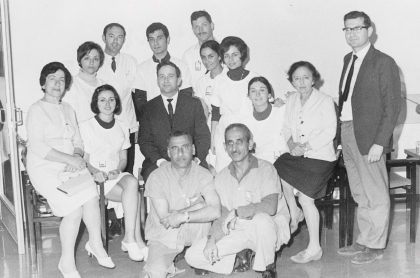 During his 28 years as Director of the Northern Israel Oncology Center, the number of oncologists rose from the original 2 to 25, many of whom became directors in other departments.

There were no medical schools in Israel, and sending Dr. Robinson abroad to school was beyond his parent’s financial reach. However, his uncle, who’d fled to Montevideo, Uruguay, to escape the Nazis invited Dr. Robinson to his home. At that time in Uruguay, which was called the Switzerland of South America, college tuition was free for all residents and nonresidents.

“I studied Spanish day and night before leaving for Montevideo. It took about 20 hours of flying time, stopping to refuel every 5 hours or so. My uncle provided me with a good place in his home to live and study, and I passed the medical school exam. In my first year in medical school, there were about 1,000 students. By the second year, only about 150 were left, with the rest failing the tests needed to proceed.”

In Montevideo, Dr. Robinson met a girl whom he later married. After 4 years of medical school in Uruguay, Dr. Robinson and his young bride returned to Israel, where Dr. Robinson completed his schooling at the newly opened Hadassah University Hospital.

Pursuing a Career in Oncology

After receiving his MD in 1960, Dr. Robinson decided to pursue a career in oncology. His mother’s breast cancer had relapsed, and he attributes her struggle with cancer as one factor in his decision. He explained that in the 1960s, Israel’s oncology division combined medical and radiation oncology.

“After 5 and a half years of studying oncology, I passed my board exams and spent 10 years as a lecturer at the Hadassah University in Jerusalem. During that time, I was fortunate to spend a sabbatical year in London at the Royal Marsden Hospital, which was a wonderful learning experience,” he added.

Cancer drugs, of course, are very expensive, and each year the ministries of health hold a meeting in which a committee discusses the merit of every new cancer drug. If approved, the drug is then entered into the ‘basket of services…. We have developed a fair and effective system.
— Eliezer Robinson, MD

Dr. Robinson returned to Israel in 1967 before the Six-Day War erupted. Following a swift and decisive victory, Israel seized control over several outlying areas. “The government decided that the population in the north of Israel had grown enough to warrant having its own dedicated cancer center, and I was given the opportunity to lead that effort,” said Dr. Robinson.

“We purchased a cobalt machine and hired two physicians to work with us, and we eventually trained others,” revealed Dr. Robinson. “As we grew, we outsourced our resources to other areas in Israel that did not have oncology services.” During his 28 years as Director of the Northern Israel Oncology Center, the number of oncologists rose from the original 2 to 25, many of whom became directors in other departments. The number of clinical patients rose from 300 to more than 1,000. “We became a very robust and productive cancer center. I’m glad to have been there from the inception,” he added.

During his leadership role at the Northern Israel Oncology Center, Dr. Robinson and colleagues published more than 200 journal papers and 170 abstracts and also conducted clinical trials investigating, among other issues, the clinical characteristics of patients who develop a second primary tumor as compared with patients with primary and single tumors, describing the difference in more than 20 tumors.

Dr. Robinson served as Vice President of the Israel Cancer Association (ICA) from 1971 to 1995, and in 1996 he was appointed Chairman of the ICA. “The ICA is the spearhead of oncology research and treatment in Israel. It also supports public education and awareness of early detection modalities and cancer prevention. In essence, the ICA is our country’s equivalent of the American Cancer Society on a smaller scale,” explained Dr. Robinson.

The government decided that the population in the north of Israel had grown enough to warrant having its own dedicated cancer center, and I was given the opportunity to lead that effort. We became a very robust and productive cancer center. I’m glad to have been there from the inception.
— Eliezer Robinson, MD

Dr. Robinson has been an ASCO member for over 30 years and took part in most of the organization’s Annual meetings. During the years, he served as Chairman of ASCO’s International Affairs Committee as well as a member of its Survivorship Committee.

In 2000, while serving as President of the Council of the International Union Against Cancer, Dr. Robinson was invited to sign the Charter of Paris with more than 100 international leaders.

‘A Fair and Effective System’

Asked about the current state of oncology in Israel, Dr. Robinson replied: “Israeli citizens pay a certain amount of their salary to the government, and in return we have comprehensive health-care services for all citizens. Cancer drugs, of course, are very expensive, and each year the ministries of health hold a meeting in which a committee discusses the merit of every new cancer drug. If approved, the drug is then entered into the ‘basket of services,’ which along with other cancer services is part of our universal health-care system. We have developed a fair and effective system.”

Dr. Robinson with his late wife, children, and grandchildren

Dr. Robinson, who is semi-retired, still leads an active life, volunteering at the hospital and consulting for a number of institutions including the ICA. “Unfortunately, I lost my wife 2 years ago, but I keep busy. I am an avid swimmer and have many associates and friends in Israel and abroad. Most important, my 3 children gave me 12 beautiful grandchildren, who keep me very busy.