Key to the Cure Award, The Cure for Lymphoma Foundation (1999)

George P. Canellos, MD, President of ASCO from 1993 to 1994, was born in Boston on November 1, 1934. “I came from a business family and never wanted to do business at all. As long back as I can remember, I always found medicine attractive—not only because you could help people, but you could also be a part of scientific progress,” he shared.

Dr. Canellos went to high school at the Boston Latin School, a public “exam school” established in 1635, the oldest public school in the United States.

From Harvard to Columbia

During his tenure at Harvard College, Dr. Canellos worked at a surgical research laboratory at the Massachusetts General Hospital. “I was inspired by the chief of the research department, a famous surgeon named Dr. Oliver Cope, who did pioneering work in thyroid and parathyroid surgery. He was also an early proponent of minimal breast surgery, well ahead of his time. He told me, in a good-natured way, that I needed to spread my wings and get out of Boston. He strongly advised that I go to Columbia Medical School, which I did,” said Dr. Canellos.

After graduating Harvard, Dr. Canellos attended Columbia University College of Physicians and Surgeons in New York City, which he described as a “very thorough” medical education. From there, he applied for an internship at the Massachusetts General Hospital, where he’d previously worked in the Department of Surgery.

I was inspired by the chief of the research department, a famous surgeon named Dr. Oliver Cope, who did pioneering work in thyroid and parathyroid surgery. He was also an early proponent of minimal breast surgery, well ahead of his time.
— George P. Canellos, MD

“While I was thinking about a possible career in surgery, I came to the honest self-realization that I had the manual dexterity of a seal, and perhaps I should switch. But the experience did tell me something important about cancer; it was obvious that surgery at that time was not adequate. Operations were done, but patients then recurred,” said Dr. Canellos.

He continued: “I remember visiting the hospital library and looking up a series of books on cancer by a British author named Ronald Raven, MD. There was a section on chemotherapeutic agents, which was limited at that time, but as I read, it dawned on me that I should go into internal medicine. The future of oncology wasn’t in surgery or radiation, but rather in some form of systemic medicinal therapy that attacked the tumor.”

It was the beginning of the Vietnam War, and medical residents had the obligation of the so-called Doctor’s Draft; however, one could get credit for the draft by becoming a commissioned officer in the U.S. Public Health Service and being assigned to the National Institutes of Health, which Dr. Canellos did, entering the National Cancer Institute (NCI) in 1963.

“It was the early age of combination chemotherapy, led by Drs. Emil (Tom) Frei and Emil (Jay) Freireich, who were inspirational to us. One of my colleagues was Dr. Vince DeVita, whose enthusiasm and skill made me a therapeutician. I joined Vince’s pioneering work in Hodgkin lymphoma with combination chemotherapy, and then we began work in other lymphomas. We subsequently developed some regimens that are still in use, such as C-MOPP and CVP, in large cell lymphomas,” explained Dr. Canellos.

“Dr. DeVita and I wrote the first C-MOPP paper that talked about the cure of large cell lymphomas, which I believe was a milestone. In my opinion, this paper, and the DeVita et al paper on Hodgkin disease, helped convince the American Board of Internal Medicine to recognize medical oncology as a specialty,” said Dr. Canellos.

Dr. Canellos explained that in the mid-1970s, he and Dr. DeVita published the first paper about combination chemotherapy (CMF) in breast cancer. The regimen was tested at the NCI before the organization connected with Gianni Bonadonna, MD, of the Instituto Nazionale, in Milan, Italy.

“Dr. Bonadonna came to the NCI to see what we were doing. At that time in Italy, he had a large early-stage breast cancer population who’d had surgery, and Dr. Bonadonna and his associates were willing to conduct a randomized controlled trial of a slightly dose-reduced version of CMF vs no therapy. He received the regimen and NCI funding. The results were quite remarkable and were published in The New England Journal of Medicine in 1976, which led to further research into combination chemotherapy as an adjuvant in early breast cancer,” he revealed.

Slow Recognition of the Oncology Discipline

In 1974, Dr. Canellos became the Acting Clinical Director of the NCI, but Dr. Tom Frei recruited him to Dana-Farber to establish a medical oncology program, an offer he couldn’t refuse. “Tom was Dana-Farber’s Director, and I thought it was an interesting challenge. At that time, a lot of people didn’t even know what a cancer center was. There was unfamiliarity about oncology in the practicing community. There were limitations in what we could do in solid tumors at the time. That said, it helped enormously to have a large group of talented fellows in the Boston area, from Harvard and other first-class institutions.”

At that time, Dr. Canellos noted that cisplatin had just entered the clinic in testicular cancer. “A classmate from my Harvard days became Head of Urology at the Brigham and Women’s Hospital and invited me to speak to his urologists about this new drug cisplatin and its efficacy in testicular cancer. We started getting referrals of patients with testicular cancer, and we’d write up papers and put the name of the referring urologist on the paper. It got us more patients, which we needed to show the house staff and incoming fellows the potential of oncology,” said Dr. Canellos. He added: “We gave talks at community hospitals about our program, but getting full recognition of the oncology discipline was a slow educational process.”

Vince DeVita and the rest of us would meet early in the morning in the salon with a large blackboard and start writing up what we were going to do for a patient’s disease, and we’d banter for about an hour or two before we came to a conclusion. Then we’d go to work in the clinic.
— George P. Canellos, MD

Further, in the early days at Dana-Farber, a team led by Dr. Canellos established a high-dose systemic methotrexate as a treatment for central nervous system lymphoma.

In 1979, Craig Henderson, MD, became Director of Dana-Farber’s Breast Evaluation Center, in which surgeons, radiation therapists, and medical oncologists worked together as a multidisciplinary team. “It was in the era of pioneering lumpectomy and radiation instead of radical mastectomy. Once word got out, a lot of women came to be evaluated. Dr. Henderson made an important contribution to the treatment of breast cancer. But in those days, prior to specialization, we saw everything, from brain tumors to colon cancer.”

In 1994, Dr. Canellos was nominated to be ASCO President; at that time, he was Editor-in-Chief of the Journal of Clinical Oncology, among other heady responsibilities. His ASCO presidential predecessor was Bernie Fisher, MD, who encouraged Dr. Canellos to accept the position. It was a period of change, with the American Association of Cancer Research (AACR) breaking its ties with the Society, citing an irreconcilable difference in approaches: AACR was science-based; ASCO was practice-based. Dr. Canellos was hell-bent on melding the two medical philosophies. 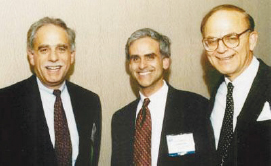 “The AACR split was one crisis during my presidency, but the other, perhaps even greater, was the controversy over Bernie Fisher’s National Surgical Adjuvant Breast Group’s trial; one person fudged the data, which created a firestorm against Bernie. But ASCO stood by him, as did I.

“At our annual meeting during the plenary session, I cancelled most of the abstracts and had Bernie as well as his statistician come and speak. He received a standing ovation. People were appalled at the way he’d been treated. It was terrible that a number of prominent people backed away from Bernie. Think of his contribution to the field. It was a herd mentality, a sad reflection on our society.”

Dr. Canellos is the first to hold the William Rosenberg Chair in Medicine at the Harvard Medical School and Dana-Farber Cancer Institute, where he remains Professor of Medicine. “I continue to teach, which I love; see patients 1 day a week; and spend a lot of time with our fellows. These are the future leaders of our field. I also do a lot of editing for Oncology UpToDate, which is successful resource. And there are two editions of my book on lymphomas. We decided not to do a third, as textbooks might be at the end of an era, given the digital format.”

Recalling his days at the NCI, an era of productivity unhampered by bureaucratic red tape, Dr. Canellos said: “Vince DeVita and the rest of us would meet early in the morning in the salon with a large blackboard and start writing up what we were going to do for a patient’s disease, and we’d banter for about an hour or two until we came to a conclusion. Then we’d go to work in the clinic. And the fellows we had were the best and the brightest, and the least expensive. We got a lot done in a short time, and it was thrilling to be part of that team.”

In February 2016, ASCO recognized Dr. Canellos as an Oncology Luminary in part for his work as a clinical researcher in the creation of two of the most influential treatments in cancer care. At age 82, he shows no sign of slowing down. In the little leisure time his schedule affords, Dr. Canellos reads, and historical fiction is his preferred genre.