At the Forefront of Cancer Genetics, Bert Vogelstein, MD, Calls for Focus on Early Detection and Prevention

TITLE
Clayton Professor of Oncology and Pathology and Director of the Ludwig Center for Cancer Genetics and Therapeutics, Sidney Kimmel Comprehensive Cancer Center of the Johns Hopkins University School of Medicine, Baltimore, Maryland

Bert Vogelstein, MD, was born on June 2, 1949, at The Johns Hopkins Hospital in Baltimore, Maryland, the same renowned institution where he would later make his mark in the field of cancer genetics. As a young teen, he was an enthusiast and independent consumer of books, one of which helped shape his desire to become a doctor. “When I was 13 years old, I read a pamphlet published by Johns Hopkins called The Making of a Physician, which influenced my decision to enter the field of medicine. It made being a physician seem like a very rewarding life,” said Dr. Vogelstein.

Dr. Vogelstein was reared in a tight-knit family that put high valuation on education. His father was a lawyer and his mother, a strong-willed homemaker who volunteered for charitable organizations and came from a heritage of scholarly rabbis. Finding little stimulation in the grade-school curricula, Dr. Vogelstein would often skip elementary school after his father dropped him off in the morning and make a beeline to the local library, where he’d peruse the stacks, reading everything that caught his interest.

“I read a lot of biographies as a kid. In my family, people were everything. There’s a saying in Hebrew, tikkun olam, which means, “repair the world.” Of course, you don’t take it literally, but you contribute in whatever small way you can to make the world a better place,” said Dr. Vogelstein.

In an effort to tame her son’s rebellion with the rote-learning process of public schooling, Dr. Vogelstein’s mother placed him in an Orthodox Jewish academy. In the tenth grade, Dr. Vogelstein, who still made daily forays from school to the public library, was politely asked to leave. He returned to public school and excelled academically. In his senior year, a teacher named Paul Bolenbaugh offered an idea that fortified Dr. Vogelstein’s own philosophy: The main thing you should learn in school should be how to learn, not all of these superfluous names and facts.

From Mathematics to Medicine

In 1966, Dr. Vogelstein entered the University of Pennsylvania. Although he was considering pre-med, he had a natural inclination to mathematics.

“In the beginning of my sophomore year, two professors in the mathematics department, Jerry Kazdan and Steve Shatz, asked me if I would join their department. It was flattering, as well as fulfilling, because I’ve always loved the singular beauty of math and the logic behind problem-solving. They didn’t pressure me to go into math professionally, but they probably would have liked that.”

Her parents wanted answers to questions that, at that time, had none. This was 1974, and our knowledge of the causes of cancers was nil. They wanted to know why their little girl had gotten sick… .
— Bert Vogelstein, MD

Dr. Vogelstein continued: “In my senior year, I was talking with Professor Kazdan about choosing a career, and he posed a question: What would you do if money were not an issue in that equation? The tikkun olam consciousness about making the world a better place was always in the back of my head, and medicine seemed to be a more direct route to that goal at the time.”

Dr. Vogelstein received a bachelor’s degree in mathematics from the University of Pennsylvania in 1970 and entered Johns Hopkins University School of Medicine, attaining his MD in 1974.

After graduating, Dr. Vogelstein remained at Johns Hopkins for his internship and residency in pediatrics, which proved to be an inflection point in his career when a 4-year-old girl named Melissa was brought into the ER one evening. Dr. Vogelstein was assigned to the case and had to inform the parents that their child had leukemia.

“Her parents, obviously very nervous and anxious, tried to understand what I was telling them. They wanted answers to questions that, at that time, had none. This was 1974, and our knowledge of the causes of cancers was nil. They wanted to know why their little girl had gotten sick, and particularly whether they’d done something wrong that contributed to her developing the disease. I did my best to reassure them that they hadn’t, but the terrible truth was that I was just being polite, because I had no idea of what caused this little girl’s cancer,” admitted Dr. Vogelstein. 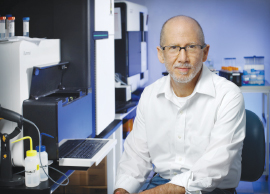 Over his 2-year pediatric residency, Dr. Vogelstein saw many cancer patients like Melissa. In large part, it was the feeling of helplessness that drove him into a career in cancer research. “Without some knowledge of the root cause of a disease, there is little hope that you can do something about it. I became convincined that trying to find those causes would be a rewarding way to spend my life,” said Dr. Vogelstein. He returned to Johns Hopkins in 1978 and has been on the faculty pursuing that objective ever since.”

Unlike the bustling gregarious world of clinical oncology, experimental science is a rather cloistered discipline, where highly dedicated scientists work grueling hours in search of a replicable finding that will validate a hypothesis; for every success, there are myriad setbacks.

Over the past several decades, Dr. Vogelstein’s laboratory has produced a steady flow of scientific breakthroughs. His research on colorectal cancer formed a new paradigm in modern cancer research and provided the basis for his theorem that “cancer is caused by the sequential mutations of specific oncogenes and tumor-suppressor genes.” 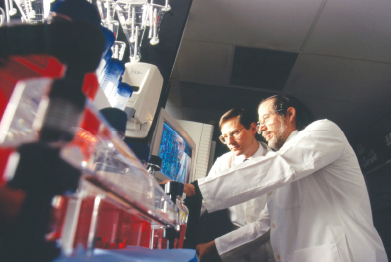 Although the p53 protein had already been discovered, there was no evidence that it played a major role in human cancers until research in Dr. Vogelstein’s laboratory showed conclusively that p53 was a tumor-suppressor gene, a finding that changed the course of oncology research forever after. He offered a snapshot of that experience.

“Back in the mid-1980s, we were trying to find a tumor-suppressor gene that we expected to be on chromosome 17. This became the thesis topic of a graduate student named Suzanne Baker. We expected that she’d make some progress toward mapping where the gene might lie on the chromosome, not actually find the gene. At the time, tumor-suppressor genes were mythical beasts, as none had been discovered. However, during these studies, a gene called p53 kept popping up in the place on chromosome 17 we thought harbored the putative suppressor gene. At the time, we didn’t think p53 was the culprit; it was thought to be an oncogene, exactly the opposite of a tumor-suppressor gene. But Suzie designed a novel sequencing strategy to test this idea, mostly so p53 could be excluded so the search for the real culprit could continue.

“One Friday afternoon in December 1988, she exclaimed, ‘Bert, look. There seems to be a mutation here.’ We looked at it and knew it would be exciting if it were true, but we were both skeptical.

“The next step was to make sure that the change really was a mutation that wasn’t found in the patient’s normal cells, which Susie did. It took her about 3 weeks to verify that. We looked at other cancers and found a similar mutation. It took us about 2 months to realize we had discovered a cancer gene that was likely involved in a large number of cancers of many types. Suzie’s work started a revolution in cancer research, and a few years later, the p53 gene was named the Molecule of the Year by Science magazine.”

Asked about the future of oncology Dr. Vogelstein responded: “Now that we understand so much about the genetic basis of cancer, I’m optimistic we’ll make progress in the years to come. But I also think that we need to readjust our efforts and spend more of our resources and intellectual energy on prevention and early detection.”

It took us about 2 months to realize we had discovered a cancer gene [p53] that was likely involved in most cancers in the world, and that was going to start a revolution in cancer research, which it did.
— Bert Vogelstein, MD

He continued: “We now spend an inordinate amount of our efforts developing drugs to fight metastatic disease. It’s certainly critical, but I’d like to see about 50% of our efforts directed to early detection and prevention. I think heart disease serves as a good analogy. In cardiology, the focus over the past half century has been on prevention, not treating massive infarcts or strokes. In cancer, we’ve taken the opposite approach.”

A large part of Dr. Vogelstein’s laboratory is now focused on developing genetic tests for early detection. “We know there is a small group of common genes and pathways that are altered in different cancers,” he stated. “This knowledge can be used to develop potential therapies but can also be used to develop new diagnostic tools and as biomarkers to detect cancers when they are still at curable stages.”

Fulfillment Through Family and Work

Dr. Vogelstein has received volumes of awards for his pioneering work in experimental cancer research. He holds the distinction of being the most highly cited scientist in the world, with nearly 300,000 citations to his published articles—more than any other scientist in any discipline. Although it’s nice to be recognized, he said, it’s his work in the laboratory, and the potential benefits for patients, that drives and fulfills him. He’s very pleased that he was able to conduct his life’s work two blocks from where he was born.

Asked whether he had any hobbies or activities to help decompress from his strenuous schedule, he paused, as if the question were strange, and replied: “My family and my work. That’s all I need.”