NOTABLE HONORS
Member of the Association of American Physicians (2015)

Fellow of the American Society of Clinical Oncology (2012)

Bruce E. Johnson, MD, FASCO, 2017–2018 ASCO President, was born in St. Peter, Minnesota, and grew up on a rural dairy farm. “Neither of my parents had college degrees, but working on a dairy farm with them gave me a solid work ethic. I was working outside on the farm before I was 10 years old. In comparison to the other farms, ours was about in the middle-range size. I went to a rural school that had 50 kids to a class,” said Dr. Johnson.

He continued: “Schoolwork came relatively easy to me, and I did well in high school.

I had very strong feelings about pursuing an education. My brother, who was a year older than me, received an appointment to the Air Force Academy, so I got the idea from him to go to a competitive school.”

In 1971, he left the family farm and went to Harvard University. “My parents were a bit uncomfortable about me going to a school that was so far away from home,” admitted Dr. Johnson. “But one of the good things about Harvard then—and now—is that it is a need-blind institution, so they provided whatever funds needed to make it doable.”

Going to Harvard provided new opportunities and first-time-ever experiences for Dr. Johnson, such as flying in an airplane. “I went in cold, not knowing anybody, but I made friends easily. I did, however, struggle academically a bit for the first couple of years, but by my junior year, I’d mastered the challenges of the school’s rigorous academics. I was very interested in the sciences, both the didactic as well as the research disciplines,” he said.

Early on, she had chosen to work with B.J. Kennedy, MD, former ASCO President and one of the pioneers in medical oncology. Dr. Bloomfield’s clinical and laboratory interests were in acute leukemia. She worked very hard; after everyone was finished rounding in the evening, she would visit all the patients on her studies and separately track the patients, their lab reports, and their clinical progress. She made certain that every person with leukemia had cytogenetic studies, so she could study the relationship between other genomic changes. Working with Dr. Bloomfield was a terrific learning experience.”

We’ve come to a point of breaking patients with lung cancer into subsets, so we can treat nearly half with targeted therapy or immunotherapy rather than cytotoxic chemotherapy.
— Bruce E. Johnson, MD, FASCO

At the University of Chicago, Dr. Johnson met Harvey M. Golomb, MD, who at the time was Associate Professor of Medicine with an interest in lung cancer. “I was the intern who helped open the oncology services at the University, which had none when I arrived. By then, I’d decided on oncology as my career but hadn’t made a commitment to lung cancer. Harvey was treating lung cancer patients with a four-drug regimen called CAMP [cyclophosphamide, doxorubicin, methotrexate, procarbazine], and I worked in the clinic with him. We’ve stayed in touch ever since,” said Dr. Johnson, adding, “When Harvey was ASCO President, he put me on ASCO committees.”

From the NCI to Dana-Farber

In 1982, following his internship and residency at the University of Chicago, Dr. Johnson trained in the intramural program at the National Cancer Institute (NCI). His first year was devoted solely to the clinic. “I studied various cancers and elected to specialize in lung cancer. The three doctors I interacted with were Paul Bunn, John Minna (our branch chief), and Daniel Ihde. Partly from my experience with Clara Bloomfield, I instituted a program on annotating the cell lines from the patients with lung cancer that had already been established. I also collected tumor tissues from patient autopsies to compare the molecular findings in their cell lines, making sure we got karyotypes—another thing I learned from Dr. Bloomfield,” revealed Dr. Johnson. Dr. Johnson spent 17 years at NCI, becoming a section chief, running a lab, and heading the lung cancer section. “When Dana-Farber did a search for someone to head its lung cancer center, I was offered the position,” he said, which he accepted in 1998. “I have been at this fine institution ever since.”

Dana-Farber had been internationally known for its work in hematology, and when Dr. Johnson arrived, there was only one solid tumor specialist who had attained the rank of Professor, former ASCO President, Robert Mayer, MD. “They made me the head of the lung cancer disease center. A number of people left, and I made some significant hires. My first goal was to put together a faculty and to collaborate with our laboratory investigators to create a lung cancer research group, which I did. Working with Tom Lynch [of Massachusetts General Hospital], who’d had a lot of experience bringing in industry studies, was a huge benefit. I ran the lung cancer lab for about 10 years after my arrival at the Dana-Farber Cancer Institute.”

Dr. Johnson was a member of a Dana-Farber research group that was one of the groups to discover mutations in the epidermal growth factor receptor (EGFR) in lung cancer, which helped identify patient subsets that respond to agents targeting the EGFR. Three years ago, Dr. Johnson transitioned from running the lung cancer group to heading clinical research at Dana-Farber. 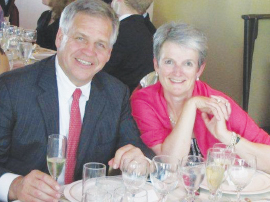 Dr. Johnson with his wife, Georgia

“For this group of patients [EGFR–mutant lung cancer], one can safely say their outcome is dramatically different from what we’ve seen in the past. They can look forward to surviving for years rather than months. In my own clinic, we have patients who are more than 10-year survivors. The EGFR mutation was discovered in 2004, and there was not universal agreement that it was an important predictor for response to epidermal growth factor tyrosine kinase inhibitors. After about 5 years of research, however, and Dr. Tony Mok’s important paper in The New England Journal of Medicine, people came around,” said Dr. Johnson.

He explained the real-life effects of outcomes-predictor mutations such as EGFR. “With these tumor markers, about 20% of patients with lung cancer can receive targeted therapies rather than chemotherapy. And this past year, due to these predictors, it was discovered that another 20% of lung cancer patients could receive initial immunotherapy instead of chemotherapy. So, within a little bit longer than a decade, we’ve come to a point of breaking patients with lung cancer into subsets, so we can treat nearly half with targeted therapy or immunotherapy rather than cytotoxic chemotherapy.”

Dr. Johnson had been through the ASCO presidency nomination process several times before receiving the call from then ASCO President Julie Vose, MD. “I was at home on a Saturday morning and took the call on my cell phone. I’d been Chair of the ASCO Communications and Educational Committee and enjoyed serving on these and other committees, so when I was elected, I was very happy. The last ASCO President from Dana-Farber was Robert Mayer, and that was about 20 years ago, so that added to the honor.”

As Dr. Johnson readies himself to assume the ASCO presidency, he said he’s in a fortunate stage of his career, in which he can delegate responsibilities to his very fine staff and associates. During his term, he’s looking forward to expanding the potential benefits of precision medicine into the community.

Asked how he decompresses from his herculean schedule, he responded, “I work with a personal trainer. I also like to ski and watch movies with my wife, who is on the board of our local theater. Asked about his favorite movie, Dr. Johnson said “Saving Private Ryan.”