After Nearly 4 Decades of Research, W.K. Alfred Yung, MD, Sees a New Era Ahead for Advances in Brain Tumors

It was the oldest and then most coveted higher-education institution for students looking to pursue careers in engineering, law, and medicine.Despite excelling in science and math and achieving a stellar academic record during his high school years, Dr. Yung failed to score high enough on the university’s advance exam for acceptance into its School of Medicine and left his country when he was just 20 years old to fulfill his dream of becoming a primary care physician.

“I wanted to stay in Hong Kong, but all the students pursuing higher education knew that getting into the University of Hong Kong was very competitive, and many had an alternative plan to travel to Canada, Australia, the British Commonwealth, or America to attend college if they weren’t accepted into the University of Hong Kong. My plan B was to apply to the University of Minnesota, because it didn’t require the Scholastic Assessment Test (SAT) for admission, just a high school transcript of my grades,” said Dr. Yung. “I had a very good high school transcript, but my SAT score in English was pretty lousy, and I knew it would be difficult to get into American universities. Leaving Hong Kong was difficult both personally and financially. I was grateful my father was so emotionally supportive and encouraged me to go, but he also said I would have to find a way to help support my tuition and housing expenses.”

To finance his education, Dr. Yung worked as a research animal caretaker looking after a mouse colony in a laboratory at the University of Minnesota Medical School. The experience of working in a research environment altered the direction of his medical career from one in primary care to academic medicine and eventually led to his becoming a leader in the field of brain cancer research.

After graduating from the University of Minnesota, Dr. Yung pursued his medical degree at the University of Chicago Pritzker School of Medicine, graduating in 1975. While working part time in the school’s radiation research laboratory and in the Department of Neurology, Dr. Yung developed a Kirsten murine sarcoma virus, a leukemia virus–induced glioma-like model in mice. The experience ignited an interest in malignant brain tumor research that would last his entire career.

The establishment of the National Cancer Moonshot will result, I believe, in the greater sharing of scientific ideas, which will accelerate progress in the development of more targeted therapies [for glioblastoma].
— W.K. Alfred Yung, MD

“It was almost like God’s guidance gave me the idea that perhaps my impact on medicine would be stronger as an academic physician and professor than a primary care physician. I could work in the forefront of medical advances and also train the next generation of physician-scientists to make a bigger contribution in the treatment of brain cancer,” said Dr. Yung.

After graduating from medical school, Dr. Yung completed a residency program in neurology at the University of California, San Diego, and, in 1978, he moved to New York to pursue a fellowship in neuro-oncology at Memorial Sloan Kettering Cancer Center (MSKCC). “Sloan Kettering had just created a subspecialty in brain cancer research,” said Dr. Yung. “It was an exciting time to be there, because in those days treatment for brain tumors was pretty primitive. There was just radiation therapy and surgery, and not much was known about the biology of the tumor, and the average lifespan for patients with glioblastoma was just 9 months. I was frustrated by how little we understood this disease and how few options patients had. So I decided that research in brain tumors and treatment was where I needed to focus my energy.”

While a fellow at MSK, Dr. Yung explored the therapeutic potential of the newly discovered information that the epidermal growth factor receptor (EGFR) receptor is one of the key oncogenes mutated in cancers and likely a major culprit in the development of malignant gliomas. He and Dr. Peter Steck would later discover that deletion of the PTEN tumor-suppressor gene was involved in progression of glioblastoma multiforme, the most common and aggressive type of brain cancer.

The Career of a Lifetime 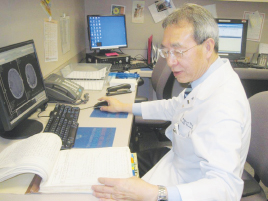 Dr. Yung in his lab

Dr. Yung has been at the cancer center ever since, serving in such capacities as Chair of Neuro-Oncology, Medical Director of the Brain and Spine Clinic, Co-Director of the Brain Cancer Center, and currently Professor of Neuro-Oncology and Cancer Biology. He holds the Margaret and Ben Love Chair of Clinical Cancer Care and a dual appointment as Professor of Cancer Biology.

In addition to his work at MD Anderson, in 2016, Dr. Yung was named Special Advisor to the Chief Executive Officer of the National Brain Tumor Society, where he is guiding new and ongoing research and science policy in brain tumors.

In 1997, Dr. Yung and Dr. Steck’s laboratory discovered that the PTEN suppressor gene antagonizing the phosphatidylinositol-3-kinase (PI3K)/Akt/mTOR pathway is the tumor-suppressor gene that is frequently deleted or mutated in glioblastoma and is responsible for tumor progression.

Dr. Yung’s focus on the causes of glioblastoma multiforme led to his research in new therapeutic strategies targeting the EGFR and PTEN/PI3K pathways and the angiogenic regulatory mechanisms that promote glioma progression. And eventually, his research led to the U.S. Food and Drug Administration (FDA) approval of temozolomide for recurrent malignant glioma and glioblastoma multiforme in 1997. In 2009, based on a study coauthored by Dr. Yung, the FDA granted accelerated approval of bevacizumab (Avastin) for recurrent glioblastoma.

We cannot delay advancing progress in cancers like glioblastoma, pancreatic cancer, and hepatic carcinoma. We just need to roll up our sleeves and go to work.
— W.K. Alfred Yung, MD

Despite advances in the understanding of the causes of glioblastoma multiforme and new therapies to treat the disease, the cancer remains stubbornly among the deadliest, with survival rates inching from 9 months to 18 months over the past 3 decades. According to the National Brain Tumor Society, malignant brain tumors were diagnosed in about 25,000 people in the United States in 2016, and about 17,000 people died.

“Progress in this cancer is slow for a couple of reasons,” said Dr. Yung. “First, public funding for brain cancer is not as robust as it is for more common cancers because it doesn’t affect as many people. Second, glioblastoma is biologically complex. We learned a lot about the landscape of somatic genomic alterations in glioblastoma multiforme from The Cancer Genome Atlas Research Network, which helped us better understand the tumor and evaluate promising therapies, but progress could be faster. The other limiting factor for progress is the fact that the brain is well protected by the blood-brain barrier, so finding the right drug that gets to the right target is difficult.”

Still, Dr. Yung remains optimistic that advances in genomic sequencing; new technology like liquid biopsy, which can detect early-stage cancer, identify tumor-associated mutations, and monitor disease progression; a better understanding of the microenvironment of the cancer, including its immune environment; and more funding, will propel progress in this cancer over the next few years.

“The establishment of the National Cancer Moonshot, which is committed to making advances in difficult cancers, including glioblastoma, will result, I believe, in the greater sharing of scientific ideas, which will accelerate progress in the development of more targeted therapies,” said Dr. Yung. Those therapies will likely include a cocktail of multimodalities tailored to each patient’s individual tumor and designed to attack multiple pathways of the cancer. “We have radiation therapy, chemotherapy agents, immunotherapy agents, and more precise surgical techniques, but we cannot rely on these individual modalities alone. To see survival rates improve, we need to learn how to combine these therapies in a smarter way,” he said.

Dr. Yung’s impatience to see more effective therapies for life-threatening cancers is not just professional; it’s personal, too. In 1999, as he was beginning his leadership role in MD Anderson’s department of Neuro-Oncology and Cancer Biology, Dr. Yung was diagnosed with urothelial bladder carcinoma. Although successfully treated with chemotherapy and surgery, the cancer recurred in 2014, metastasizing to his lymph nodes. Immunohistochemistry analysis of his tumor found that it overexpressed HER2 and P53 gene mutations. He is currently being treated with targeted antibodies and is once again in complete remission.

The death of his sister at the age of 47 from hepatic carcinoma has also helped fuel his sense of urgency to accelerate the pace of progress in all difficult-to-treat cancers. “We cannot delay advancing progress in cancers like glioblastoma, pancreatic cancer, and hepatic carcinoma. We just need to roll up our sleeves and go to work,” said Dr. Yung.

Medicine Is the Family Business

In recognition of the contributions Dr. Yung has made over the past 4 decades, this past July, MD Anderson honored him with the establishment of the Beau Biden Chair for Brain Cancer Research in memory of Vice President Joe Biden’s son, Beau Biden, who died of glioblastoma on May 30, 2015. Dr. Yung was Beau Biden’s physician. 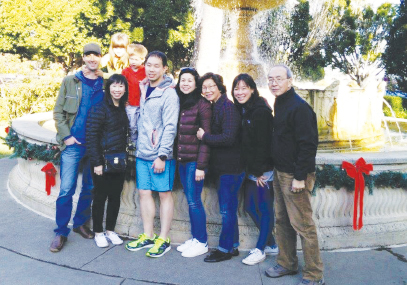 Dr. Yung (far right) with his wife, Susie (third right), and his family

Although it has been gratifying to be part of the evolution in major breakthroughs in brain cancer research and in new therapies that have extended survival in patients with the disease, Dr. Yung admits none of his accomplishments would have been possible without the support of his wife, Susie. Married 44 years ago, the couple first met as parishioners in the same church in Hong Kong. Trained as a physical therapist in her native country before joining Dr. Yung in the United States, Mrs. Yung gave up her career to support her husband and to raise the couple’s three children, Katherine Yung, MD, Associate Professor of Head and Neck Surgery at the University of California, San Francisco; Karen Yung, MSW, a social worker in the Stanford Blood and Marrow Transplant Program at Stanford Medical Center; and Joshua P. Yung, PhD, Assistant Professor in the Department of Imaging Physics at The University of Texas MD Anderson Cancer Center.

“Without Susie and without the sacrifice she made for having her own career, I would not be doing what I am doing today,” said Dr. Yung.