With a Strong Personal Connection to His Patients, Stephen P. Hunger, MD, Strives for a Cure for All Children With Leukemia

Our challenge moving forward is to find treatments to cure the remaining 10% to 15% of children who still die of ALL. Given our growing knowledge of the disease, I’m confident we will achieve that goal.

Nationally regarded children’s cancer specialist Stephen P. Hunger, MD, was born and reared in South Windsor, a small suburb of Hartford, Connecticut. Dr. Hunger grew up in the mid-1960s and 1970s, and in his words, “South Windsor was a pretty homogeneous experience. There wasn’t really any ethnic or income diversity. I had what would be considered a rather normal upbringing. I did well in school and played a variety of sports.”

Asked if any early experiences influenced his decision to pursue a career in medicine, he replied, “When I was about 5 or 6 years old, I became enamored of our family pediatrician, and it made me want to become a doctor also. I’m not sure exactly why other than he was so nice to me, so it wasn’t an informed decision, because I also wanted to be a professional shortstop, but that didn’t work out.”

After high school, Dr. Hunger went to college at the Massachusetts Institute of Technology (MIT) in Cambridge. “I chose MIT because my father was an engineer, and I felt that if I didn’t pursue a career in medicine, I’d probably become an engineer too. About 2 weeks into my first year, I hoped that medicine worked out, because my math skills were not up to par with many of the other students. I was good with arithmetic, but I didn’t have the raw conceptual talent for the discipline,” explained Dr. Hunger.

Compared with his early years in the Connecticut suburbs, Dr. Hunger said that his college experience exposed him to a highly diverse culture—people of all races, religions, ethnic, and socioeconomic backgrounds—which expanded his worldview. “I majored in biology and had some research experiences. I spent a couple of years working in a laboratory, studying well-nourished vs malnourished rats. There were better research projects out there, but that’s what I ended up doing, and it was a good way to get my feet wet in lab research,” said Dr. Hunger.

He continued: “In 1981, I entered medical school at the University of Connecticut, in Farmington. It was a state school, which was far less expensive than the private medical schools I applied to, which was a major factor in my decision. When I began my clinical work during medical school, I soon realized I didn’t have the disposition to become a surgeon and became attracted to pediatrics and internal medicine.”

Ironically, Dr. Hunger’s first exposure to oncology was almost his last. “My girlfriend, who later became my wife, was in medical school in Philadelphia, and I wanted to do a few pediatric rotations there to spend some time with her. I did a rotation and listed every specialty known to man; I believe pediatric oncology was last on the list, but that’s what they assigned me to,” said Dr. Hunger. 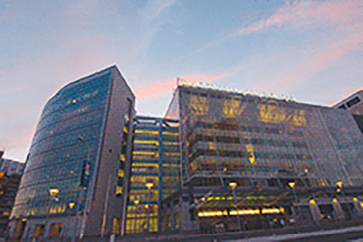 He specifically remembered doing an earlier rotation in gynecologic oncology, in which the surgeon sent him back to his office to get a chart on a patient. There was a huge row of file cabinets, and Dr. Hunger couldn’t find the patient’s chart. “Finally, the administrative assistant came in and asked me what was I doing. I said the surgeon sent me to find a chart for the patient he has in clinic, and she told me I was in the wrong area; these cabinets contained the dead patients’ charts. She directed me to a small cabinet off in the corner, explaining that it contained the live patients’ charts. I found the chart and thought to myself, boy I never want to do oncology,” admitted Dr. Hunger.

However, during his fourth year in medical school, Dr. Hunger was exposed to pediatric oncology, which changed his view about the discipline. “I found I really liked the pediatric oncology setting. It’s a data-driven discipline, and I felt you had the opportunity to help young patients facing life-threatening challenges; and there was also a strong bond between doctor and patient,” said Dr. Hunger.

Dr. Hunger began his residency in pediatrics at Johns Hopkins in 1985, first thinking of pursuing a career in neonatology. “However, in neonatology, you didn’t have long-term relationships with your patients, which was a turnoff for me because it’s something I valued. So, when I did my first hematology-oncology rotation as a first-year intern, I found that I loved pediatric oncology and decided to pursue it as a career,” Dr. Hunger revealed.

A Host of Mentors

Asked about mentors who helped shape his career path, Dr. Hunger said that he had several powerful influences. One was Brigid Leventhal, MD, a true pioneer in pediatric oncology who unfortunately passed away in 1994; ASCO has honored her with the Brigid Leventhal Special Merit Award. “Dr. Leventhal was my attending several times and impressed me with her personal connection to her patients. Another person who influenced my career was Michael Graham, MD, one of the faculty members at Johns Hopkins. I ended up following a number of patients with him, and he spent a lot of time teaching me how to do procedures and how to think about patients on an individual level, which has had a lasting impression on my career,” stated Dr. Hunger.

After his residency, Dr. Hunger entered a pediatric hematology-oncology fellowship program at Stanford in 1988, doing an additional 3 years in postdoctoral research in the pathology laboratory after finishing his fellowship. During his fellowship, Dr. Hunger noted several people who made lasting impressions on his clinical development. “Bertil Glader, MD, Director of the Hematology-Oncology Fellowship Program at Stanford, is a prince among men, one of the kindest people you’ll ever meet.”

Dr. Hunger noted his biggest career influence was former ASCO president Michael Link, MD. “I consider him the best physician I’ve ever met. His knowledge of pediatric oncology was awe-inspiring and more than a little intimidating. He influenced the way I’ve approached patient care and still does. I’m proud to call him a colleague and a friend,” shared Dr. Hunger.

Dr. Hunger recalled a time about 15 years ago when Dr. Link called him for advice about one of his patients. “When I hung up, I called my wife and said, you’re not going to believe this but Michael Link just called and asked for advice. That’s when I truly felt, wow, I must be doing something right.”

During his fellowship, Dr. Hunger became very interested in the care of patients with leukemia and searched for a research program. “It was late in the year, and I was uncertain about whose lab to work in. Finally, a couple of people told me to talk to a young researcher in pathology named Michael Cleary, MD. I spoke to Mike, and he took me on; I spent 5 years in his lab, and the experience had a profound influence on how I think about science. He’s the person who most shaped my future laboratory career,” Dr. Hunger declared.

Caring for Children With Leukemia

Dr. Hunger held faculty appointments in pediatrics as well as molecular genetics and microbiology at the University of Florida College of Medicine before moving to the University of Colorado and Children’s Hospital Colorado in 2007. In the fall of 2014, Dr. Hunger became Chief of Oncology and Director of the Center for Childhood Cancer Research at the Children’s Hospital of Philadelphia (CHOP). Asked why his career took him to CHOP, Dr. Hunger responded, “I felt it was the place where I could make the greatest impact on how we take care of children with cancer.”

From the time Dr. Hunger began his laboratory research as a fellow, his research and clinical careers have focused on developing a better understanding of childhood acute lymphoblastic leukemia (ALL). He was Vice Chair of the ALL committee of the Children’s Oncology Group from 2002 to 2007. Then he chaired the committee from 2008 to 2014.

“I’ve had the opportunity to work with the smartest people in the world trying to improve outcomes for children with ALL. During my career, I’ve seen cure rates go from 60% to 90%,” said Dr. Hunger. He added: “And thanks to the remarkable progress, we now tell families who have children with ALL that in most cases, it’s a curable disease, which as an oncologist is an incredible feeling.”

“Despite our progress, I’ve treated many ALL patients who weren’t cured, so our challenge moving forward is to find treatments to cure the remaining 10% to 15% of children who still die of ALL,” stated Dr. Hunger. “Given our growing knowledge of the disease, I’m confident we will achieve that goal.”

Asked what he does to de-stress from the rigors of his challenging career, Dr. Hunger said, “What little time I have is simply spent relaxing with family and friends.” ■