Woman With an Ovarian Tumor

The text and photograph here are excerpted from a four-volume series of books titled Oncology: Tumors & Treatment, A Photographic History, The Anesthesia Era: 1845–1875 by Stanley B. Burns, MD, FACS, and Elizabeth A. Burns. The photograph appears courtesy of Stanley B. Burns, MD, and The Burns Archive. To view additional photos from this series of books, visit burnsarchive.com. 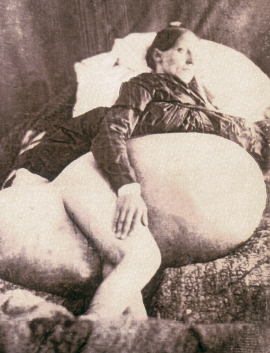 In June 1851, Philip J. Bruckner, MD, hired and escorted a daguerreotypist 220 miles to photograph this 275-pound, 33-year-old woman. She had borne five children while developing this massive tumor. Ovarian tumors grow to the largest proportions of any human tumor, and the size of this tumor captured the attention of the general medical community; hence, the arduous trip and photographic documentation. Dr. Bruckner had learned of this patient when Charles Beech, MD, of Wellington, Ohio, presented her case at a medical meeting. Dr. Bruckner published the case history along with a woodcut illustration made from the photograph in the Ohio State Medical Society Transaction in 1851. In 1859, the case and woodcut were reprinted in another medical journal.

An American surgeon, Ephraim McDowell, MD (1771–1830), made a great contribution to gynecology and abdominal surgery in the early 19th century when on December 25, 1809, he performed the first ovariotomy and exploratory laparotomy. The patient was Mrs. Jane Todd Crawford of Green County, Kentucky. Dr. McDowell rode on horseback 60 miles from his home in Danville to see a 47-year-old presumably pregnant woman. However, Dr. McDowell, instead, found she had an enormous tumor. Distressed by both the diagnosis and the difficulty she was having breathing, she decided to have the mass removed. Dr. McDowell requested the operation take place in his own office. This courageous woman rode on horseback the 60 miles to Danville, resting the tumor on the horn of her saddle.

With the help of only one assistant, Dr. McDowell commenced the surgery by opening the abdomen with a 9-inch incision, about 3 inches from the border of the left rectus abdominis muscle. This landmark operation took place during the preanesthesia, preantisepsis era. To stay calm, Mrs. Crawford recited psalms and sang throughout the procedure.

After opening the abdomen, McDowell inserted his hand into the cavity, found and ligated the ovarian pedicle. He then opened the sac and “took out 15 lbs of a dirty gelatinous looking substance from the tumor” before removing the remaining portion of the tumor, which weighed 7.5 pounds. The intestines had spilled out through the wound, and, after replacing them, he turned Mrs. Crawford on her side to help drain out the accumulated blood. Then he sutured the remnant of the ovarian pedicle to the lower end of the wound and closed the rest of the incision with interrupted sutures. The entire operation lasted just 25 minutes, and within 5 days, the remarkable Mrs. Crawford was not only up and about but even made her bed. Twenty-five days after the operation, she again mounted her horse and rode home. Mrs. Crawford lived another 30 years.

Dr. McDowell’s success was a small miracle in its time and resulted in an upsurge in the interest of gynecologic surgery. He is also considered the father of abdominal surgery, as this case was the first successful abdominal surgical procedure in which the peritoneum was opened electively. He went on to perform another 12 ovariotomies, with only 1 fatality. He reported his results after 8 years. Other surgeons, rather reluctantly in the 1820s, began to operate on ovarian tumors. Successfully performing ovariotomies defined a master surgeon in the early 19th century, and documenting large ovarian tumors became part of the culture of medicine during this era.

The publication of this photograph as a woodcut in 1851 was one of the first uses of photography in a medical journal. Although it was not offered as an original print, it was still a landmark presentation. The original daguerreotype was eventually given to the Boston’s Warren Anatomic Museum. However, in the early part of the 20th century, it was lost or destroyed, as were other early medical images. In a review of 24 American medical journals, 1841 to1859, this woodcut was the sixth photographic image published. Although the original daguerreotype has never been found, 19th-century paper prints of the daguerreotype were discovered in the 1980s. This is the first time a true photographic image of the patient has been published.