I’m Not Too Young for Colorectal Cancer

Before my cancer diagnosis, I thought I had all the time in the world to accomplish my life’s goals. Now I know that isn’t true.

The first symptoms I had of colorectal cancer—blood in my stool and abdominal pain—coincided with surgery I had to remove my appendix in the spring of 2017. My surgeon attributed the symptoms to the appendectomy and to the medications I received both before and after the surgery. In addition to those factors, I was just 44 at the time—too young to have colorectal cancer, my surgeon assured me. But as the spring and summer wore on, the severity of my symptoms increased. 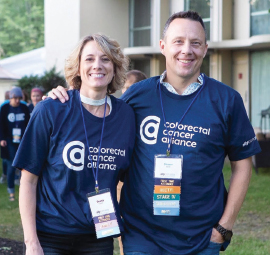 Shawn Farrah and his wife, Deana, at the Colorectal Cancer Alliance AllyCon 2019 National Conference in Boston.

By the fall, the rectal bleeding and abdominal cramping became so concerning, I saw my primary care physician, who recommended a colonoscopy. The test found a large mass high in my rectum, and a biopsy of the tissue confirmed it was malignant. Subsequent CT and MRI imaging found the cancer had spread to nearby lymph nodes. I had stage III colorectal cancer.

I don’t think anyone is prepared to hear the words, “You have cancer.” For me, the news was especially shocking because it never occurred to me that I could have cancer, even as my symptoms increased. I am a marathon runner and eat a healthy diet, there is no history of colorectal cancer in my family, and I’m young. Sequencing of the tumor also failed to turn up driver gene mutations that might explain the development of early-onset colorectal cancer.

Although the diagnosis was terrifying, my oncologist reassured me that although I had late-stage disease, he was certain the treatment plan he was recommending—neoadjuvant capecitabine and radiation therapy to shrink the tumor, followed by surgery to remove part of my rectum, and finally a regimen of FOLFOX (fluorouracil, leucovorin, and oxaliplatin) to kill any remaining malignant cells—would give me a good chance for a potential cure. However, 6 weeks after the surgery, a PET scan detected four spots on my liver. Now, the cancer was stage IV, and my chance for a cure dropped precipitously low.

My oncologist immediately started me on FOLFOX. Because I have RAS wild-type metastatic colorectal cancer, she added the monoclonal-antibody panitumumab to the treatment regimen. Within 2 months, the lesions in my liver nearly completely disappeared. Surgery removed the remaining remnants of the tumors, and monthly imaging scans over the past year show no sign of recurrence. I don’t know if I’m cured of this cancer, but I am staying positive and concentrating on what my oncologist told me at my last office visit: “There is no evidence of disease.”

Since my diagnosis, I’ve learned that young-onset colorectal cancer is not a rare occurrence. In fact, since 1994, the incidence of colorectal cancer in people younger than age 50 has been increasing by 2% every year. Also disturbing is the fact that 50% of patients with early-onset colorectal cancer, like me, have neither hereditary syndromes nor familial disease.1 I now know that being young doesn’t exempt you from developing this cancer.

When I was diagnosed with metastatic colorectal cancer, I wasn’t given an expiration date. My oncologist never gave me a survival prognosis, and I didn’t ask for one. Instead of concentrating on the 5-year survival percentages for someone with stage IV cancer, I’m choosing to remain focused on today.

“Instead of concentrating on the 5-year survival percentages for someone with stage IV cancer, I’m choosing to remain focused on today.”
— Shawn Farrah

Before my cancer diagnosis, I thought I had all the time in the world to accomplish my life’s goals. Now I know that isn’t true; if there is something I want to do, such as take a vacation, I don’t put it off for some future date.

With cancer, you learn to live with uncertainty, and that can be a positive way to focus your priorities and not take the time you have for granted. I didn’t realize how fragile life is until I got a life-threatening illness. That’s a good lesson to learn whether you have cancer or not.

3. Centers for Disease Control and Prevention: Colorectal (Colon) Cancer. What Should I Know About Screening? Available at www.cdc.gov/cancer/colorectal/basic_info/screening/index.htm. Accessed June 3, 2020.