AIDS Research Led to Appreciation of the Power of Plants and Integrative Medicine in Cancer Care for Donald I. Abrams, MD

The path that led Donald I. Abrams, MD, to a career in oncology was a circuitous one. Although his love of science began when he was a student at Cleveland Heights High School in Ohio, and continued during college at Brown University, where he received an AB in molecular biology in 1972, he was first drawn to psychiatry while in medical school at Stanford University School of Medicine. However, during his clinical rotations in London, Dr. Abrams did his first clerkship at Maudsley Hospital, the largest mental health training institute in the United Kingdom, hoping to solidify his career choice. He was dismayed by the inconsistencies in diagnostic labels and treatment interventions between the United States and Great Britain, which convinced him to abandon psychiatry as a profession.

“Before moving to London, I had worked at McLean Hospital, a psychiatric affiliate of Harvard Medical School, in Belmont, Massachusetts, where I learned about borderline personality disorder,” shared Dr. Abrams. “But when I was training at Maudsley Hospital, I was disturbed that illnesses we characterize as depressive disorder in the United States are referred to as psychotic disorders in England. There was also inconsistency in therapeutic interventions, which was disturbing. I thought, I’m not going to make it as a psychiatrist because there are not consistent psychiatric diagnostic classifications across cultures.”

When Dr. Abrams returned to the United States, he completed his medical training at Stanford, graduating in 1977. He then moved to San Francisco to begin his residency in internal medicine at the Kaiser Foundation Hospital, which cemented his passion for medicine. “I loved being at Kaiser. It is where I learned about medicine and how to be a clinician,” said Dr. Abrams.

Kaiser is also where Dr. Abrams developed an attraction to the subspecialty of oncology, which would become his lifelong career passion. While at Kaiser, he began to see the first unexplained cases of chronically enlarged lymph nodes in young gay men, the early signs of what is now recognized as AIDS, caused by HIV.

Finding a Calling in Medicine

Dr. Abrams was born in New York City on June 1, 1950. Although he never thought about a career other than medicine, he can’t explain why the profession held such allure for him from a young age. “My father received a degree in journalism from New York University, but no one else in my family had gone to college, and there were no role models in my life to spark my early interest in the field,” said Dr. Abrams. “So, I can’t explain the attraction to medicine.”

Now in his fifth decade as an oncology clinician/researcher, Dr. Abrams is heralded for pioneering investigations into the development of effective treatments for AIDS. These efforts included his early evaluation of the use of complementary interventions, such as medical marijuana to combat cachexia and peripheral neuropathy in patients with AIDS, and his later work in establishing integrative medicine in oncology as an integral part of care for patients with cancer.

In 1981, while a fellow in hematology/oncology at the University of California, San Francisco (UCSF) Cancer Research Institute, Dr. Abrams elected to spend a year working in the retrovirology laboratory Harold E. Varmus, MD, and J. Michael Bishop, MD, had established at UCSF. They were studying the cellular origins of the oncogene of a chicken retrovirus. (The two would later become co-recipients of the 1989 Nobel Prize in Physiology or Medicine for their discovery.)

However, just 8 months later, Dr. Abrams left the laboratory. His colleague, Paul Volberding, MD, MACP, now Professor of Epidemiology and Biostatistics at the UCSF School of Medicine and an early researcher in HIV-related malignancies and antiretroviral therapy, suggested Dr. Abrams work in a new clinic he had just opened at San Francisco General Hospital. Dr. Volberding was treating patients with Kaposi sarcomas and Pneumocystis carinii pneumonia, which were being diagnosed in gay men.

Having come out as gay several years before, Dr. Abrams took this new challenge personally. “This became my new mission. My community was being decimated by this cancer, and I was an oncologist. I knew this is where I needed to be,” he recalled.

As word began to spread about the work Dr. Abrams was doing with patients with AIDS, he received a small grant from UCSF to study a syndrome of persistent generalized lymphadenopathy in gay men, which was found to be a part of a spectrum of this new disease. Clinical trials investigating effective treatments of lymphadenopathy syndrome to prevent disease progression to AIDS followed, but effective treatments for the disease remained elusive.

“We were investigating any therapy that might benefit patients, including a study of AL-721, a lipid compound of neutral lipids, phosphatidylcholine, and phosphatidylethanolamine; alpha-interferon; interferon-gamma; and interleukin-2. We did everything we could, and still everybody died,” said Dr. Abrams.

According to the World Health Organization, since 1981, 75 million people have been infected with the HIV virus, and about 32 million have died.1 Among those deaths was Dr. Abrams’ partner, Mark, in 1989, a loss he still mourns today.

“Three of my four grandparents died by the time I was 2, and I think my mother instilled in me a fear of losing people I love. I believe it is my fear of losing loved ones that drew me to oncology as a way to inure myself to that kind of pain,” he said.

The turning point in the AIDS epidemic came in 1995, with the advent of the development of protease inhibitors. These therapies led to dramatic reductions in death rates and fewer incidences of wasting syndrome and AIDS-related dementia. It also marked a return of Dr. Abrams’ full-time attention to the treatment of patients with cancer. He developed a renewed appreciation of the power of plants as complementary medicine in combination with conventional oncology care, which had been sparked during his early medical studies in London in 1975. His interest in botanical therapies led him to complete a 2-year fellowship in the Program in Integrative Medicine at the University of Arizona in 2004, which he considers a “game changer” in his oncology career.

“After completing the fellowship program, I knew I wanted to devote my energy to integrative oncology, working with patients living with and beyond cancer.”
— Donald I. Abrams, MD

“After completing the fellowship program, I knew I wanted to devote my energy to integrative oncology, working with patients living with and beyond cancer. I wanted to help them to combine complementary therapies, including nutrition, physical activity, mind-body management, traditional Chinese medicine, stress reduction, and medical cannabis, with conventional cancer treatments,” Dr. Abrams stated.

In 2010, Dr. Abrams was elected President of the Society of Integrative Oncology. Further, he has been a long-time ASCO volunteer. He is Professor of Clinical Medicine at the UCSF School of Medicine, provides integrative oncology consultations at the UCSF Osher Center for Integrative Medicine, and is a medical oncologist at the Zuckerberg San Francisco General Hospital.

Married to his husband, Clint Werner, for 25 years, Dr. Abrams, now aged 70, is planning to limit his clinical practice to 2 days a week this year to make time for his other interests: travel (especially to chase total solar eclipses), hiking, yoga, and raising long-haired dachshund show dogs. While Dr. Abrams is looking forward to having more unstructured time, he bristles at the idea of retiring from medicine entirely.

“In my discussions with Clint about why I’m not going to completely retire, I’ve said that like many physicians, I’m defined by what I do,” admitted Dr. Abrams. “I love the practice of oncology and love helping people, so why would I give that up?” 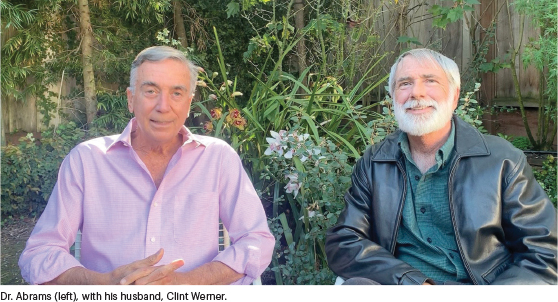 A Diverse Career and a Life Well Lived

When asked how he was able to avoid emotional exhaustion and physician burnout during his long medical career, especially at the height of the AIDS epidemic when so many of his patients died, Dr. Abrams offered this assessment of his life. “For me, the key to a quality and fulfilling career in medicine is to keep reinventing yourself. The fact that I was able to treat patients with AIDS, care for patients with cancer, investigate the clinical benefits of medical cannabis, and have a separate career in integrative oncology has kept me invigorated over my long career. I can’t think of anything I regret. I’ve traveled the world, and best of all, I’ve helped people overcome serious diseases. I couldn’t have asked for a better life.”

DISCLOSURE: Dr. Abrams has served as a consultant or advisor to Axim Biotechnologies and Tikun Olam and receives royalties from the textbook Integrative Oncology.